Donald Trump can't truly win: Why we must not ignore that the Left is still growing too

While far right forces have gained steam in recent years, they're outnumbered by a revitalized progressivism 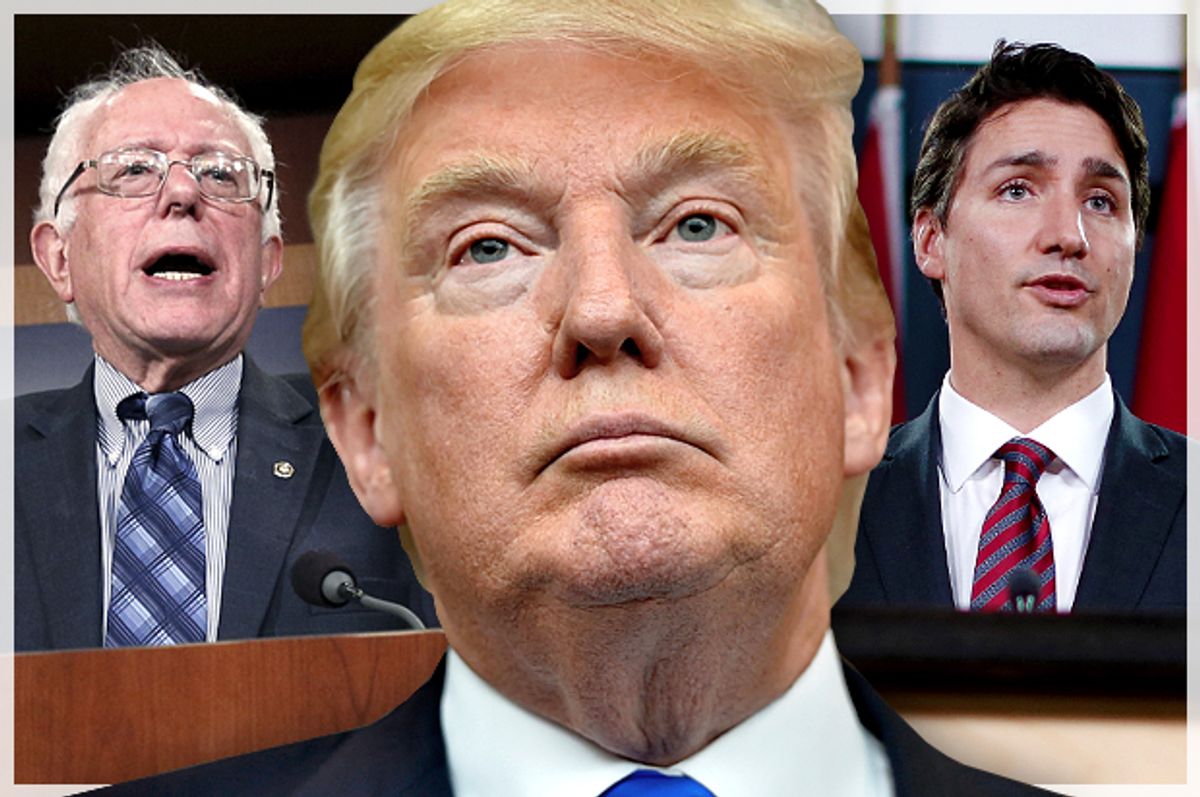 There has been a lot of ink used on the disturbing growth of neo-fascist movements in France and England, as well as whatever Donald Trump is doing in the United States, but electorally, these groups have seen very little in the way of results. The existence of fascists within any level of government is of course cause for concern, especially in three countries so completely shaped by World War II; far-right nationalism, however, seems to still go too far, even for nations that have become slowly more conservative over the years. And while it’s disgusting that we’re even entertaining the idea of someone like Donald Trump or Marine Le Pen as a global leader, the left should take heart in one thing: in these three countries, at least, it still has the upper hand on the right.

Most recently, big promises have been made by Marine Le Pen in France and Nigel Farage in the UK to take crucial steps toward mainstream success. Earlier this month, National Front (Le Pen’s party) capitalized on poor turnout and fears following the terrorist attacks in Paris to win the first round of voting in France’s regional elections; in the second round, however, center-left candidates dropped out of unwinnable races and urged their supporters to vote for candidates from the more conservative mainstream party. Turnout also ticked up a full 8%, and the result was a huge loss for Le Pen’s party.

Farage has fared much worse. The loud leader of the UK Independence Party promised supporters a big victory in May’s parliamentary election, but he failed to win his seat and initially tried to resign from his post. In fact, while UKIP capitalized in the dramatic fall of the Liberal Democratic Party to become the third biggest party in the election vote-wise, they won just one seat in Parliament, and that was the re-election of an MP who had initially been elected as a conservative. (Coincidentally, Farage seems to want to kick this one MP, Douglas Carswell, out of the party.)

Finally, Trump, who is playing to the xenophobic wing of the American conservative movement, has dominated the early Republican national primary polling, and is causing massive concern within the party’s establishment about his electability in the general election. Trump’s lead slims a bit, however, when looking at how he’s doing in the individual early primary states, and with a month and a half to go before the official start of primary season, it’s still an open race for the nomination.

Yes, these far-right parties can claim some victories that they’ve never had before, such as wins in the European Parliament (albeit largely being due to low voter turnout) and Trump — who even the European fascists think is a little too out there — has capitalized on an existing, tumultuous intraparty struggle between mainstream conservatives and the Tea Party for control of the Republican Party. Regardless of all of this, however, the polar opposites of these candidates — socialists and far-left progressives — have done much, much better in capturing the support of the mainstream, and more importantly, seem to be more palatable to the general public than their far-right counterparts.

France, to start, is led by the Socialist Party which, much like the UK Labour Party, has drifted away from the far left over the years, and President François Hollande’s initial attempts at fighting austerity and moving France towards a Scandinavian-style social democratic state have eroded somewhat as he has tried to win back the support of French voters ahead of the 2017 presidential election. Still, Hollande’s party is rooted in the global left, and even the French far-left in opposition to him has 15 seats in the country’s general assembly compared to just 2 for Le Pen’s party. And before socialists in the United States and United Kingdom courted unforeseen mainstream popularity, Jean-Luc Mélenchon, a far-left former member of the Socialist Party who ran for president in 2012 on a broad coalition of leftists (including the French Communist Party) and won 11 percent of the voting in the first round, did the same in France. As Clément Petitjean noted in an essay for Jacobin earlier this year, the group to the left of Hollande hasn’t found sustained success, but Mélenchon did prove that there was room for dissent within the French left, even as it saw its best opportunity to end seventeen straight years of conservative rule by voting for Hollande.

In the UK, the far left has seized control of the Labour Party for the first time since the 1980’s. After Ed Milliband’s crushing defeat, the expected result was that the new leader would be somewhere to the right of Milliband but the left of Tony Blair; instead, a thirty-plus-year backbencher named Jeremy Corbyn dominated the polling throughout the entire election and won with nearly 60 percent of the vote. Corbyn has faced backlash within his own party for being too far to the left and former Prime Minister Tony Blair said that Corbyn’s leadership would “annihilate” the Labour Party, but recent polling has Labour closing the gap with Prime Minister David Cameron’s Conservative Party in opinion polling.

Bernie Sanders’s rise in the Democratic presidential primary, though, is the most surprising of all three. The U.S Democratic Party, unlike the Socialist Party in France and the Labour Party in the UK, has never been a welcome home for socialists, which is why Sanders is an independent (although he does caucus with the Democrats in the Senate). Both parties have been fiercely anti-communist since the Bolshevik Revolution, but Sanders has struck a chord with young voters within the Democratic Party base that seems to have surprised even him, and he’s done it while openly calling himself a democratic socialist who is looking to model the social programs of the United States on those of Sweden and Denmark.

Polling this far out from the actual nomination is, of course, not the most trustworthy measure of a candidate’s real popularity, but it shows that Sanders is a demonstrably important and trusted voice in American politics. He’s been a major reason why Clinton has veered to the left in this campaign when compared to her doomed 2008 campaign against Barack Obama.

Most importantly, however, is that Sanders has been embraced by Democrats in a way that Trump, another party outsider, hasn’t by Republicans. While Sanders has fought with the DNC and its chairwoman Debbie Wasserman-Schultz (who hasn’t officially endorsed anyone, wink wink) over the number of debates scheduled and now the voter file, Sanders — an independent — is polling with nearly 31 percent of the vote among Democrats against the party’s most well-connected figure.

Socialists have argued that a true run from the left would be in the form of an independent campaign, but in the U.S, the odds are so stacked against an independent candidacy that only the extremely wealthy — Ross Perot in 1992 and 1996, and possibly Trump in 2016 — are able to mount successful, well-funded campaigns outside of the two-party system. Sanders has an uphill battle to win the primary, but as Bhaskar Sunkara concluded earlier this year, “When he fails, there’s every reason to believe that radical voices can take his place, carrying the memory of [Eugene] Debs back into the political mainstream.”

For the world’s socialists and progressives, it’s increasingly hard to find a silver lining in a world where Trump and Le Pen seem like legitimate candidates to lead two of the world’s largest economies, and where mainstream liberal and conservative policies haven’t done anything to stem the explosion of income inequality. But as Sanders and Corbyn are proving, the left isn’t dead yet; if the grassroots activism that has boosted these individual campaigns into mainstream success can move towards a dynamic, top-to-bottom organization, these groups are going to be able to compete with liberals for control of the left for years to come. If that’s the legacy of Bernie Sanders and Jeremy Corbyn, then the left is going to emerge as a force in those countries for years to come.