If "Sisters" is a chick flick, so is the new "Star Wars": Stop believing there are movies men won't get 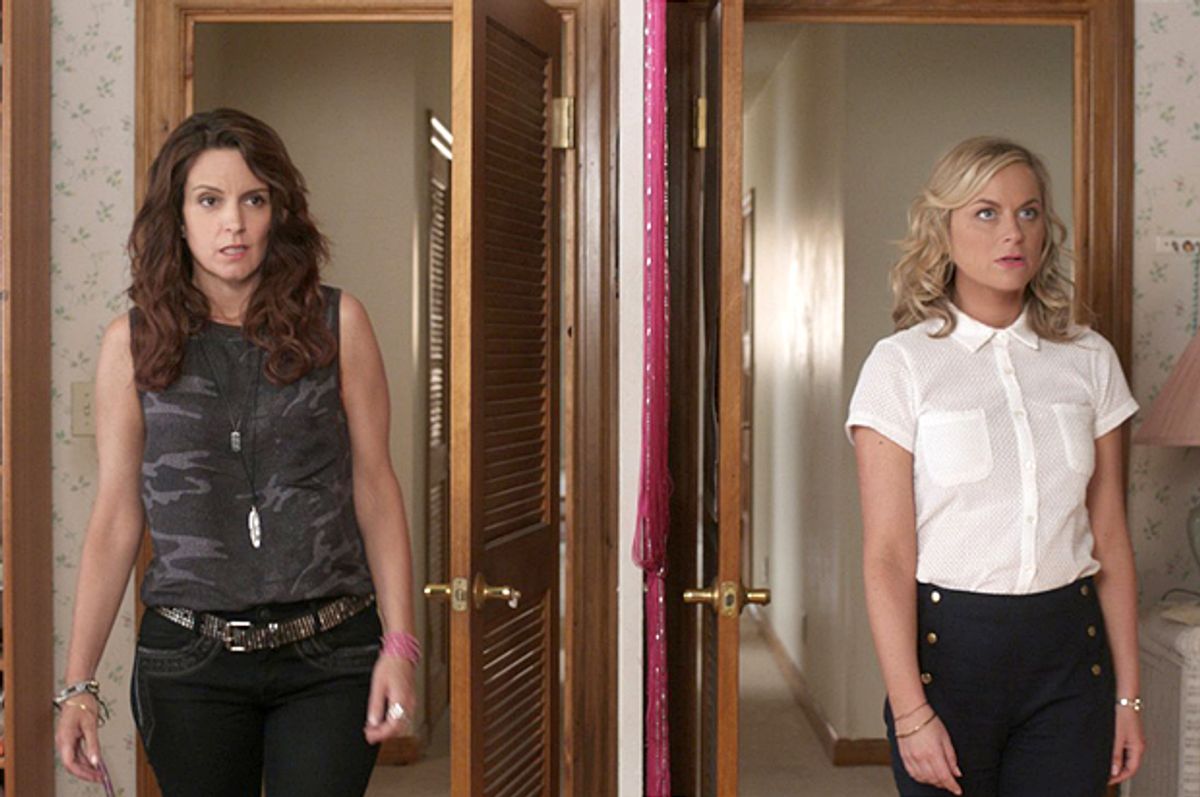 Two people meet at a bar and have a one-night stand. Due to unforeseen complications, they decide to go their separate ways until they meet again a few months later. They have an instant connection and feel themselves falling for each other. There’s one problem: She still has a boyfriend. She later breaks up with her beau. The man and the woman then go on a romantic trip together to see where their attraction is headed. They decide to be in a relationship. They talk about life, love, and their desires and goals.

Dudes out there, that sounds like the plot of a pretty gross chick flick, right? Like something you would never ever watch? This one might interest you instead:

Two very different siblings have fallen on hard times. One is recently divorced, while the other just can’t get it together or hold down a job. After their parents decide to sell their childhood home, they decide to have one last rager to commemorate all the wild parties they threw together in high school. They invite all their friends—who proceed to drink, do lots of drugs, and trash the house. It all turns out OK in the end because it’s a movie, and they all got to learn valuable life lessons while having a totally rad time.

That’s a lot better! You would definitely watch this movie, which could star Will Ferrell, Mark Wahlberg, Channing Tatum, Vince Vaughn, or any number of bro-approved actors. Jonah Hill and Seth Rogen would be hilarious in this. It would be the frat comedy event of the year.

If the plot sounds a bit like “Neighbors,” “The Hangover,” or any other movie where the male cast parties so hard that they engage in major property damage, it actually describes “Sisters,” the new Tina Fey-Amy Poehler comedy that bravely opened opposite “The Force Awakens.” Meanwhile, the first synopsis is for “Master of None,” the acclaimed Netflix comedy starring Aziz Ansari (“Parks and Rec”). Ansari’s show roughly apes the basic plot of any modern rom-com: Two people meet, but obstacles stand in the way of their being together. They will resolve the situation by finding out that it wasn’t nearly as complicated as we all thought and conquer the film’s contrivances.

But what makes “Master of None” a great example of the genre is that it inverts the expected formula. In a traditional romantic comedy, the chief engine of tension is the barriers that keep the lovers apart, usually a series of misunderstandings that will be later sorted out (see: “Bridget Jones’ Diary,” half of the subplots in “Love Actually”). But “Master of None” illustrates that commitment itself is the complicated part—like the little fights that turn into major, relationship-defining issues and the life goals that may drive us in different directions. Rom coms cheat us by not telling us what happens after the credits roll (sure, they get together, but how do they stay together?), and “Master of None” finally shows us what’s behind the curtain.

“Master of None” joins a number of shows that are rethinking the romantic comedy on television (including Hulu’s “The Mindy Project” and Amazon’s “Catastrophe”), but I’ve never once heard the show described as a rom-com or likened to a “chick flick.” Meanwhile, “Sisters” has been branded with the pejorative term, even though the film has little to do with the nebulous, hazily-defined genre. That labeling is reminiscent of recent movies like “Jupiter Ascending,” the Channing Tatum-Mila Kunis space opera dismissed as a “sci-fi chick flick,” and “The Hunger Games,” which a 2012 post from Crushable called a “chick flick in disguise.”

If movies as wide-ranging as “Pitch Perfect,” “Wild,” and even “August: Osage County”—the 2013 adaptation of Tracy Letts’ Pulitzer Prize-winning play—have been categorized as “chick flicks,” what does that term even mean, anyway?

The phrase dates back to 1988, coined in New Jersey’s Bergen County Record as a way to describe exploitation films like the Roger Ebert-penned “Beyond the Valley of the Dolls” and "Black Mama, White Mama,” a seminal entry in the “women in prison” genre. The following year would prove a pivotal year for female-driven entertainment: Nora Ephron’s “When Harry Met Sally…” defined the modern romantic comedy, a genre that would be dominated in the 1990s by Julia Roberts. The A-lister became a household name following 1989’s “Steel Magnolias,” which MTV’s Tess Barker explains was “one of the first movies to be dubbed a ‘chick flick.’”

The term would come to describe a range of movies that used to be called “women’s films”: Applied to “All About Eve” or “Now Voyager,” these movies often had predominantly female casts and women in a majority of the lead roles; in George Cukor’s “The Women,” not a single man appears on screen the entire film. But the current “chick flick” designation is less based on films that take women’s stories seriously than movies it's assumed men don’t want to see. Ephron’s own “Sleepless in Seattle” hit the nail on the head in a scene where Meg Ryan and Rosie O’Donnell watch “An Affair to Remember.” O’Donnell asserts, “Men never get this movie.”

If Dr. Pepper famously marketed its 10-calorie diet soda as “not for women,” calling something a “chick flick” means men beware. What’s depressing about this calculus is that it works: The audience for “Bridesmaids” was two-thirds women, while 74 percent of “Pitch Perfect” ticket buyers were female. These viewership ratios are true across nearly all movies marketed to men, even though women account for a majority (52 percent) of moviegoers, and dude-centric tentpoles like “Furious 7” boast audiences that are evenly split along gender lines.

There’s a reason that women don’t have a problem seeing “guy movies.” As Meryl Streep famously argued, men might have a difficult time relating to female protagonists, but women have been forced to identify with men all their lives. When they watch “Mission Impossible” or “Back to the Future,” women see the movie unfold from the male lead’s POV. “You know, you're not aware of it but you're following the action of the film through the body of the protagonist,” the actress told NPR’s Terry Gross. “You know, you feel what he feels when he jumps, when he leaps, when he wins, when he loses.”

This is because women already realize that there’s little that separates “chick flicks” from every other movie. As the Guardian’s Jenny Colgan points out, classic guy flicks like the “Terminator” look pretty familiar to female audiences: “ A man sends himself through an impossible loop in time to find the woman he loves and father a very special baby.” Huh, that sounds like a chick flick, now doesn’t it? And what are male-driven franchises like “Transformers” or “Fast and Furious” if not romances: Instead of falling for another person, these movies are about our love of cars and ultraviolence. And the connection between bromances—like “I Love You Man” and “Superbad”—and rom-coms is so explicit that it’s even on the label.

Colgan argued that the answer is to ban the term “chick flick,” but I don’t think that addresses the lingering question: Why is appealing to women a bad thing? In a society where femininity itself is so heavily stigmatized, we shouldn’t run from the female audience. Instead, let’s take the term “chick flick” back by recognizing that every movie is a “chick flick”—from “Sisters” to “The Force Awakens.” After all, “Sisters” might seem like female counterprogramming—positioned in contrast to J.J. Abrams’ franchise relaunch—but it’s no more feminine than the story of a young woman who goes on a journey to realize her destiny and help save the galaxy in the process.

Sure, “Sisters” might be a “chick flick,” but as “Master of None” and “The Force Awakens” prove, lots of other things you like are pretty girly, too.