Take this, Fox News: Wal-Mart, Chick-Fil-a and the War on Christmas we should all get behind 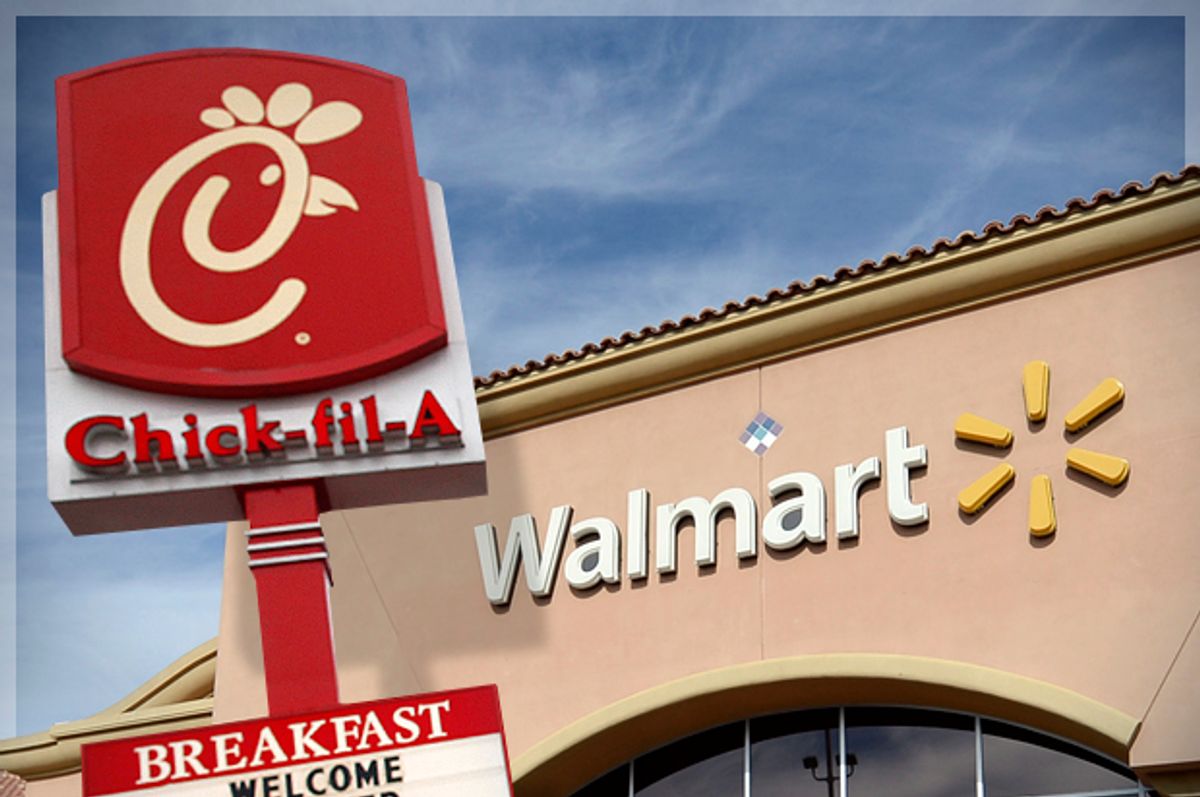 Donald Trump is constantly bemoaning the “War on Christmas” and ripping Starbucks for its plain red cups.

“I tell my wife don’t go to those stores, I want to see Christmas,” he told attendees at the 2015 Values Voter Summit.

But the Donald is a rhetorical Christian soldier. Real believers take the Fox News “War on Christmas” talking point seriously. Some, such as evangelical brand specialist Chris Stone, are acting on it.

Stone—the founder of Faith Driven Global—launched a Christian retail index earlier this year, which seeks to harness the $30 billion in Christmas buying power of the nation’s “Biblically Orthodox Christians.”

As Stone sees it: “Today’s marketplace is tribalized.”

Stone’s base of evangelical BOCs are already almost as tribal as the Williamsburg Lubavitchers. The BOCs have their own Boy Scouts (Trail Life U.S.A.), Girl Scouts (American Heritage Girls), and their own Liberty University. They even read their own newspapers, like the dreary, tendentious Washington Examiner, where Stone announced his 2015 “ChristmasBuycott”—complete with a hashtag, of course.

A “buycott” is the flip side of a “boycott.” It guides faithful consumers toward Christian-friendly retail outlets, while ranking the places they can avoid by spending their money with merchants who share their biblical worldview. I’m not sure there’s a difference, but Stone argues that a buycott is not as negative as a boycott. Informing these buycott consumers is Stone’s Faith Equality Index—a ranking of “how well brands acknowledge Faith Driven Consumers (FDCs) by welcoming, embracing, and celebrating them.”

Stone’s Index draws heavily on the Human Rights Campaign’s “hugely successful” Corporate Equality Index, which ranks brands, workplaces, and retail outlets by policies and practices regarding the LGBTQ community—and has even been “largely successful in compelling brands to include transgender transition in health coverage.” The Faith Equality Index site even compares HRC rankings with each product or outlet it ranks—a subtle “buy here or buy queer” message.

The Index includes a leaderboard where a consumer can track the FDC-plus points earned by reaching out to brands and recruiting family and friends. The real-time competition invites FDCs to engage in a mercantile evangelical movement that rewards the faithful and punishes the not-so-faith-friendly retailers.

Starbucks was an early buycott target. Like Trump, Stone came down hard on Starbucks after it replaced its traditional “Christian-themed” cups with a “solid red blank canvas design.”

Stone’s Index directed believers looking for a more Christ-centered cup of coffee to Dunkin’ Donuts, which honors the faith by serving coffee in red cups emblazoned with the word “Joy.” Krispy Kreme donuts is offered up as another option.

Here’s the FEI as pitched in one of its promotional e-mails. (Attend a Faith & Freedom convention, or a Values Voter Summit, and you, too, will be on the mailing list.)

But paychecks are lean. Cracker Barrel servers earn an average $3.52 an hour (plus tips), and cashiers get $8.40 an hour. The chain’s management has an affinity for right-wing politicians. In fact, former House Majority Leader Tom DeLay almost ended up in prison, partly because of the money the chain’s CEO lavished on him.

The FEI’s top-ranking restaurant, though, is Chick-Fil-A, which pays its cooks from $7.70 to $9.41 an hour and its team leaders $9.81. It is privately held, so executive compensation isn’t published, but co-owners Dan and Ronald Cathy are worth $1.5 billion each, according to the PrivCo research firm. The chain was mired in controversy in 2012 for its openly anti-gay politics; millions of company dollars were funneled through the Cathy family’s WinShape foundation to anti-LGBTQ groups like the Family Research Council.

The Waltons also own the top-ranking grocery chain on the Index, Walmart. With $487.7 billion in annual revenue in 2014, Walmart is the world’s largest company. Yet, it wasn’t until April 2015 that it increased its salaries from minimum wage to $9.00 an hour in response to a protracted and ongoing fair-wage campaign advocating for a living hourly wage of $15.

Plus, when it comes to political donations, you could say the Waltons are the Koch Brothers of big grocery retail.

The Index might be useful to the secular shopper, or the Christian not completely given over to Biblical orthodoxy.

It’s not entirely reliable. (Bank of America is an FEI loser; but that’s no reason to champion that behemoth). But turned on its head, the Faith Equality Index is a decent consumers’ guide that will at least keep the alert secular shopper out of Walmart, Cracker Barrel, and Sam’s Club.

There’s some value in that.

Originally published by the Washington Spectator