Actually, the right invented the "War on Christmas": The real history behind today's phoniest persecution

Say "happy holidays" and Bill O'Reilly will howl. Christians, though, fought to suppress the holiday for centuries 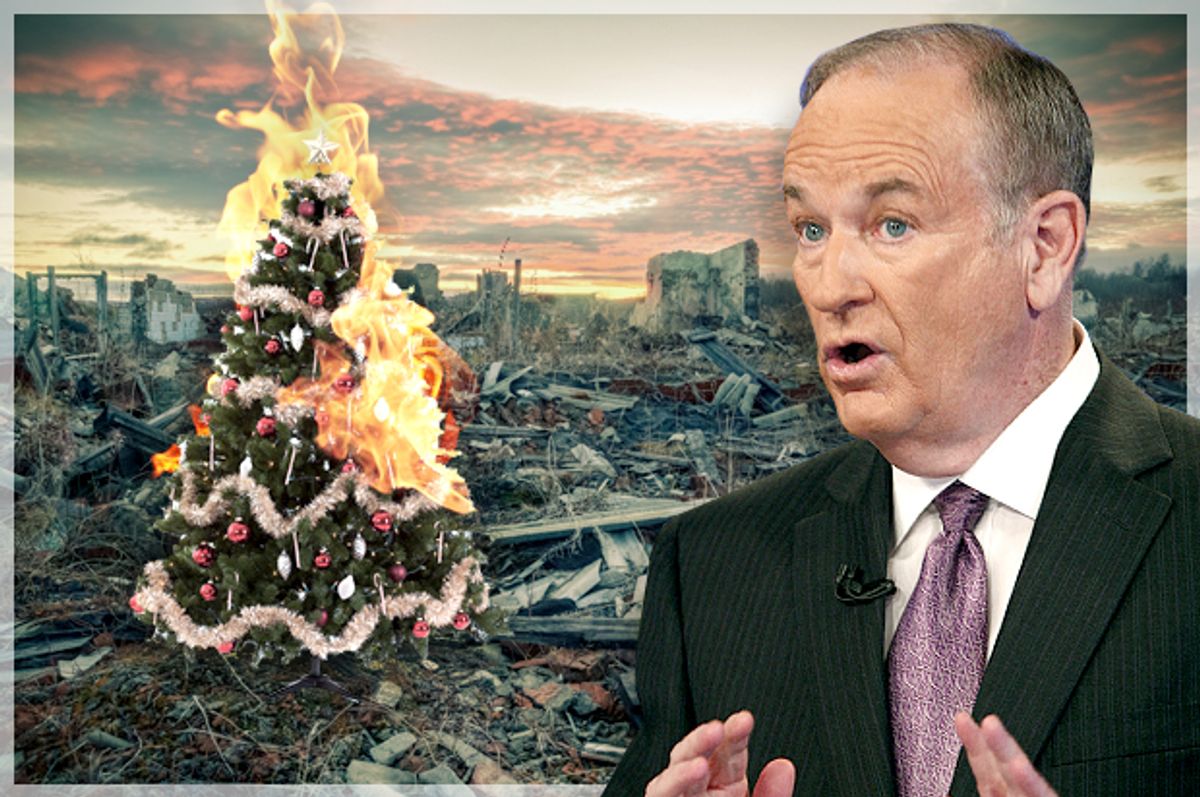 In November 2007, the American Family Association found itself in a state of panic. The collective cold sweat came after the self-proclaimed culture war crusaders saw that the word “family” — not “Christmas” — appeared before the word “tree” in the slick pages of Lowe’s just-released holiday catalog.

The organization quickly alerted its members. “The ads mentioning ‘Christmas’ cover only 12 square inches of the 5,236 square inches available,” the AFA notice said. “Lowe’s even has one of their Family trees turned upside down on a stand.”

The reaction was swift and severe: AFA members clamored to their phones and keyboards to reprimand the home improvement store’s corporate offices for such errant and offensive diction. The same day, a Lowe’s spokesman issued an apology, saying that the word swap was a mistake, and that they were “disappointed in the breakdown in [their] own creative process.”

Awash in victory, the AFA later wrote on its website that “Lowe's has contacted the AFA and assures us that it is proudly committed to selling Christmas trees this year, as it has done in the past.”

That day marked one battle the AFA had won amid the interminable “War on Christmas,” but the nonprofit knew that many more loomed. In the years since the Lowe’s incident, the American Family Association has fought against any and all actors they believe are attempting to secularize the United States — a process that, if successful, the group fears will gut the country of its moral foundations.

This “War on Christmas,” AFA executive vice president Ed Vitagliano wrote in a November 2015 missive, is part of a “wider attempt to secularize the nation.” Such a move, Vitagliano continued, is “bad for America and ultimately threatens the very existence of the Republic.”

Vitagliano’s fear of a godless, “family tree”-filled world where citizens can barely find the wherewithal to whimper “Happy Holidays” to one another may very well be a Salvador Dalí-esque study in hyperbole. His worries of a war on Christmas, however, are not that far outside the realm of historical reality. Indeed, one of these wars has already taken place on American soil, and is older than the United States itself. Unlike today’s so-called War on Christmas — which the AFA claims has been ongoing for nearly the past decade — this war lasted for nearly 200 years, and was waged by Christians in the name of Christianity.

In the early 17th century, a cadre of austerity-cloaked Christians who called themselves Puritans made their way to the so-called New World. The icy, grim ground they met upon arrival corresponded well with their vision of an authentic Christianity: one shorn of its Elizabethan frills and scrubbed of its insidious pagan stains. It was from this “pure” soil and purified Christianity that these individuals believed a model society would, and must, be born.

Their immaculate beacon would also be born from labor. Historians have noted that New England’s calendar was one of the most physically draining ever adopted, with colonists working practically every day save for Sabbath, Election Day, public thanksgivings and “days of humiliation.” In 1629, Massachusetts Bay colonists went so far as to make it official company policy that those who appeared to be “idle drones” would not be allowed to live among them.

Christmas, then, posed a problem to Puritanical society. As practiced in Elizabethan England, the day offered both idleness and indulgence, and to the Puritans a painful reminder of the moment that Roman Christians mixed blood with dirty pagan customs, thus marking Christianity’s fall into wanton decadence. Wrote George William Curtis in an 1883 Harper's, “Ritualistic decorations and delights, the pomp and splendor of holy-days…were not only [relics] of popery, but their retention was a sign of the fond cleaving of the Church of England to the hideous abominations of Rome.”

Christmas was not just an annoyance to ornery Puritan colonists; its celebration was a threat to discipline, an instrument needed to realize the colonists’ divine, purifying mission. Should the Puritan colonies succeed, Christmas and all it represented had to be buried.

And so it was. Before they officially banned Christmas in 1647, Puritans used labor to suppress the holiday’s observance. Shops were to remain open on Dec. 25, and on the first Christmas in Plymouth, colonists did not rest but began to build colonial settlements. Wrote one Plymouth colonist, “Munday [sic], the 25th day, we went on shore, some to fell tymber, some to saw, and some to carry, so no man rested at all that day.” He added that the closest the colonists came to commemorating Christmas was at the tail end of the day, when a master “caused us to [have] some Beere [sic].”

Outside Plymouth, the Massachusetts Bay Colony outlawed the holiday in 1659, punishing those caught celebrating Christmas with a fine. Colonists in Connecticut went so far as to prohibit the making of minced pies, dancing, playing cards and any instrument except — inexplicably — the drum, trumpet or Jew’s harp on Dec. 25.

The faithful held the holiday hostage until 1681, when laws banning Christmas were repealed. Over the decades, though, anti-Christmas attitudes had been woven into New England’s cultural fabric, and thus did not bend in accordance with the vacillations of the law. Well into the 19th century, Boston schools remained open on Dec. 25, and students who missed class to await the gifts of Santa — whom many Puritans believed to be both pope-like and, perhaps not so coincidentally, the Antichrist — were punished. The nearly 200-year Christian war on Christmas would only end after an 1870 federal intervention, when Ulysses S. Grant made the day a federal holiday in an attempt to unite the post-war North and South.

Nevertheless, Puritans were more or less successful in their mission of erecting a model society. Curtis noted that while we might see dour bigotry as one of colonists’ primary imports, we cannot forget the fact that they also planted “the greatest of free commonwealths” and established liberty’s centrality in both church and state — a liberty that, rightly or wrongly, many today invoke in their own culture wars.

But where Puritanical fears centered on how the holiday would affect labor and encourage excess, today’s Christmas crusaders situate the holiday around themes of consumption and fears of cultural erasure. In its annual “Naughty or Nice” list, for instance, the AFA rates a company’s apparent morality — and therefore deservedness of business — according to how often the word “Christmas” appears in its holiday advertisements. To receive a perfect score, an honor that no such business has received this year, a company must “promote and celebrate Christmas on an exceptional basis.” To be deemed “nice,” a business must use the term “Christmas” on a regular basis in its advertisements. “Naughty” companies such as Gap and Amazon fail to acknowledge the holiday, or use its name in just one form of marketing. Occasionally, AFA will select one company on its “Naughty” list to boycott from Thanksgiving to Christmas. Indeed, the very material excesses against which the Puritans railed in their centuries-long “War on Christmas” are those that today’s crusaders use to quantify their perceived persecution — and employ as weapons against their ostensible aggressors.

Vitagliano ends his November note by saying that “a good smear [by the “secular news media”] is quicker and cheaper than actually trying to understand us.” Likewise, it might behoove Vitagliano to try to understand the history of the “war” that he inherits. For better or worse, the “War on Christmas” that actually existed was waged in labor and law, and as a founding principle. Today, the supposed war assumes a more reactionary stance, apparently taking place in holiday ads, chain coffee shops and the salutations of supermarket cashiers. Quite frankly, that’s a pretty cheap take on faith, and Christianity’s materialism-decrying savior. Maybe the Puritans got something right, after all.