Bernie Sanders backers beware: It's up to you to keep movement alive if Hillary Clinton takes primary

Energized by campaign, the real question for Bernie Sanders supporters is what to do if Hillary Clinton wins 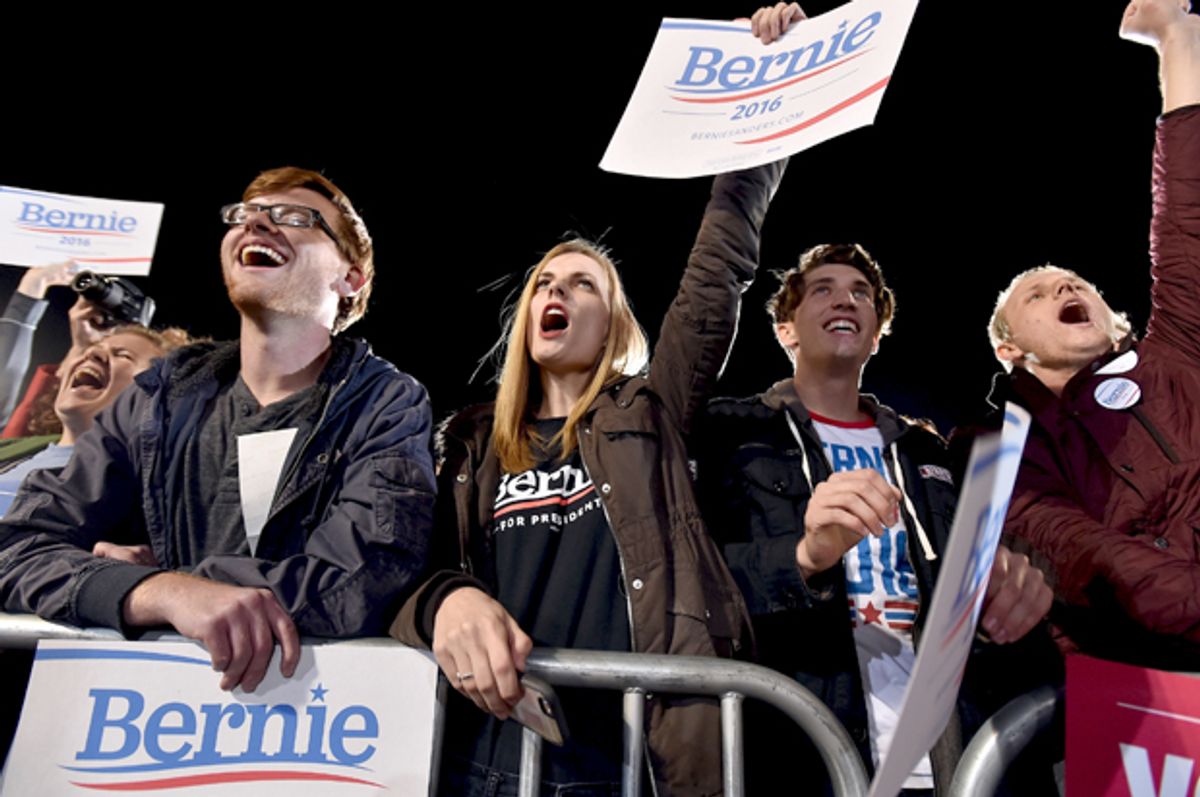 Ryan Cooper of The Week posted an interesting piece Tuesday morning about the dilemma facing Bernie Sanders’ supporters. It’s becoming increasingly obvious that Hillary Clinton will be the Democratic nominee, and there are several reasons why that’s so. Cooper writes:

“It’s been obvious from the start of the 2016 presidential race that just about the entire Democratic Party establishment is in the tank for Hillary Clinton. The head of the Democratic National Committee is one of her 2008 campaign co-chairs, and the DNC has refused to allow more than six debates, deliberately scheduled them at comically bad times to prevent Clinton challengers from getting much attention, and most recently cut off Bernie Sanders’ campaign from its own data.”

Cooper continues: “The DNC’s obvious bias is bad. It’s also utterly predictable. Clinton has deep ties to party elites thanks to her husband being a former president and her serving as secretary of state for the current president. It’s something less than shocking that the party’s elites are putting their thumbs on the scales against an avowed socialist primary competitor.”

Clinton is a competent candidate, and she could easily win the Democratic nomination without the overwhelming support of the establishment and the corporate sector, but that’s not really the point. What’s frustrating, particularly for Sanders supporters, is that the deck is so clearly stacked in her favor. Worse still, if Clinton does indeed win, the preferences of Sanders voters (roughly 10 to 15 percent of the overall population, as Cooper notes) will find little representation in government.

Clinton is the face of the Democratic establishment, and we know more or less what a Clinton presidency would look like. Campaign rhetoric aside, Clinton is a corporatist Democrat with a lengthy record of centrism and capitulation to Republicans, particularly in the realm of foreign policy.

Her most recent foreign policy speech at the Brookings Institution, for instance, was characteristically hawkish, and not what you’d hope to hear from a Democratic candidate for president. Her ISIS strategy is similarly maximalist, and mostly indistinguishable from the mainstream Republican position.

As I wrote last month, on both foreign policy and economic issues, Sanders offers a refreshingly sane alternative to the status quo, one that no other candidate represents. It’s a persistent failure of our two-party system that so many citizens, on both sides of the political spectrum, are practically disenfranchised by the two major parties, which differ more in rhetoric than in policy.

At any rate, the real question for Sanders supporters is what to do after Clinton wins, assuming that’s what happens. Cooper writes: “Whether the movement that Sanders is building has any staying power will depend on what happens after he all but assuredly loses the primary to Clinton. That’s when the real works begins. Sanders’ fans would be doing themselves an enormous disservice if they give up after the primaries are over.”

This is a crucial point: Sanders has energized a significant bloc of voters on the left, and if they retreat into the shadows after the presidential campaign, nothing will have been gained. Some Bernie supporters will surely stay home for the general election if Clinton is the nominee, and while that’s understandable, it would be a mistake in swing states, where votes really matter. And as uninspiring as it is, it’s nevertheless true that Clinton would be preferable to any of the GOP candidates.

There are tactical considerations beyond the presidential election, however, and that’s what Sanders supporters should focus on after this campaign. Republicans are consistently losing national elections, but they do very well in congressional elections and at various state-level offices. Gerrymandering has a lot to do with this, but the problem is also turnout. Conservatives, in general, vote more than liberals and progressives, and that has to change. Recognizing this, Cooper writes:

“Therefore, for Sanders’ supporters, I suggest that the overriding electoral priority ought to be to continue to participate in the political system. Demonstrate that there is a bloc of votes out there for social democracy; tactics come second. Vote for the left-most candidate in the primaries, vote for the Working Families Party, vote for some single-issue candidate, or even try and get yourself elected to something. If you feel like voting for a doomed protest candidate, or writing in Eugene Debs, or some other form of ‘throwing your vote away,’ go head, and don’t listen to any party hacks who try and bully you out of it.”

It’s hard to disagree with this. It’s critical that the voters animated by the Sanders campaign, many of whom were previously indifferent to the process, continue to participate beyond 2016.

Otherwise the Sanders movement will have been in vain.