Wall Street Journal takes aim at Ted Cruz, but this could be exactly what the self-proclaimed "outsider" wants 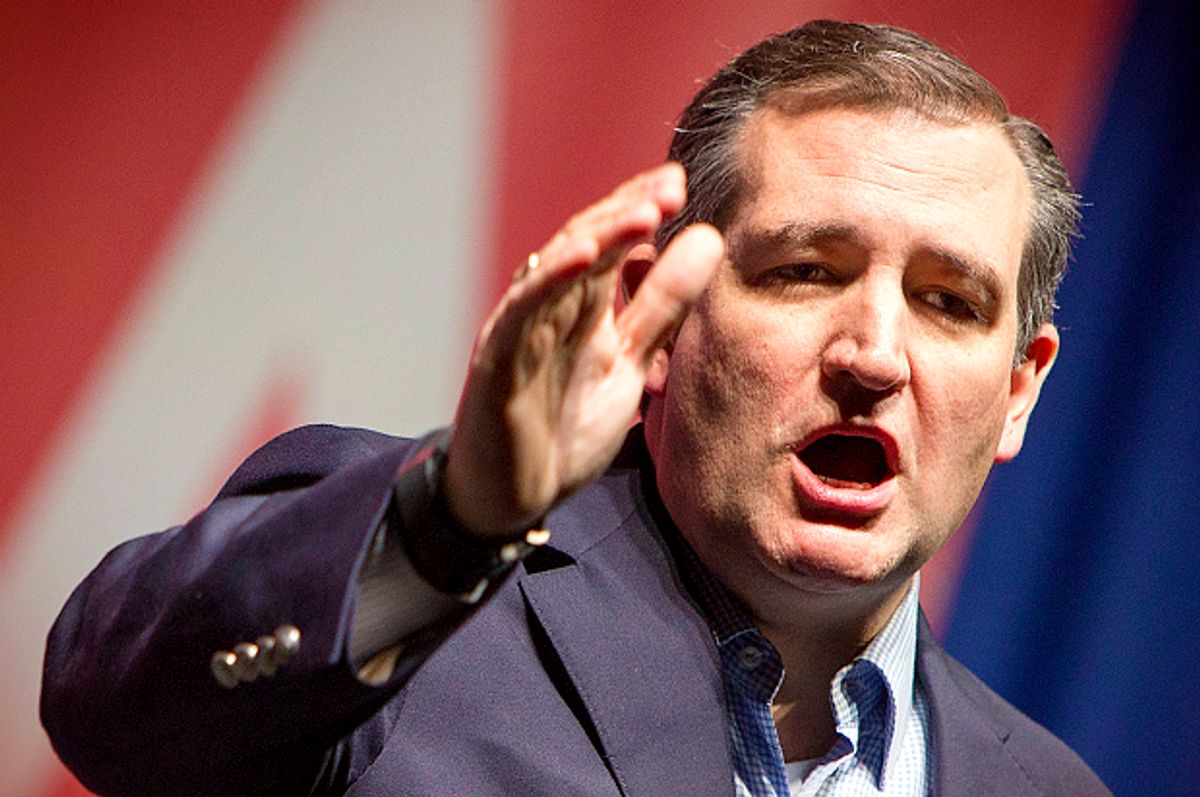 For decades, there's been a split within the Republican Party over what to prioritize: social issues or the economy? The establishment wing of the party cares more about interest rates than Planned Parenthood or the “religious freedom” of county clerks. They’re happy to court evangelical voters, but it’s a marriage of convenience – the ideological rift remains.

Social conservatives are animated by religious concerns – everything else is tangential. On most issues, they’re out of step with the country, but that has never mattered: For the committed, political martyrdom is preferable to compromise (or winning elections).

Religious conservatives have supported the Republican Party almost exclusively since the 1980s. But that support was always conditional: Eventually, the GOP had to deliver on some of the cultural issues, like same-sex marriage or abortion. So far they haven’t, and the conservative base knows it.

The GOP has embraced this segment of the party for practical reasons, and there’s no doubt that it helped them in the short-term. But the union is becoming more fractured by the day, as the religious right continues to lose the culture war. From abortion to drug law reform to contraception to gay marriage, Republicans have surrendered to majority opinion – and the cultural momentum now seems inexorable.

In this election, the right is clamoring for an “outsider,” if only to protest against an establishment that has taken them for granted. And this internal dissent has upended the Republican presidential race. Candidates like Donald Trump, Ben Carson and Ted Cruz owe much of their success to this resentment.

It appears the GOP’s intrafamilial squabble has spilled onto the editorial page of the Wall Street Journal.

As Politico reported, the Journal has turned its guns on Ted Cruz, the ascendant outsider candidate. Cruz is a talented demagogue; he knows his evangelical base and he’s made every effort to woo them. Although a sitting U.S. senator, Cruz has positioned himself as the anti-establishment candidate, someone who will force the “Washington cartel” to deliver the goods to religious conservatives. This was clear enough in September when Cruz vowed to shut down the government over funding for Planned Parenthood, a move he knew had no chance of succeeding.

The Journal has become increasingly critical of the Texas senator, and for very good reasons. It represents the establishment, and its editorial page studiously defends deregulation, supply side economics and interventionism, all of which are essential to mainstream Republicanism – they’ve never been particularly concerned with the culture wars.

Like the pro-business Republicans who read their Op-Eds, however, the WSJ editorial board knows the GOP can’t win a general election with Cruz at the top of the ticket. According to the latest polls, both Clinton and Sanders would easily defeat Cruz in a general election, and the gap is likely to widen as independents and moderates pay closer attention to Cruz’s shenanigans.

Republican insiders also know Cruz is a huckster. His brinksmanship in the Senate tells you everything you need to know about his seriousness as a legislator. Cruz is a creation of the conservative media-industrial complex, and as popular as he may be inside that bubble, he’s positively toxic outside of it.

The Journal insists its criticisms of Cruz are “rooted in nothing more than substantive policy differences,” particularly as it relates to immigration, trade and national security issues. “It’s not a personal thing,” said editorial page editor Paul Gigot, “It’s a business thing. It’s a professional thing. We call them as we see them.”

Naturally, the paper has been friendlier to Marco Rubio, who has become the default establishment candidate post-Jeb. This prompted Cruz to glibly suggest that “The Journal should change their header to the Marco Rubio for President Newspaper, because their attacks – and it’s going to keep coming because Marco fights for the principles they [emphasis mine] care about.”

“Listen, Joe, there are no conservatives in America who think ‘The Wall Street Journal’ is the voice of conservatism. As I talked about in my book, as you know, I wrote a book this summer called ‘A Time for Truth.’ The opening chapter talks about how the Washington cartel, the career politicians in both parties, who get in bed with the lobbyists and special interests, how they work, and the way Republican leadership punishes anyone who stands up to the cartel is they engage in public flagellation — as I describe in that opening chapter, ‘Mendacity,’ the most potent tool they have is ‘The Wall Street Journal’ editorial board. And anytime Republican leadership is mad at you -- with me, that's quite often — you can set a stop watch and within 72 hours, ‘The Journal’ hits you and they usually hit you twice.”

All of this plays perfectly into Cruz’s outsider narrative. If the conservative paper of record castigates him for being unconservative, well, that’s because they’re not real conservatives. The WSJ represents the very establishment against which the religious right is reacting, and so a denouncement by them is a badge of honor for Cruz.

As Matt Strawn, former chairman of the Iowa GOP, told Politico: “If the Journal’s opposition does anything with those voters [Tea Party and evangelical voters], it validates Cruz as an outsider not favored by the political and media elites. Does the WSJ editorial board have clout with many in the Republican Party? Of course. Does it have clout with the segment of Republican voters that Ted Cruz needs for success in the Iowa Caucuses? Not really.”

If anything, then, the Cruz-WSJ spat only exacerbates the internal conflict within the GOP. The establishment Republicans who read the Wall Street Journal and the people who support Cruz or Trump or Carson have very divergent concerns. This will become more and more apparent as the presidential contest heats up next year.