The attack on Youth Against Settlements: Why is Israel shutting down even nonviolent Palestinian youth activism?

The UN's stand on the harassment of young human rights defenders in the West Bank: "It should cease immediately" 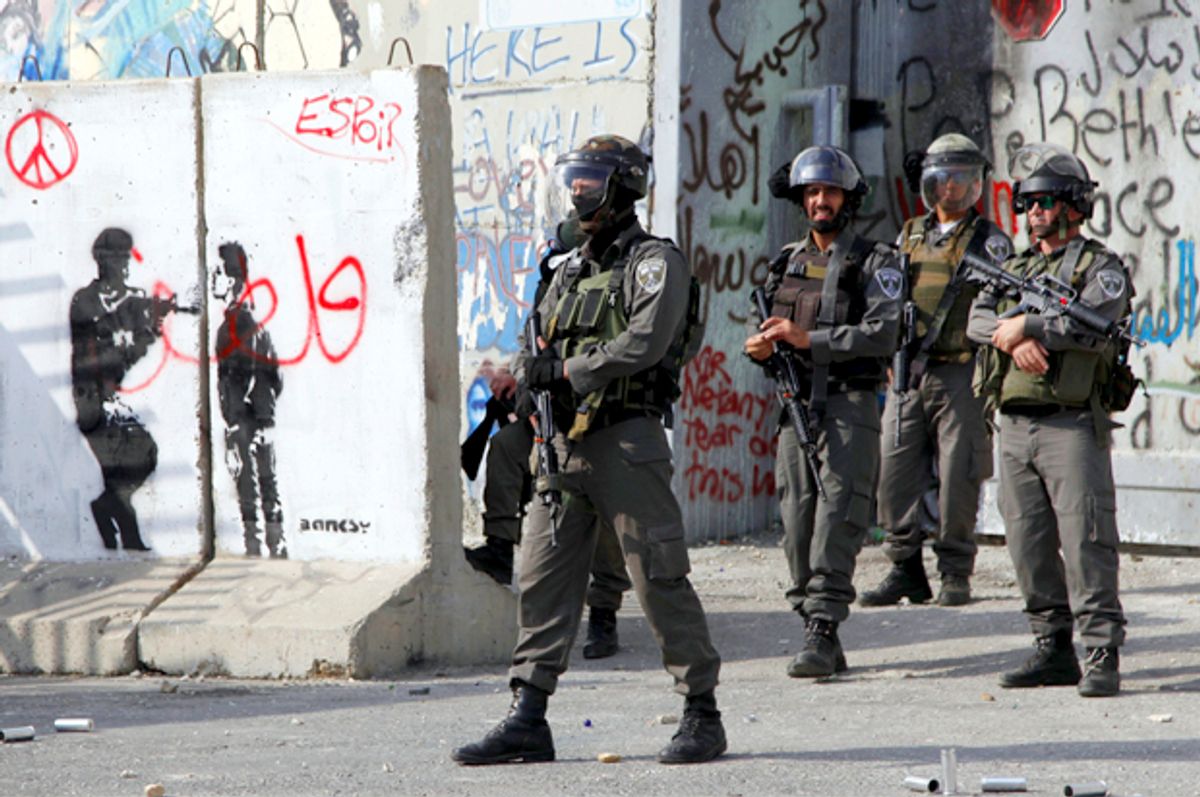 Israeli border policemen stand in front of the West Bank side of the check point between Jerusalem and Bethlehem during clashes with Palestinian demonstrators Friday, Oct. 2, 2015. (AP/Mahmoud Illean)
--

This week U.N. Secretary-General Ban Ki-moon said what advocates for Palestinian justice have been saying for months -- the recent violence coming from Palestinian young people is not due to some inbred streak of hatred, it is due to the all-encompassing brutality of the Occupation: “The anger we are witnessing is bred from nearly five decades of Israeli occupation. It is the result of fear, humiliation, frustration and mistrust. It has been fed by the wounds of decades of bloody conflict, which will take a long time to heal. Palestinian youth in particular are tired of broken promises and they see no light at the end of the tunnel.”

Indeed, what we see instead are further measures to tighten the grip of the Occupation. Israel plans to “build walls around Palestinians towns and villages on the pretext that it will stop stones being thrown at illegal Jewish settlers — ‘The army will build 9 metre high walls in the areas of Beit Ummar, Al-Arroub, Gush Etzion, and the areas surrounding Highway 60, south of the West Bank,’ claimed Channel 2 TV.” This comes in addition to the nearly 700 checkpoints in the West Bank that continually interrupt and disrupt the everyday lives of Palestinians. Clearly this is about more than stone throwing; it is about completing a project of total apartheid — segmenting the entire region into bantustans.

Another sign of Israel’s increased belligerence is the fact that it is now intensifying its persecution of even nonviolent forms of protest. Several months ago it began to harass a Hebron-based human rights organization called Youth Against Settlements; the leader of YAS is Issa Amro, one of the young Palestinians I interviewed previously for Salon. Besides raiding the homes of members of this group, Israel has prevented journalists, human rights activists, lawyers and others from access to the organization’s members and center, effectively sealing them off and at the same time leaving them open to physical attacks from settlers, many of whom have no compunction against using lethal violence, as seen clearly in the case of the murder by arson of a young Palestinian family, including an infant child, while they slept.

In the early morning on Saturday November 7, 2015, Israeli soldiers arrived at the YAS center, declared it a military outpost, and confiscated all keys to the center. Italian journalist, Francesca Borri, German activist, Lukas Wiehler, YAS coordinator, Issa Amro, and YAS activists, Ahmad Amro, Mohannad Azzeh, Ali Amro, and Zidane Sharabati were held hostage, their phones and computer confiscated and all connections to the outside world severed. The soldiers ransacked the center destroying of confiscating over $15,000 worth of cameras, video equipment, computers, memory cards, and more. “This action is because you are filming and spreading lies about Israel,” a soldier stated.

Outside, hundreds of illegal settlers, chanting “death to the Arabs,” gathered to celebrate the takeover of the house and attack activists from Hebron and Jerusalem who had come for support. The army fired excessive amounts of teargas and rubber bullets. Finally the soldiers left at 5 at AM the next morning.

On Dec. 18 the United Nations issued a report that “expressed grave concerns at continued reports that human rights defenders are being subjected to physical attacks, harassment, arrest and detention, and death threats … The continued harassment of human rights defenders in the OPT, who are exercising their rights to freedoms of expression and association, is simply unacceptable. It should cease immediately.”  The statement continues:

“We recently addressed concerns to the Israeli Government regarding retaliatory acts by Israeli authorities against members of one organisation based in Hebron, Youth Against Settlements, after its Centre was subjected to raids and settlers allegedly called for it to be closed,” noted the UN Special Rapporteur the situation of human rights in the OPT, Makarim Wibisono.

“The Centre has now effectively been shut down as a result of the Israeli military declaring the surrounding area a military zone,” Mr. Wibisono said. “We urge Israeli authorities to lift this military order.”

I was able to get through to Issa Amro this weekend, who told me that his group is now condemned to meeting outside the center, some 25 meters from it, in the fields.  He said simply,

The Israeli army is not defending Israel from terror, they are defending their occupation, illegal settlements and Apartheid.  They are targeting any human rights defender who tries to expose human rights violations, and extremist setters get whatever they want.

Closing our nonviolence center means they are targeting everyone who says no to the Occupation, even the non-violent defenders.  It is about using this opportunity to confiscate more Palestinian land, supporting the illegal settlements project in Palestine.

When I previously reported on the violence that sprang up in November, the world media deplored the horrible stabbings taking place in Israel-Palestine. This makes Israel’s attacks on Amro’s group even more puzzling.  Amro says, “We are recruiting Palestinian youth to non-violence -- closing our center means we can’t do that anymore.”

I also interviewed Ariel Gold, a staff member of CodePink and a coordinator for Jewish Voice for Peace. She was in the West Bank from Oct. 28 to Dec. 6 and Hebron from Nov. 14 to Dec. 6.  She noted the following:

The Israeli military seems to be in Hebron for the sole purpose of assisting the settlers in their illegal and violent activities. While I was staying at the Youth Against Settlements center, settlers decided to set up a 24-hour encampment at the entrance to the center. Israeli soldiers were present but rather than provide protection or remove the settlers, they joined the settlers in harassing the Palestinian, international, and Israeli activists. Egged on by their parents, and protected by Israeli soldiers, settlers' children even took part in the activities, attacking and chasing off Palestinian children from the soccer field. Following the encampment, the army declared the center a closed military zone for 24 hours.

During my time in Hebron I witnessed many attempts to prevent Palestinian and international activists from carrying nonviolent human rights work, including the arrest of 16-year-old activist Ahmad Azzeh on trumped-up charges. At one point I was even prevented from accompanying Youth Against Settlements on a tour of the old city's marketplace under the guise of declaring on the spot that no Jews were allowed. The soldiers could provide no documentation of this order, but insisted that I could not pass through into the marketplace with the rest of the group.

With the recent raids, attacks by settlers, arrests, and now the designation of the center as a closed military zone, I am deeply concerned about the safety of Youth Against Settlements activists like Issa Amro and 16-year-old Ahmad Azzeh. International bodies must immediately step in to protect groups like Youth Against Settlements so that they are able to continue working for equality and human rights for all people.

All this raises the question: Why is Israel trying to silence nonviolent Palestinian activists? And why is the U.S. government not speaking out against Israel’s persecution of peaceful human rights activists? At home, we see a disturbing parallel in the attempts to shut down another form of nonviolent protest: the Boycott, Divestment, and Sanctions movement.  Without a viable political will to end the Occupation, those who reject violence should actively protect nonviolent protests.