Yes, Chelsea Clinton can be a pro-choice mom: Anti-choicers blast the “abortion supporter” for being happy about her pregnancy 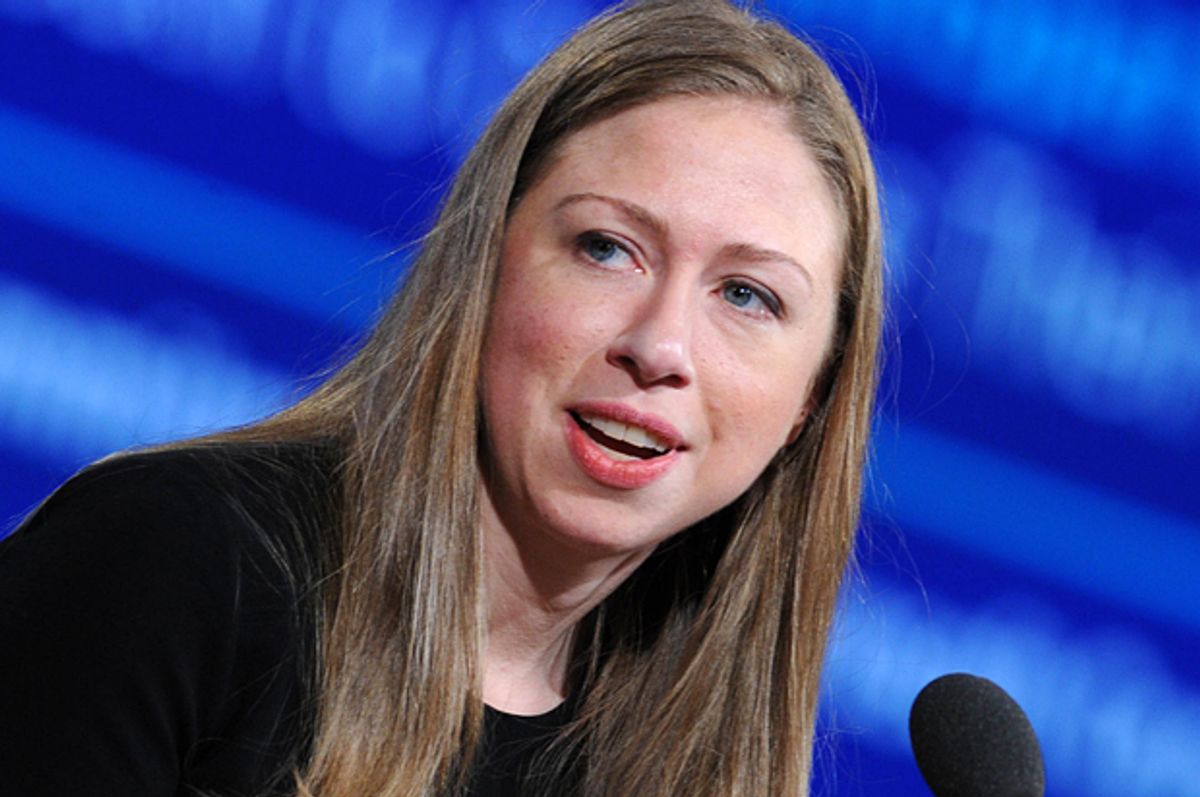 According to those who call themselves “pro-life,” not every wanted and welcomed pregnancy should be greeted with joy—certainly not if you’re Chelsea Clinton. The website LifeNews opened an article about Clinton’s Monday Twitter announcement that she’s expecting a second child with husband Marc Mezvinsky with this sentence: “Abortion supporter Chelsea Clinton announced Monday that she’s pregnant — not with a fetus or clump of cells but with a ‘child.’”

It shouldn’t need saying, but since it clearly does: moms and mothers-to-be can be pro-choice. Many, many are. There are Facebook groups for pro-choice parents, and a Pregnant, Parenting, and Pro-Choice Tumblr. But in the anti-choice mindset, being pro-choice and wanting a child cannot coexist, even though, according to The Guttmacher Institute, “Six in 10 American women having an abortion already have a child, and more than three in 10 already have two or more children.” One antiabortion advocate even asked NARAL Pro-Choice America President Ilyse Hogue “Is that real?” when Hogue attended a hearing on Capitol Hill, visibly pregnant (with twins). Hogue told The Washington Post, “[M]y personal experience and my gratitude and relief in choosing to become a mother and being supported in that just makes me feel so much more strongly that other people should have the same support.”

Anti-choice activists expect women to know in advance exactly how they will deal with a pregnancy, based on their politics, and can’t grasp that a wanted, welcomed pregnancy will likely feel completely different for a woman like Chelsea Clinton than an unwanted one. Reactions on Twitter implied that Clinton and her parents, Bill and Hillary Clinton, shouldn’t be excited about this pregnancy because they are also in favor of abortion rights.

On LifeNews’ Facebook page, Chelsea Clinton faced further criticism premised on the same false dichotomy, such as: “Interesting when a child is wanted, it's a child, but not when unwanted. How convenient” and “Good thing she is an adult. If she wasn't her mother Hillary might take her to a Planned Parenthood and force her to get an abortion at anytime up to the time the baby would be born. May God bless this innocent child. It will need it in that family where the grandmother sees nothing wrong with and promotes the slaughter of the unborn.”

The anti-choice faction’s ludicrous conflation of being pro-choice with being pro-abortion only gets highlighted when pro-choice women activate their right to choose their fate by carrying forth their pregnancies. There are countless personal essays detailing how becoming a mother made women more adamantly pro-choice, not less. After recounting the “animalistic need to protect this little thing inside of me” Jamie Kenney felt during her pregnancy, she goes on to detail at millennial mom site Romper why being pregnant made her “even more pro-choice.” Kenney writes, “When I thought about the idea of women and girls being forced to be pregnant against their will, especially those who had been forced into pregnancy through rape, I felt my heart break and then rebuild itself through righteous fury. No woman or girl should have to go through pregnancy against her will. It’s weird and difficult enough when you choose to do it. It seems literally torturous to imagine enduring it if you didn’t.”

Exactly. Those who favor women being able to make the best decisions for their own lives when it comes to their reproductive rights are not “for” abortion; we are for women’s health—physical, mental and emotional. We are for allowing women and girls the autonomy to know what’s best for themselves, rather than assuming that a government or partner or parent or society can make that deeply personal decision for them.

Women who are already mothers are in a unique position to know just how much of a toll parenthood can take on their lives. One mother, Shantae, told Cosmopolitan about the decision making process she faced when she had an abortion when faced with an unexpected pregnancy while she was still breastfeeding her 4-month-old and parenting a 3-and-a-half-year-old. She said, “When mothers are thinking about terminating a pregnancy, it is often out of love and consideration of how your family is functioning at that moment, and trying to figure out, 'Can I financially afford this baby? Can I emotionally afford another child and all the things it might bring up in my current relationship? Is it fair to the children I currently have if I'm not able to provide all the things that I would like to for them — the basics, like childcare?'” Need further proof that mothers who have abortions aren’t “pro-abortion?” Shantae went on to have two more biological children and two stepchildren.

Yet the idea that women should somehow be swayed away from being pro-choice because of the “blessing” of new life won’t go away. Last year, when Chelsea Clinton announced that she would become a mother for the first time, Sarah Palin suggested that becoming a grandmother might be enough to turn Hillary Clinton away from being pro-choice because of parents and grandparents “realize that sanctity of life, how innocent, how precious it is.”

There’s nothing contradictory about being a pro-choice mother, grandmother or woman trying to get pregnant. Trusting those who may get pregnant with making their own health care decisions means embracing a world where more families can make announcements about expanding their families, on their own terms, like Chelsea Clinton did. Suggesting otherwise is as ludicrous as questioning the timing of the pregnancy announcement.