Beyond “Transparent,” “Mad Men” and “Master Of None," here are the episodes that surprised and delighted 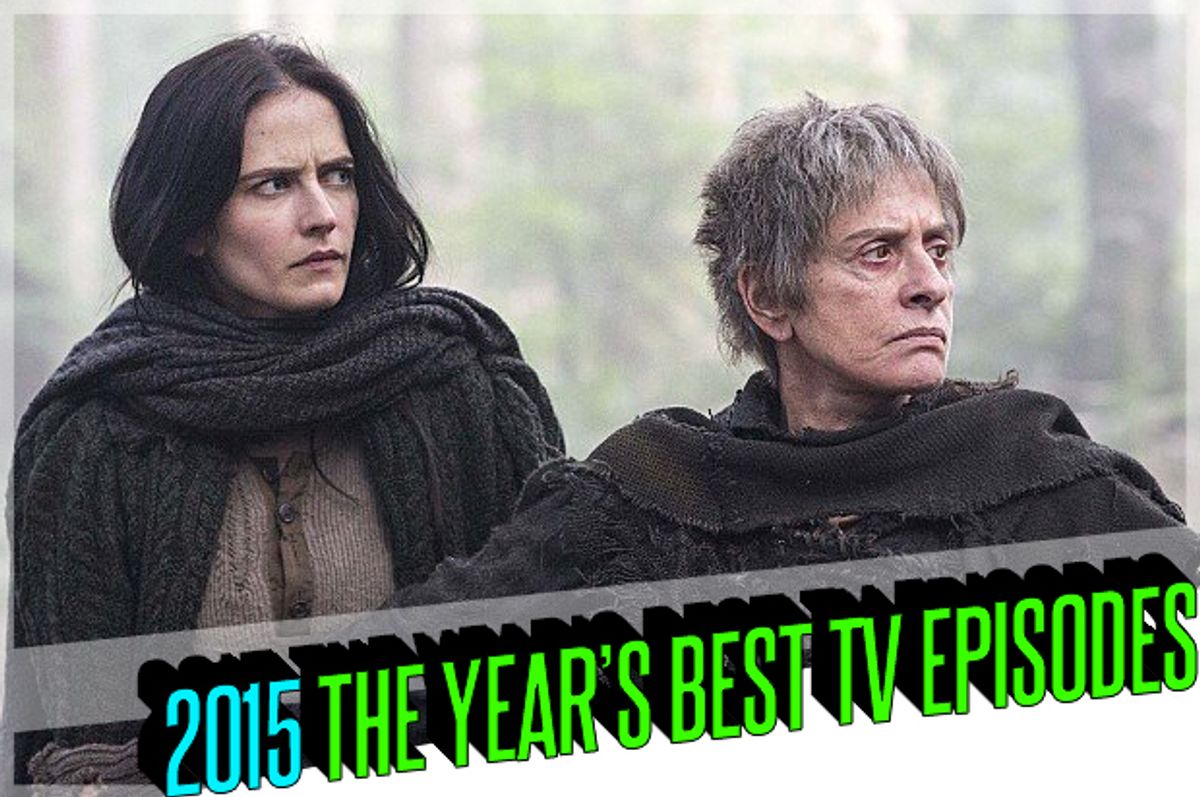 I write about a lot of television, but there’s a ton more out there I barely get a chance to talk about. This year, I’ve called out some amazing installments of television—from “Inside Amy Schumer’s" “12 Angry Men Inside Amy Schumer” to “Black-ish’s" sublime “The Word.” But for every “Parents” or “Bobby’s Place” I can spend some time on, there are a dozen more—standout episodes in middle-of-the-road shows, or reliably fantastic installments from shows that are doing their great thing well on into their 10th season. I picked five of those episodes that I hadn’t written about yet, so that 2015 doesn’t go by without my acknowledging their brilliance.

I’ve got a soft spot for the earlier episode “Chickens,” which introduces a lot of the insane, surreal gut-punches that are the hallmark of the second season of the animated Netflix series “BoJack Horseman.” But “Let’s Find Out”—which is an abbreviated title of the game show within the show, conservatively titled “Hollywoo Stars: What Do They Know? Do They Know Things? Let’s Find Out!”—is a near-perfectly structured episode, following BoJack’s decision to be on his frenemy Mr. Peanutbutter’s new game show. The friends/rivals/mutually jealous colleagues are joined, for no reason whatsoever, by Daniel Radcliffe (as himself), who is competing with BoJack for the prize money. As is always the case with “BoJack Horseman,” the episode skewers “Hollywoo” (the D fell last season, so we just call it “Hollywoo” now) and celebrity—and what’s underneath it, which is human frailty and fractured intimacy. Things get bad pretty fast—but in a way that is incredibly satisfying, with layer upon layer of sight gags, game-show puns, and mis-identifications of Daniel Radcliffe.

For a show that is about to debut its 11th season, “It’s Always Sunny in Philadelphia” has managed to stay incredibly fresh, smart and interesting. “Charlie Work” is perhaps one of the show’s best episodes, purely because of its ambition—the 22-minute episode features a back half that is shot in one long take (with a little bit of understandable strategic fading out and in) about Charlie (Charlie Day) trying to get the bar to pass its yearly health inspection. It’s a delicate, ridiculous dance, especially because the rest of the gang decides to steal a truckload of frozen steaks and move some live chickens around during the process. To add hilarious insult to hilarious injury, the rest of the gang—in trademark self-absorbed fashion—have no idea why Charlie is running around like a maniac.

This ABC comic-book show—the first TV show in the Marvel Cinematic Universe—has had its ups and downs, but finds a sweet spot with “4,722 Hours,” a slice-of-life episode where Simmons (Elizabeth Henstridge) gets marooned in a wasteland and can’t find her way home. The season up until then has showed us the journey of her former team, trying to find a way to get her back—headed by Fitz (Iain De Caestecker), her best friend, romantic interest and other half. (The rest of the team refers to them collectively as “FitzSimmons.”) Fitz finally manages to get Simmons back—a time-and-space portal is required, you know, comics. In “4,722 Hours,” we learn about what happened to Simmons, from the first minutes of her desertion to the hours, days and weeks that follow, as she has to learn how to find water, forage for food, and avoid both sandstorms and predators. It’s a miniature “127 Hours” or “Castaway,” except fueled by Simmons’ faith in Fitz and the long silence of desolation. For a show that often includes moments of darkness but doesn’t quite know how to frame them, “4,722 Hours” is a coup.

This episode of “Penny Dreadful,” Showtime’s Gothic drama, is a flashback starring Broadway legend Patti LuPone as Joan Clayton, the “cut wife” that mentored protagonist Vanessa Ives (Eva Green) when she first came into her supernatural powers. “Mentor,” I suppose, is a strong word—Joan sets Vanessa to menial tasks and subjects her to occasional cross yelling, but it’s part of the extremely recognizable training of the untrained talented youth into the somewhat-trained hero. Joan lives in a rickety cottage on a desolate moor that might as well be out of Hansel & Gretel; her treatment of Vanessa is somewhere in between Mr. Miyagi and “The Sorcerer’s Apprentice.” As with so much of this show, it’s both intensely familiar and uniquely riveting. Plus, “Penny Dreadful” has a way of digging into the Victorian era’s magic and social order at the same time, and it does so with Joan, who, as the town’s resident odd woman, is both heavily relied upon and incredibly despised. Amid the story’s anxieties about the bad witches who are coming for Joan and Vanessa both is a story about trying to forge an independent life as women in a world that not only hates women, but hates those who take care of women—in this case, abortionists, the cut-wife’s most sought-after occupation. A set of predictably bad things happen—this being an origin story in flashback, it definitively has a sad ending—but in addition to capping a fantastic episode, LuPone’s presence was so wonderful that she is returning as a regular for season three. The more of this, the better.

“Veep” is a reliably brilliant show at all times, but the Season 4 finale was a particularly sardonic feat of political comedy, one that used arcane knowledge of the Electoral College and a spread of red and blue states that are probably well outside the realm of fivethirtyeight’s probability spread, to create a situation where Selina Meyer (Julia Louis-Dreyfus) is wrested from her seat in the Oval Office by a ridiculous technicality. As far as reset buttons go, it’s the prettiest, shiniest, most ornate one on the market; given that it adds Hugh Laurie to the cast as Selina’s too-charming ouster, it’s a rather welcome one, too. Showrunner Armando Iannuci and star Louis-Dreyfus are perfectly matched to each other, in terms of how much knowing irony, bitter humor and dry cynicism they bring to the table. Adding in the show’s broad commentary on American politics (a phenomenon not mocked enough, in my opinion) with a talking-heads segment featuring a Nate Silver stand-in getting trounced by the events of the day is just a lovely bonus.