We are all sick of Elf on the Shelf: For next year, here are 6 surveillance alternatives to keep your kids in line

You've heard of Mensch on a Bench, but that also sounds like a lot of work—try these low-impact options instead 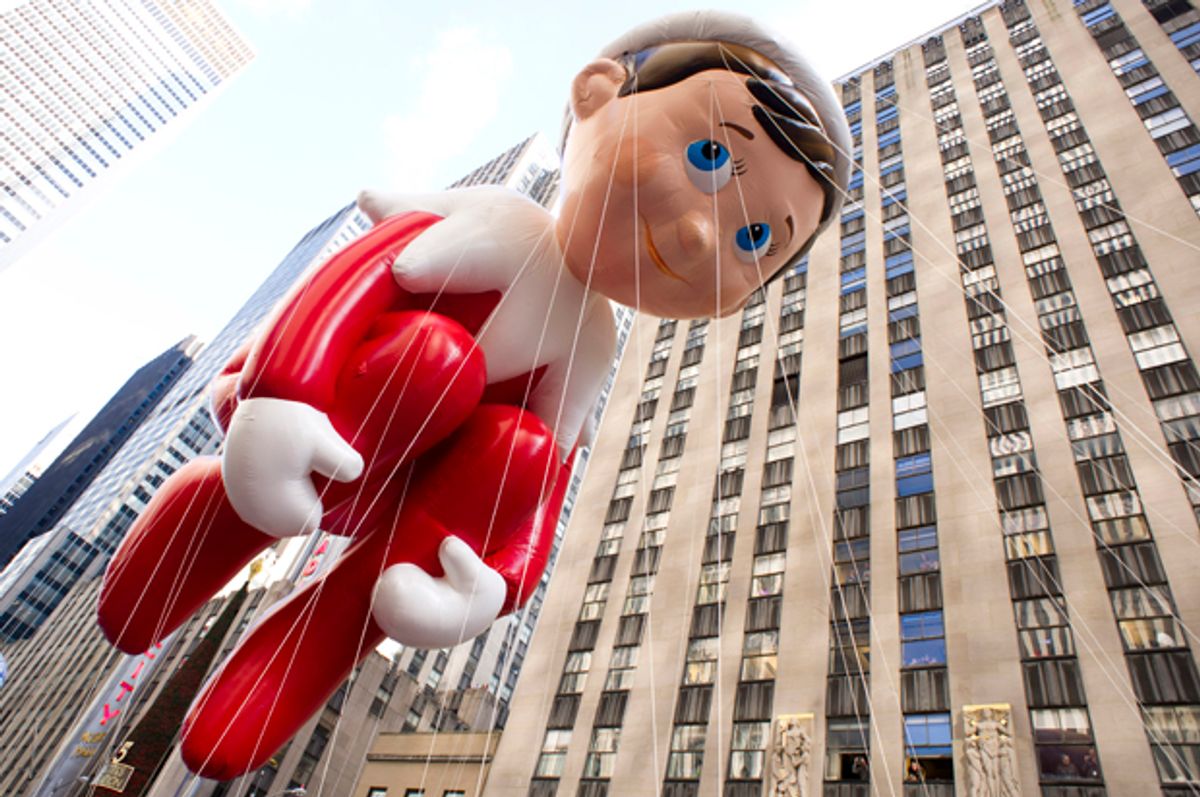 The Elf On The Shelf holiday tradition has grown in popularity since the children’s book was originally published in 2005. For the uninitiated – meaning people without young kids – the Elf On The Shelf is a stuffed toy that shows up after Thanksgiving and acts as Santa’s watchdog, observing the naughty and nice over the course of the holidays. Each household elf uses Christmas magic to fly back to the North Pole and report to Santa every night.

Since the age-old threat of “Santa’s always watching” is meaningless to the sophisticated, app-designing child of the 21st century, we parents perch this slightly creepy, apple-cheeked elf in a new place night after night as an extra layer of accountability to keep the little tyrants in line. And "better watch out" indeed — earlier this week a 7-year-old in New Jersey called 911 in a panic after she "accidentally" knocked hers over.

Retailing for $29.95, you get the toy and the book in a keepsake box. But many families aren’t able to justify squeezing the extra cost into their holiday budgets — not to mention the time investment. And since the Elf On The Shelf is a Christmas-themed intimidation device, what are the non-Christians to do?  The following is a list of 6 alternatives designed to meet every family’s needs.

1. Mensch on a Bench

In 2013, the Jewish community answered with a storybook-and-stuffed-toy of its own. Unlike the Elf On The Shelf, the Mensch On A Bench was created for more educational purposes, teaching the story of Moshe the Mensch while also adding a little more “Funukkah” to Hanukkah. And like the Elf On A Shelf, there are rules meant not to be broken, and many families use their Mensch to motivate good behavior out of their little ankle biters. (Mensch On A Bench from Amazon, $25.95)

Christianity and Judaism are not the only religions that celebrate winter holidays. For everyone else, the Troll In A Bowl is a fun and affordable homemade option.  You can find those fuzzy haired troll dolls pretty much anywhere. And they come in all sorts of colors – purple, pink, blue, green – to help promote diversity. Get yourself a troll, grab a cereal bowl out of the cabinet, and voila:  Troll In A Bowl!  This is also good for the atheists, because you can just make up your own story to further dangle the idea of not getting presents over your greedy children’s heads. Or take it a step farther and invent your own religion? The possibilities are endless. (Troll Doll from Toys R Us, $5.95; Fargrik Cereal Bowl from Ikea, $1.95)

3. Wreath on the Door

If money’s tight, but you want something similar to the Elf On The Shelf, why not double down on tradition and adapt your front door wreath?  This non-denominational option works just like the Elf On The Shelf, Mensch On A Bench, and Troll In A Bowl, but you don’t have the stress of finding a new place to move it every night.  Magically, it travels to the North Pole or ancient Israel or the Mystic Forests of The All and returns to the exact same spot on your front door the next morning. Your children wake up dazzled and will behave for weeks. (Fresh Wreath from Harry & David, $59.99; Artificial Wreath from Home Depot $9.99)

White as snow, magically shape-shifting, affordable, practical — the Toilet Paper On A Toilet Paper Roller offers everything the Elf On The Shelf offers, but unlike the elf your children are encouraged to touch it, thus boosting its holiday magic.  Watch their eyes grow amazed as the majestic holiday toilet paper is flushed down, swirling round and round into the sewage pipes, through the city wastewater treatment plant, and all the way to the North Pole. The edges of every new roll can be decorated with appropriately colored Sharpies to match the spirit of whatever holiday was invented to force you to buy presents for your kids. (Charmin Ultra Strong Toilet Paper, 2-Ply, 24 Double Rolls Per Pack from Safeway, $11.99)

5. Dad's Winter Coat on a Hook

Consider using the old man’s coat as a way to keep the little brats in line. Dad’s working 60 hours a week. He’s grinding away every day to pay the mortgage, put food on the table, and now he’s gotta foot the bill for a stinkin’ Barbie Dreamhouse?  What’s he getting out of this? Why not reward him by letting him out of the house every night? Like your standard shelf elf, Dad’s Winter Coat On A Hook whisks off to mysterious places, like, say, Dad’s weekly poker game down the block. When it comes back reeking of cigar smoke, just blame it on Santa’s pipe. (Hooded 3-Pocket Parka from Burlington Coat Factory, $59.99)

6. Serial Killer in the Closet

One of the more exciting ideas behind the Elf On The Shelf is the thrill of finding that cute little tramp in a new spot every morning. If it’s the thrill you’re after, how about a real thrill? With the right costume and a little bit of preparation, you’ll have the pleasure of scaring the life out of your kids throughout the entire holiday season. Who will enjoy it more, the parents or the children? All of that anticipation during the holiday season will pay off in dividends when the trauma finally subsides. Gift your kids the memories of a lifetime! (Jason Voorhees Mask from eBay, used, $6.50; WÜSTHOF 8” Cook’s Knife, $129.99)