We live in the golden age of awful news: Why every year seems so horrible in retrospect 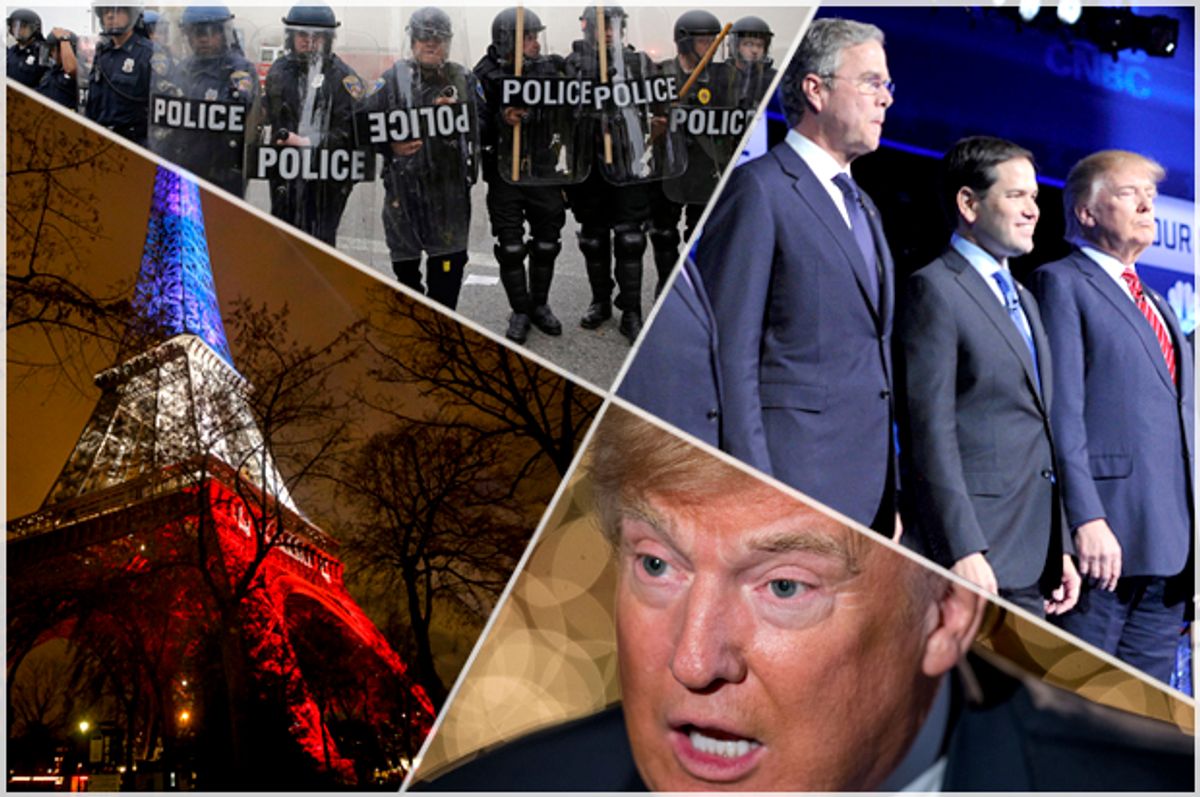 2015 had the same number of days as any other year, but lately it seems like the world is speeding up much faster than we can handle.

Technology has allowed us to record and experience so much more than anyone ever has that it's become easy to feel like we are almost drowning in news events. The modern media cycle strips the flesh off of even the most minor occurrences with hyena-like intensity. I can’t recall how many times I’ve thought, “That happened just this year?” The churn is so great that it’s sometimes hard to remember.

Horrors come with dizzying frequency. 2014 was routinely described as a “terrible year,” but every year feels terrible now. 2015 has been dire enough that Slate felt compelled to make a list of nice things that happened over the past 12 months, as if to remind us that there were pleasures to be found among the misery.

All of this might have something to do with why I keep returning to the idea of our place in history. I find myself wondering, over and over again, how this particular moment in the world will be remembered, 50 or 100 years from now (assuming, of course, that our species is still around at that point). It’s always impossible to really step outside the precise time you are living in, but we are so overloaded these days that I’ve noticed a certain comfort in making that attempt. The past 50 years were rotten in many ways, but they were also beautiful. We remember both of those things now.

History has assigned overarching titles to huge chunks of time—the Middle Ages, the Industrial Revolution, the Enlightenment—but we don’t live time in eras. We live it in days. What will they call this collection of days? How much of what we are experiencing right now will wind up mattering? When we're able to emerge from the wreckage and look back, what will seem important?

It does feel like we are going through a particularly wrenching bout of transformation. Its source is not difficult to discern. The Internet is bringing about a change as massive as anything we’ve seen in centuries, and we are living right in the middle of that change. Everything, from our jobs to our brains, is being rewired. We are in the midst of shedding one world and introducing another. It is thrilling and terrifying and uncertain. Everywhere, the vast territory opened up by this massive shift in our lives is being fiercely contested.

Like any revolution, it is provoking cycles of progress and backlash at record speed. The Internet is driving incredible, inspiring civil rights movements, but we’re also dealing with Donald Trump. It’s pushed discourse around feminism and queer issues to places it would have been astonishing to imagine even 10 years ago, but there’s also an all-out war on women’s reproductive rights taking place at the same time. It’s made us more connected to each other, more able to share joy and sadness and solidarity from across borders than ever before, but we’re also more spied on, more tracked, more collected than we’ve ever been.

This unsettling leap into the future is accompanied, naturally, by the lingering effects of the past. The colonial adventurism of the West over the last 100 years has helped turn the Middle East into some unholy fusion of World War I and World War II-era Europe, with decaying empires, horribly knotty rivalries and genocidal monstrosity all combining to form a bloody and intractable mess. (And that’s before you even get to the Israel-Palestine situation.) The global acceleration of fossil-fuel consumption is killing the planet at a torrid pace—yet we seem unable to address the issue with a commensurate sense of urgency. Meanwhile, the 300 million guns lying around the United States are being put to use, to horrifying ends. And the entrenchment of neoliberal capitalism is colliding fitfully with resurgent social movements.

Perhaps I have been thinking so much about the historical legacy of this period in time because it is the only way to even attempt to sift through such a morass. I really want to know what’s going to happen next—what will turn out to have mattered most, what battles were won. I’d imagine, for instance, that our half-hearted measures to tackle climate change will loom much larger in the historical retelling of our era than many other things that seem terribly central to us now. I’d imagine that the angst around “p.c. culture” and college students who have the audacity to question the prevailing order, no matter how chaotically, will come to be seen as a harbinger of the demographic shifts in American society, and not as a threat to the First Amendment. I’d imagine that Ted Cruz will be mostly forgotten.

Eventually, we will come out on the other side of some of these things. A lot of that depends on what people do, of course. Living through a revolution is incredibly jarring, but it is also thrilling in its way. There is a chance we will tip even further into the muck, but there is also a chance that things change for the better. 2016 will be just as awful as 2015, but there will come a point when we are able to see it with some measure of clarity. I’m hoping I’ll be around long enough to get to that point.