Donald Trump wasn't the only awful thing this year: The 6 worst moments in U.S. politics of 2015

Hillary's servers, Carson's pyramids and Donald Trump's ... everything — just some of the lowlights of a bad year 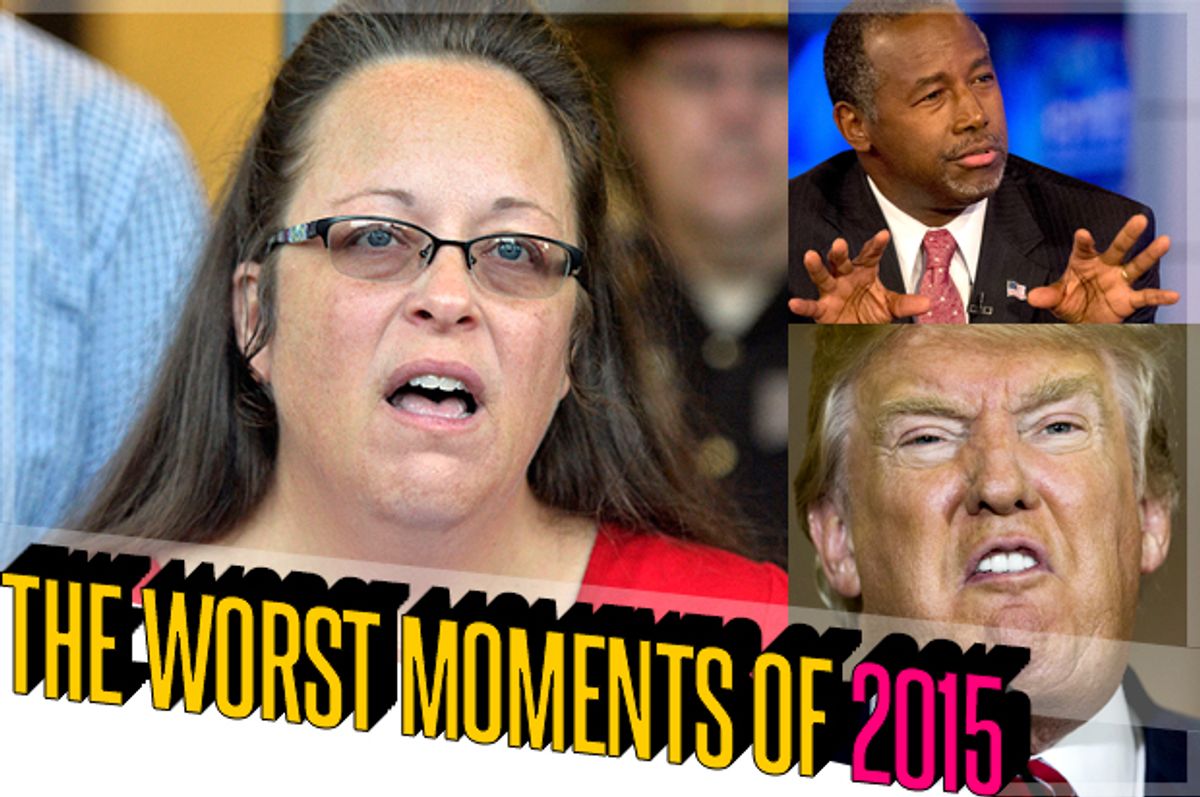 Before we get this listicle started, let's get something out of the way first: That headline is not intended to be taken literally. We are not so callous or shallow to think that anything could be "worse" than what happened in Charleston this summer, or Colorado Springs this fall. Those were two atrocities, yes; but they were profoundly political acts, too. They resulted in the murder of innocent people; human beings who loved and were loved, and will never come back. Nothing could be worse.

So this list is, like all listicles, a contrivance. Here, "worst" can be seen as an equivalent to "most annoying" or "most aggravating" or "most please for the love of God can I go on Facebook for just five minutes without seeing this crap?" With that said, please enjoy this quick-and-dirty recap of some of the worst moments in what was — for American politics, at least — an extremely no good year. The case, which was spearheaded by anti-Obamacare absolutists within the Republican Party and the libertarian movement, was laughable on its face. Its proponents argued that because a single line in the bill, ripped from context, suggested that it was possible that the Affordable Care Act (ACA) intended to deny subsidies to those who lived in states that did not set up their own exchanges, the subsidies making health insurance affordable for millions of Americans in Republican-run states were unconstitutional. As many noted at the time, to accept the argument, one essentially had to believe that the then-Democratic Congress of 2009-2010 purposefully hid a time-bomb within the ACA.

Reason ultimately prevailed, with the majority of the Court siding with the government because, as Chief Justice John Roberts put it, the law was clearly intended "to improve health insurance markets, not to destroy them." Still, the fact that we even got to this point was deeply troubling for those who, against mounting evidence, would like to think the Justices of the Court are more than politicians in robes. While I'm no longer inclined to see the scandal around former Secretary of State Hillary Clinton's private email server as a total non-issue (hat tip to Jason Leopold for changing my mind on that one), the idea that a story so arcane, technical and far removed from Election Day could matter in 2016 was always ridiculous.

As is almost always the case when it comes to Clinton, it brought out the absolute worst neuroses and instincts of the mainstream campaign press. The likelihood of finding a "smoking gun" (an email from Clinton with the subject line: "I did Benghazi, and it was good. LOL!" perhaps?) was always infinitesimally small. Clinton isn't that stupid, for one thing; and even if we hypothetically grant that she is corrupt, that's not how corruption works. Not in 2015, and not when it comes to someone so firmly enmeshed in the global elite.

Yet because the press was bored, scandal-thirsty, and desperate to ensure the Democratic primary wasn't a total snooze, we spent I-don't-even-want-to-know how much time talking about Clinton's emails, her servers, her "home brew." There was a reason, in other words, that Sen. Bernie Sanders' quip about the issue during an October debate went viral. As far as stale leftovers of the culture war go, the story of religious fanatic and Kentucky County Clerk Kim Davis, whose refusal to grant marriage licenses to same-sex couples made her a global story, is better than most. I'd certainly be more willing to relive Davis' histrionics (and Mike Huckabee's opportunism) than those of Cliven Bundy (and Sean Hannity). But, really, that's not saying much.

What made the Davis story such a drag, though, wasn't just her bigotry and the Christian right's eagerness to defend it. No, what made the Kim Davis story such a drag was the way it confirmed that, despite the Supreme Court's recognition of a right to marry, the culture war would endure for quite some time. Not in some separate form, mind you, but rather almost exactly as it was throughout the '80s, '90s and '00s: with huckster zealots like Ralph Reed on one side, self-satisfied elitists like Bill Maher on the other, and with no new arguments, and no new perspectives. Just lots and lots of yelling. Dr. Ben Carson is a fascinating person. His is a genuine rags-to-riches story, for one thing. And because such stories are both 1) incredibly, unfathomably rare, and 2) inestimably important to America's self-mythology, they're always worth a close examination. Are there any lessons to be drawn from Carson's experience, beyond the usual Protestant work ethic pablum? Did his earlier experiences of crushing poverty make it necessary for him to close off the part of himself where empathy would usual reside?

Or go ahead and skip all that coming-of-age stuff and go straight to his pioneering work as a neurosurgeon. Some of Carson's most celebrated achievements raised profound and irresolvable ethical questions, for example. Questions that touch on many of life's most painful and unavoidable realities; questions concerning death, God, individual autonomy, the pursuit of glory, the true nature of what it means to be "alive," etc.

Hell, you can go ahead and skip that, too. Just dive into Carson's politicization and radicalization, both of which may have been far more recently come to than Carson lets on. Or how about the relationship between his years spent on the inspirational speaker circuit and the skills necessary to run for president in today's Republican Party? What about the fact that Carson's spent almost as much money raising more money as he has on anything else? Is this a new kind of political campaign?

All of these areas of inquiry were off the top of my head. All would have been worth the media's time and attention. The media spent an enormous amount of time and energy making fun of Carson's views on ancient pyramids instead. Although I've got nothing especially against Vice President Joe Biden and don't think he would be an appreciably worse president than any other mainstream Democrat, I still consider his (belated, tediously drawn-out) decision not to run for president to be the best thing he's done in quite some time.

Why? Because his campaign simply never made sense. Biden was never going to be the left-wing challenger to Clinton — Sanders' bona fides in that regard towered over his — and on most major policy issues, he was either the same (or worse) than the former secretary of state. His record on criminal justice is not-so-good; his record when it comes to holding the financial industry to account is not-so-good; and his record on reproductive health is not-so-good, either.

Maybe that's part of the reason why Biden's biggest fans weren't found among the rank-and-file of the Democratic Party, most of whom like him but saw no need for him to take on Clinton, but among the elite D.C. media he'd spent decades schmoozing. To be fair, some of his old Republican buddies from his days in the Senate were enthusiastic about the idea, too.

And if you think Hillary Clinton's gender — aka "likability" — wasn't a major force behind the whole circus, I've got some primo beachfront property in Iowa to sell you. I have written so much about Donald Trump over the past six months that the prospect of repeating myself fills me with a cold, gnawing dread. So let's just say that while Trump has provided some moments of gonzo humor, as well as some decent schoolyard insults, his net effect on the GOP primary, and U.S. politics in general, has been overwhelmingly for the worse. What's most upsetting about Trump, however, isn't that he may be president (still a long-shot). It's that somewhere out there is the next Trump, watching and learning from "the Donald's" mistakes.