2015's biggest moments in sex and gender, from Caitlyn Jenner to Ashley Madison and "50 Shades" on screen 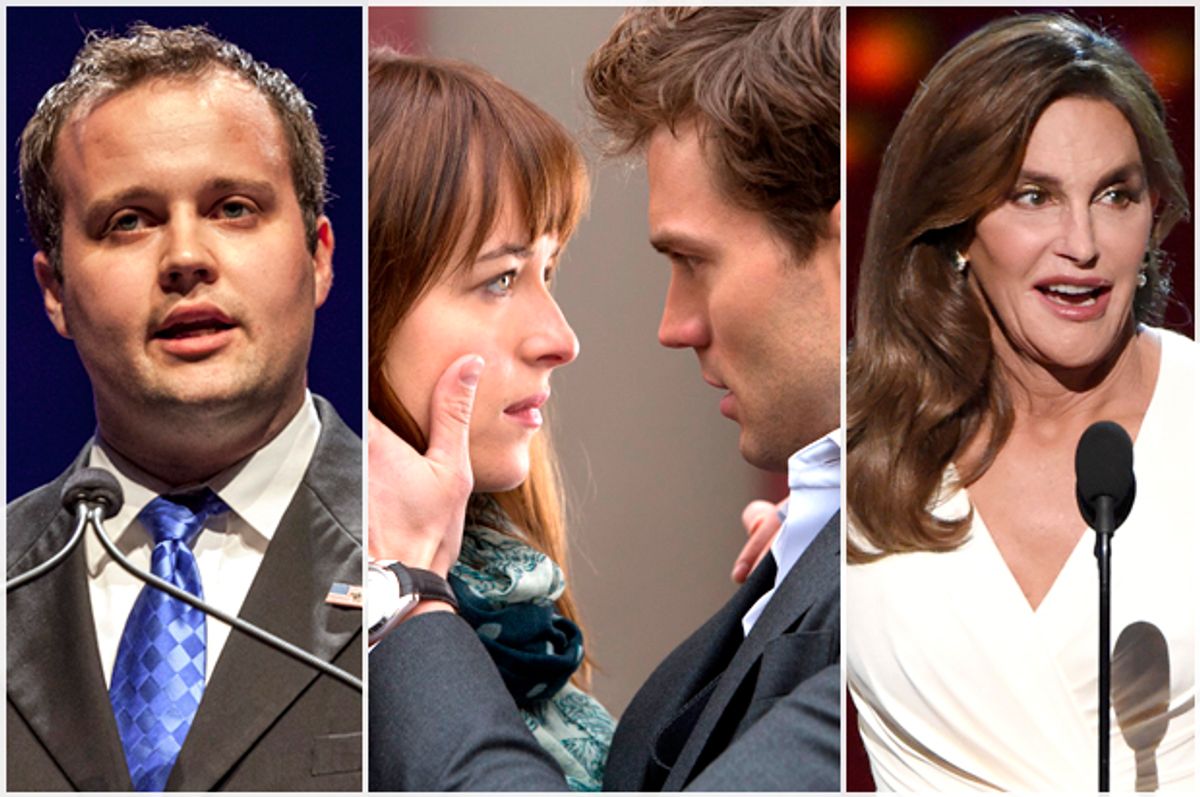 This was the year of Caitlyn Jenner and Bill Cosby, of the Ashley Madison hacking scandal and the movie of “Fifty Shades of Grey.” In some ways, American culture loosened up sexually, but it wasn’t all good news.

To get a sense of the year in sex and gender, we spoke to writer and sex activist Carol Queen. Most recently, she’s the author, with Shar Rednour, of “The Sex & Pleasure Book: Good Vibrations Guide to Great Sex for Everyone.” Salon spoke to Queen from the San Francisco shop Good Vibrations, where she is the doctorate-wielding staff sexologist.

The year 2015 was too complex to encompass in one conversation, but here are some highlights and lowlights. The interview has been lightly edited for clarity.

As we look at 2015, the good and the bad, what stands out for you in the world of sex and gender, and the way we look at both of them?

Possibly the very biggest story was gender and the increasing prominence and gender-fluid discourses, and people and institutions trying to grapple with that. I just read something about pronouns and courts this morning, and looked at links I had squirreled away… There’s a boatload.

Can you tell us about that and why it’s important?

The sex rights movement is a little bit split between whether sex work should be decriminalized – i.e., a consensual act – or legalized – i.e., regulated by the state. Most sex workers probably come down a little bit on the side of [decriminalization] and most outside observers probably are a little more comfortable with the idea of legalization. Amnesty International, being a really significant thought leader around international rights issues… for them to come down on the side of decriminalization is a pretty enormous thing.

They looked at issues of criminalization and abuse of sex workers around the world and figured out that as little state control as possible made it easier for sex workers to get redress if something bad happened to them. They’re not buying that legalization and having to re-up your certificate every so often makes sex work any safer. Globally, of course, sex workers are a vulnerable population... Some of Daniel Holtzclaw's victims were sex workers.

What about the world of scandal? What were the big political sex scandals?

I think one of the most important and interesting scandals – though not the juiciest one – was the Dennis Hastert blackmail scandal. A sex scandal, and looks like a same-sex scandal as well.

And the other thing that I think is a political scandal is the Josh Duggar situation… It’s a media-slash-political scandal because so many politicians have weighed in, like Mike Huckabee – you can always count on that guy! And because it’s being linked up by the right in interesting ways. “They’re harassing the Duggars because they’re such good Christians!” Well, probably that’s not why. And it links up with Ashley Madison.

And if you want just a [sex] scandal, of course, you have Bill Cosby.

How significant did the Ashley Madison hacking end up being? It seemed like a big deal at the time, but what was the fallout like? Did it change the way we think about sexuality?

I think there was some significant fallout in terms of individual stories… To me the most important thing about the Ashley Madison scandal was that it exposed questions about Internet privacy; apparently people making a lot of money on the Internet don’t find ways to take care of it adequately.... The thing I liked best about that scandal was the digging around to see if there were any real women on it… Oh, they’re ’bots!

Did the movie of “Fifty Shades of Grey” strike you as interesting in any way? Did it show the mainstreaming of light S&M or something?

Well, yes but the people who really like SM are really horrified; they’re like, “Don’t watch that movie, read this book! Or go to this party!”

Every decade or so there’s a big, shocking sex blockbuster. And I don’t think “Fifty Shades of Grey” does anything for us that “Nine and a Half Weeks” didn’t do, and probably better… Everything we could say about “Fifty Shades” has already been said, in another decade, about another book or movie. But it did get a lot of ink.

It seemed like trans people were more visible in the mainstream than ever before… Caitlyn Jenner’s magazine covers, for instance.

That’s fair to say – it’s one of the biggest stories of the year. And it was fundamentally a pop-culture question…. Between “Transparent” and [“I Am Jazz”], so much of it has been driven by pop culture… The woman from “Orange Is the New Black” [Laverne Cox] and Lana Wachowski. There are a bunch of people who are not the kind of activists we’d have expected… Without them this change would not be happening.

I was reminded that they [almost] put Chelsea Manning in solitary confinement for having a copy of the Vanity Fair with Caitlyn on the cover….

One of the interesting things about trans visibility is that as people watched Caitlyn’s transition, there was a big backtalk in the trans community, that eventually made it to the show, about people who weren’t as privileged, trans women of color, trans women in prison, violence against trans women…

So there’s been both a “ooh, look how pretty Caitlyn looks” narrative and a “Let’s talk about what this means culturally, everybody listen up” narrative. They’re holding hands in a very interesting way: I can’t think of another social change that is very poppy on one hand and very serious on the other.