How Philadelphia prosecutors protect police misconduct: Cops get caught lying — and then get off the hook

Officer Christopher Hulmes lied under oath, but for years never charged with perjury. Now 500 cases are at risk. 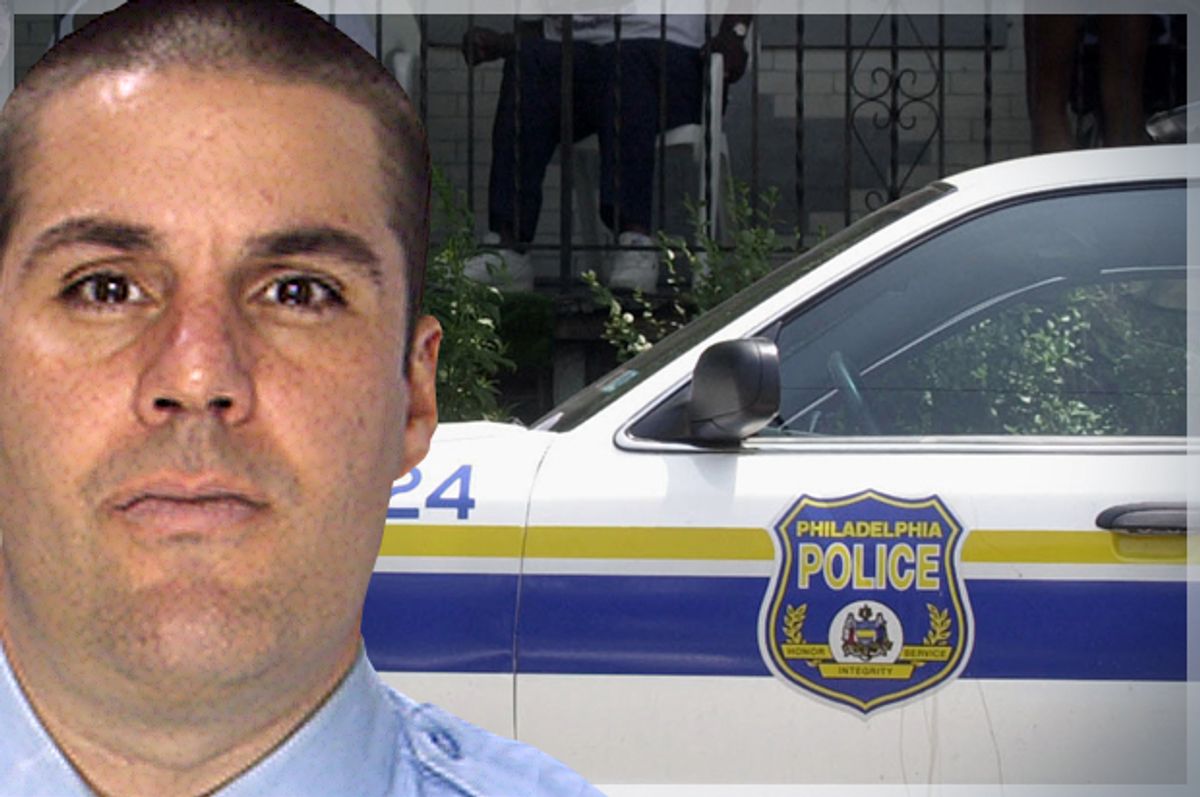 In Philadelphia, widespread allegations of corruption and perjury against members of the nation's fourth largest police department have in recent years shaken the criminal justice system.

Currently, the Defender Association of Philadelphia is seeking to have more than 500 convictions involving Officer Christopher Hulmes reopened and tossed out. In 2011, Hulmes admitted to lying in open court in a drug-and-gun case against two black men who claim they were framed. He did so in front of a judge and prosecutor. But he was not charged with perjury until this April, in the wake of reporting by this reporter when he was employed at the now-defunct Philadelphia City Paper.

Worse yet, police and prosecutors had failed to address prior evidence that Hulmes was a liar.

In 2008, an Assistant District Attorney reported that Hulmes had admitted that he had lied about where police had discovered a gun, allegedly to benefit a defendant who had provided him useful information. The prosecutor reported the lying. But the police internal affairs unit failed to sustain the charges. The District Attorney's Office likewise apparently did nothing. And so, despite one serious allegation of lying and a separate admission of perjury, officials in the D.A.'s Office did nothing to stop him: Hulmes continued to make narcotics arrests on the street, and prosecutors kept putting him on the stand to testify. And now, many of his cases, meritorious or otherwise, will very likely be thrown out.

In recent weeks, Salon has been reporting on police lying in Chicago, where false statements underpin a culture that protects everything from physical abuse to illegal searches. But reviewing cases from around the country show that Chicago is far from alone.

Brad Bridge, an expert in police misconduct at the Philadelphia public defender, says that it may take a while to reopen Hulmes' old cases: First, they have to deal with 1,300-odd petitions seeking to reopen convictions related to six allegedly rogue narcotics officers who, earlier this year, beat federal charges that they rampantly abused and robbed drug dealers.

“Police perjury has a corrosive effect upon the entire judicial system,” emails Bridge. “This has happened in Philadelphia where over 600 convictions had to have been vacated over the past two years where significant doubts have arisen about the truthfulness of the police officers involved.”

There is little evidence that D.A. Seth Williams Office, the Police Department and the city do much to root out police perjury.

The city discusses civil rights cases with the Police Department, says Chief Deputy City Solicitor Craig Straw, who handles civil rights cases against officers. But neither the Police Department nor the city's understaffed Police Advisory Commission could point to any proactive measures that are taken to tackle perjury. D.A. Williams' Office has long hostile to reform despite hopes that he would usher in progressive change, and is currently enmeshed in salacious political controversies. His office did not respond to a request to explain its program to tackle police lying.

In the recent past, even overwhelming video evidence that police were lying wasn't enough to convince Philadelphia prosecutors. In 2010, the extraordinarily brutal police beating of Askia Sabur on a West Philadelphia sidewalk went viral on YouTube. Prosecutors nonetheless charged Sabur, who remained jailed awaiting trial, with assaulting the officer. Police claimed that Sabur had beaten an officer with his baton and reached for his gun—an allegation that was not supported by video evidence. A jury finally acquitted Sabur, but there were never any charges filed against the officer, Jimmy Leocal, who had beaten him most viciously.

“Unfortunately, in some situations even when prosecutors have very good reason to disbelieve the police officer,” they still put him up to testify, says University of Pennsylvania law professor and leading civil rights attorney David Rudovsky. “But the larger problem, I think, is just the uncritical acceptance of what the police say...In a culture in which most people think police tell the truth...the natural reaction of many people is to believe the officer.”

Williams' prosecutors long took a similarly hands-off approach to lying in the Philadelphia Prison System. Last year, City Paper reported that guard Tyrone Glover was accused of assaulting two inmates. In both cases, however, the inmates were charged in connection with assaulting Glover. In one case, however, City Paper obtained video evidence showing Glover assaulting the inmate.

Charges were ultimately dropped against the two prisoners and, recently, Glover resigned under pressure from the DA's Office, according to a law enforcement source.

But no charges were ever filed against Glover. Not only had he committed assault but, apparently, perjury as well: He falsely testified that the inmate in the videotaped beating had hit him first.

In January, DA Seth Williams' Office confirmed a new policy: They would thenceforth require reviewing video evidence, if available, before charging an inmate with assaulting a guard—so as to finally ensure that guards were not using assault charges to cover up their own abuse.

In February, Philadelphia prosecutors announced rare charges related to police lying, accusing Police Officers Sean McKnight and Kevin Robinson with brutally assaulting Najee Rivera in 2013—knocking him from a scooter and then beating him—and lying to cover it up. Initially, it was Rivera who was charged with assault, based on the officers' false report. Surveillance video, doggedly obtained by Rivera's girlfriend (and not by police), proved them liars. (Rivera recently died of a gunshot he sustained during an unexplained street confrontation.)

Seth Williams, announcing charges against the officers, suggested that the Black Lives Matter movement was having an impact on his sclerotic office.

"This type of behavior has absolutely no place in our city and I will prosecute these officers to the fullest extent of the law,” stated Williams. “Simply put, no one — not even police officers — is above the law."

But Williams' prosecution was an exception that proved the rule. Police lying is a systemic problem. Prosecutors like Williams don't want to confront it because their method of doing business relies on its tainted product.