The NBA vs. the NRA: League commish, stars like Carmelo Anthony and Stephen Curry, make brave push against gun violence

You're not dreaming, a major pro sports league appears to have grown a conscience by targeting gun violence 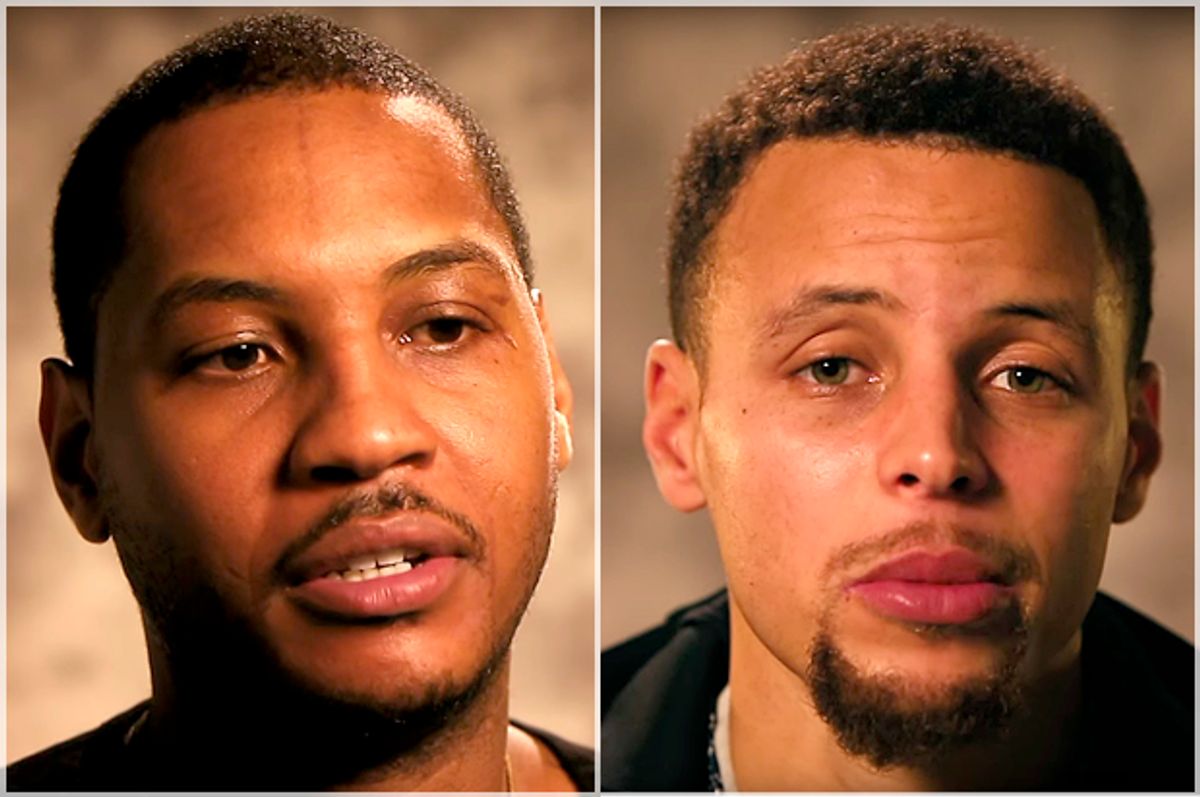 When the NBA suspended Rajon Rondo earlier in the month, it sent a clear message about hate-speech in the workplace. This Christmas,  NBA All-Stars Stephen Curry, Chris Paul and Carmelo Anthony appeared in a league-branded PSA calling for an end to rampant gun violence. That’s two strong progressive statements in as many weeks. Don’t look now, but a major professional sports league appears to have grown a conscience.

The Rondo incident was, to some degree, an internal matter, an on-court concern that also allowed the NBA to make a larger point about targeted homophobia. The league lending its name to these spots, which were paid for by the Michael Bloomberg-founded Everytown for Gun Safety Support Fund, is a far bolder move. Without any league-related incident to serve as a catalyst, NBA Commissioner Adam Silver has decided that the league should weigh in on the most polarizing issue in American life.

Generally speaking, when sports leagues care — as with the NFL and domestic violence or in the NBA’s earlier policing of anti-gay slurs — it’s because they’re trying to staunch a public relations crisis. As a counter-measure, they raise awareness and offer resources but never take a stance that could be perceived as controversial or provocative. While the PSAs don’t offer any course of action, the alliance with Everytown — the left’s answer to the NRA — has the league coming down squarely on one side of the debate.

The NBA has put itself in a position that major sports leagues — multibillion-dollar operations dependent on broadcast revenue — should in theory try to avoid. They’re in the business of attracting new fans, not alienating them. Using the league as a platform for unpopular ideas is deeply counterintuitive; Adam Silver is either an idealist, a visionary or a total moron, or some combination of all three.

This would’ve never happened when David Stern ruled the roost. Despite his reputation as a generous Democratic donor, Stern was disinclined toward anything that would complicate the growth of the league. Depending on whom you ask, he was either a top-down pragmatist or a union-busting demagogue. Stern was so desperate to colonize Middle America that he conspired with Oklahoma frack-lord Clay Bennett to steal the Seattle Supersonics. He unsuccessfully tried to implement a dress code that would make "thuggish" players more accessible to this imaginary new frontier of fandom by mitigating the league’s relationship with hip-hop and marginalizing Allen Iverson’s almost incalculable influence.

Despite having built his career on the success of one Michael Jeffrey Jordan, Stern typically viewed players as a threat or a liability, not partners. By the time he stepped down in 2014, this philosophy made him a dinosaur. Next-gen superstars like LeBron James and Kevin Durant are tatted-up self-starters who roll with hip-hop’s power brokers. Their social media presence has created at least the illusion of authenticity. They also happen to be hugely marketable.

More than ever, the league was defined by players and their vernacular; as the league’s biggest sticking point became a major brand asset, David Stern’s paradigm proved to be completely backward.

Silver has also had to reconcile himself to the fact that players often have more power than the league — or often, they themselves — know what to do with.

Elite players now make enough money through endorsements and outside business ventures that salary is no longer a primary concern. Players are still employees for franchises overseen by the NBA — they don’t own shit, and can’t as long as they are active — but they’ve found ways to leverage situations in ways that would’ve been unthinkable even a decade ago. They have, to some degree, flattened the hierarchy of the league. And with power comes a voice.

NBA players are more outspoken than ever, to the point where “I Can’t Breathe” pregame shirts were almost expected of teams. With power comes a voice, which is why the league has never once fined a player for wearing a protest shirt during warm-ups. Yet Silver’s authority is hardly on the wane. Rather than resist this trend, he’s established a symbiotic relationship between stars' increased willingness to speak up and the league's willingness to stand for something. When he can leverage the voices and opinions of players, Silver can appeal to something other than sheer moral rectitude to inform the league's perspective.

Make no mistake, though: What Silver hath wrought is as shrewd as it is principle. Thanks to NBA League Pass and a robust online community, the NBA’s base engages with the sport more and more each season, consuming and creating basketball-related content at an ungodly clip. Stern deserves credit for taking the league worldwide and inviting women into the fold. But Silver has found an entirely new way to sell the NBA. As my friend C. Benjamin Rucker put it, “Silver has realized what Stern didn't: He can't out-'Good Ol' Boys'-club the NFL. So instead he's positioning the NBA to attract everyone that club excludes.”

In practice, this means making overtures to people who may be ambivalent about certain aspects of sports and reversing that cultural perception.

It’s an unorthodox strategy, one that effectively cedes large swaths of the country to football. But heading into 2016, the NBA knows exactly where it stands, what it stands for. That’s not to say that Silver is making some cold, calculated gesture in the direction of noble sentiment. However, there are certainly advantages to the NBA being viewed as a progressive brand.

But let’s not lose sight of the moment. With millions of people watching, Stephen Curry — the reigning MVP and the league’s most popular player — directly challenged the NRA. If the NBA can continue to empower players to speak out while advancing its own institutional stance on issues, we’ll have a league that, while no less structurally just, has at least altered the dynamic between the league, its athletes and society at large. It takes an awfully hard heart to not view this as some form of progress.