Donald Trump won't back down: His promise to "cut the head off ISIS and take their oil" isn't even the creepiest part of his new TV ad

There's a lot of rage against Muslims and Mexicans, but little new information, in this exercise in demagoguery 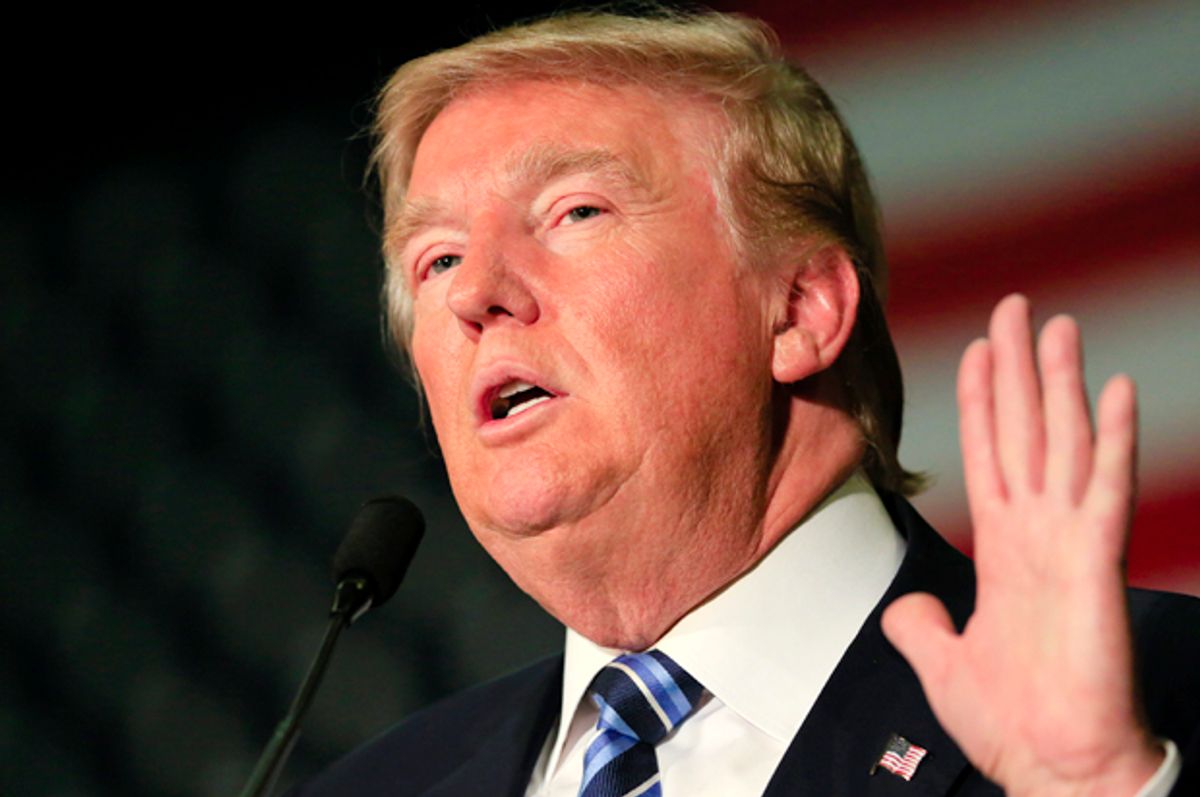 Donald Trump has generated enormous poll support over the last few months, and despite longstanding predictions that he was a fluky celebrity candidate who would fade any day now, he’s stayed at the top. Columnists have written mea culpas about underestimating him. He has – as he’s reminded everyone who will listen – made billions of dollars over the years. And he clearly loves expressing himself, at high volume, on his favorite issues.

But with all the political momentum and capital in the world – and after keeping viewers waiting to see what he was capable of -- Trump has produced something that looks like the trailer to a bad “Mission Impossible” movie as his first television commercial. Between a weird voiceover, a demagogue-like ginning up of fear, and repeating phrases he’s floated in speeches and debates, he’s turned out a major disappointment for those of us who find him sort of interesting. It’s a new year, but there’s nothing new here. He’s just a blunt object at this point.

The commercial, which went up Monday and is aimed mostly at Iowa and New Hampshire, also includes some of Trump’s classic verbal imprecision. “He’ll quickly cut the head off ISIS and take their oil,” the voiceover tells us. (Try to picture that.) And take a guess what the ad ends with? “We will make America great again!!” Hmmn.

A lot of people on both sides of the political aisle want America to be great, and feel a sense of frustration as to where the nation is headed lately. The economy is not much fun for a lot of us. Racial tensions have not been this bad for decades. Mass shootings take place roughly every day. Parents on the left, right, and center worry about sending their kids going to college. Liberals and conservatives disagree about a lot, but there’s a widespread feeling of disorientation: It’s what we have these days instead of the old liberal consensus.

But the commercial places the blame for all of our struggles on “radical Islamic terrorism” and Mexican immigrants. Will a wall – Mexico’s paying for it, by the way – and the cutting the head off bit really do all that? By their nature campaign ads don’t explain plans in detail. But is it really going to be this easy?

It’s worth pondering who the commercial is aimed at, since Trump has already received more media coverage than just about any candidate in history. Is it a TV ad for people who don’t watch TV? Some casual voters might miss the debates, but do they not know that Trump is angry, hates terrorists, and is worried about Mexican immigration?

Part of what the ad may aim to do is show that Trump is not backing down from his most controversial claim. After a description of “radical Islamic terrorism,” the grim-voiced narrator tells us: "That’s why he’s calling for a temporary shutdown of Muslims entering the United States, until we can figure out what’s going on.” We’re 15 years past September 11, 2001, and Trump is going to figure out and tell us “what’s going on”?

Trump will spend about $2 million per week to spread this baby around, by the way. “I am very proud of this ad,” Trump said in a statement. “I don’t know if I need it, but I don’t want to take any chances.”

And there’s more to come. As The Washington Post reports:

In an interview Sunday with The Post, production and that his was a “major buy and it’s going to go on for months.” He said he hopes the spots impress upon undecided voters that the country has become “a dumping ground.”

“The world is laughing at us, at our stupidity,” he said. “It’s got to stop. We’ve got to get smart fast — or else we won’t have a country.”

Are anger and threats enough? So far, they’ve done a lot for Trump. Could shouting a few familiar slogans fend off Ted Cruz, Marco Rubio, Hillary Clinton? Who knows. If this commercial succeeds in stirring up American voters, we’ve got bigger problems than ISIS and immigration.