What "Mad Men" could teach "Downton Abbey": Hemlines aren't the only changes we need to see

Period shows can rely too much on external forces shaping the story—but characters need to evolve, too 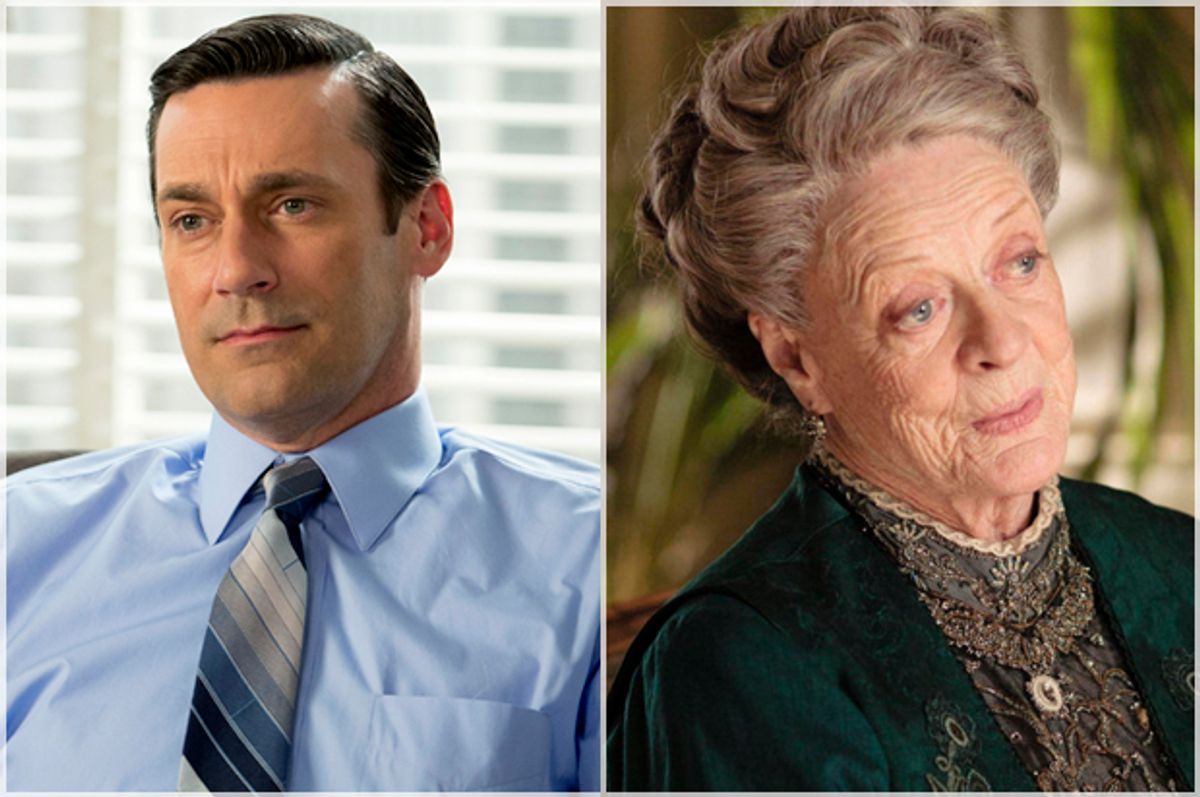 Two shows, both set in a stylized and romanticized past while also attending to serious social issues. A surrounding world that changes a bit each season, as wars and shifts in class and gender produce instability. And a dedicated audience we might call a cult if it were not so large.

And now that “Downton Abbey” nears its conclusion, it’s hard not to compare it to another retro-set show that recently completed its final season. When you put the two next to each other, it becomes clear that Julian Fellowes’ series – for all its virtues – is weakest where “Mad Men” was strongest: The Madison Avenue characters, from first season to last, grew and changed almost as much as the times did. The upstairs-and-downstairs characters in “Downton Abbey,” by comparison, barely budge even as their world moves from the 1912 Titanic disaster to 1925. (The show, which aired its final season’s first episode last night, has already concluded in the UK.)

The characters of “Mad Men” went on real journeys. Sure, Roger Sterling’s mustache and some of the sideburns were silly. But even leaving out Don Draper – a character with more layers and complications than everyone on “Downton” put together – the show still demonstrated how some people evolve over time.

Joan started out a busty secretary – seemingly, at first, a kind of cliché thrown in as eye candy – and took possession of herself and her career as the show went on. Peggy’s metamorphoses into a substantial professional was even more drastic. And these weren’t just you-go-girl tales of triumphs. Their arcs, over the seasons, were persuasive.

Weasely rich kid Pete Campbell marries, becomes a sort of nerd playboy, and then seems to mature and come back to his wife.

Does this kind of thing happen to every marginalized woman or callow male narcissist? Of course not, but “Mad Men” showed how history, and force of will, can change people.

“Downton Abbey,” by contrast, has its characters stuck in place even as Britain and its class system go through the seismic shifts that inspired aesthetic Modernism. It may not be fair to point out that the bitter and pithy Dowager Countess is no different than she was in the first episodes – she’s defined by her refusal to change. But it’s true of most of the other characters as well, from Thomas Barrow, the scheming under-butler, to Lady Mary. (“Sure, scandal, intrigue and tragedy are what initially drew us to this foreign world of titles, entails and illogical hereditary rules,” the Wall Street Journal’s Sarene Leeds asks, “but, come on, Lady Mary Crawley being blackmailed for an illicit tryst again?”)

Do people have traits and tendencies that cause them to repeat the same thing over and over again? Sure.

But the difference between the two programs is not based on a philosophical view or psychological theory. Both “Mad Men” and “Downton Abbey” have a lot going for them. (Since I’ve beat up on the latter, I’ll also say that the series is beautifully shot, generally well-acted, and engagingly told.) But while “Mad Men” attracted attention originally because of its midcentury-modern style, and was often written about because of its social critique – its disapproving/celebratory look at macho office behavior, daytime drinking, consumer capitalism, and so on – by its last season, it was really defined by memorable and convincing characters. (It’s something that clearly guides critic Matt Zoller Seitz’s book “Mad Men Carousel.”)

“Mad Men” had its faults, too. But looking back, it’s hard not to miss the men and women who illustrated how the world was changing in the ‘50s and ‘60s. There’s nearly a whole season of “Downton Abbey” that I (like most Americans) haven’t seen yet; maybe it’s full of complex transformations. Anything’s possible. But it will need to go a long way to catch up with the gang from Sterling Cooper.