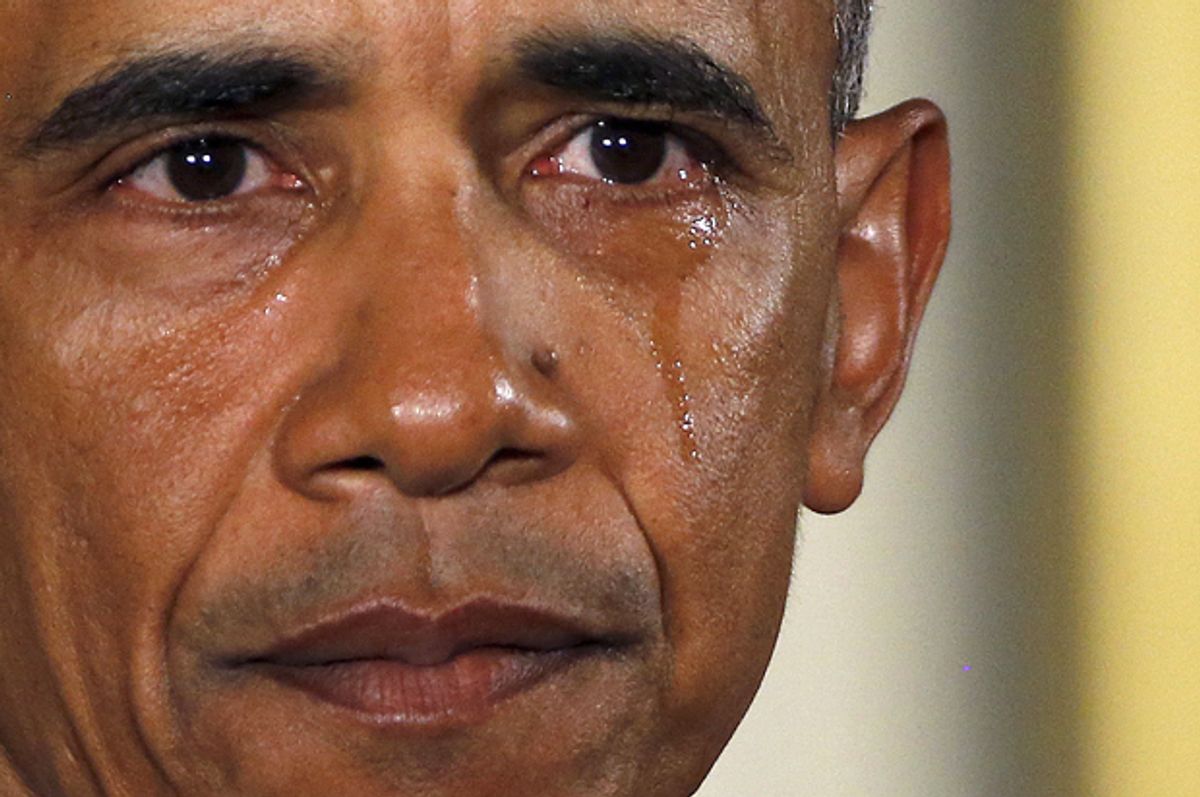 For years now, most liberals have basically abandoned any hope that sensible gun safety laws would be passed in this country. The gun industry owns the Republican Party and will not tolerate losing a single sale, no matter who dies needlessly for it. Right-wing America has made the gun its favorite social signifier, a cross between a religious and psychosexual artifact. The obsessive belief that liberals are out to steal their guns is clearly a stand-in for all sorts of unspeakable and inchoate culture war terrors on the right, creating an explosive temper tantrum the second anyone even mentions the idea of gun control. The size and shape and loudness and irrationality and childishness of it is so over the top and impossible to manage that most liberals have given up.

But in Tuesday's news conference, President Obama made a convincing counter-argument that conservatives aren't the only people who can bring passion to this debate. Surrounded by families of victims of gun violence — the overcrowding of the room helping make his point for him — Obama spoke movingly of the need to do something, even if progress is slow, to reduce all the killing.

As he spoke about the deaths from gun violence, particularly the young children killed in the Sandy Hook Elementary School massacre, he started to choke up, tears welling in his eyes and spilling out.

"First graders .... Every time I think about those kids, it gets me mad," Obama said.

But it was this depth of feeling, even as it is rooted in such deep sadness, that injected real hope into a speech on a topic so many of us have lost hope about. Conservatives may be able to scream and kick their legs and act like you're trying to take away their precious binky when even the slightest gun control regulation is offered, but that reaction can be met with a response that, while far more mature and rational, is equal in its passion.

This issue clearly means a lot to Obama, who got worked up again speaking about the heroism of Zaevion Dobson, a 15-year-old in Knoxville, Tennessee, who perished shielding his friends when a gunman opened up fire on a house where Dobson had dropped in on to play video games with his friends.

But while the speech was an especially emotional one for Obama, it's clear that it's not just emotion that is driving him to use his last year in office to make a big push for gun control, starting with these executive actions to make it harder to dodge federal regulations for buying guns. He's clearly also motivated by a deep sense of how absurd it is that we're even in this situation. As he noted in the speech, many of the regulations that Democrats, such as closing the gun show loophole that people who can't pass background checks use to buy guns anyway, want to pass are wildly popular, even amongst gun owners.

To drive home the absurdity of the current situation, Obama repeatedly pointed out that it's easier for someone who shouldn't have access to misuse a gun than a smartphone. We have apps on our phones that link your phone to your fingerprint or make it so that you can find your phone if it's lost, but because of the gun lobby, we can't require similar technologies to make sure that guns are hard to steal, buy illegally for criminals, or even just be picked up by a curious toddler.

And make no mistake, the reason the gun industry doesn't want these simple anti-theft measure put on guns is because such measures reduce the number of gun sales. While it's understandably difficult to measure, a substantial percentage of gun industry profits come from under the table sales and other such dealings that are illegal or should be. It's not just because, when a gun gets stolen, the legal owner is likely to buy another to replace it. These kinds of safety measures, like tying a fingerprint to a gun, also make it exponentially harder for straw buyers to buy a bunch of guns from a legal dealer and then turn around and sell them to people who can't pass a background check.

Despite all the hysteria from self-declared good guys with guns, all of Obama's executive actions are aimed at reducing the size of the black and grey market for guns that allow people that are currently, under federal law, not allowed to have guns to get them anyway. Right now, many gun dealers get away with selling to people who haven't passed background checks simply by rolling their merchandise into a suitcase and selling it off-premises, at a gun show or under some other auspices that supposedly make it a "private" sale.

The only reason to oppose closing that loophole is if you want people who are legally banned from buying guns to get them anyway. It's understandable why the gun industry wants that, because that increases sales, but the rest of us should be alarmed at how easy it is for convicted felons and wife beaters to get guns anyway, using simple dodges to get out of background checks.

That's probably why Republican denunciations of Obama's executive actions are maddeningly vague. Paul Ryan's response to Obama, released before the speech was even given, does not explain why he thinks it should be so easy for someone who can't pass a background check to simply go buy a gun at a gun show instead. Instead, he claims, "Still, rather than focus on criminals and terrorists, he goes after the most law-abiding of citizens."

But if these dealers are so law-abiding, then why are they so upset at having to make sure that every single person they sell to is legally allowed to own a gun? That is the question Republicans can't answer, the question that all their hyperbolic temper tantrum throwing is meant to distract you from.

Unfortunately for them, Obama doesn't seem like he's going to be so easily distracted in his last year of office.