One's a "patriot." One is dead: Ammon Bundy, Tamir Rice and the real story about race, Oregon and whiteness in America

Oregon is about guns, right-wing media and state violence as well as race. But it shows our racial inequity clearly 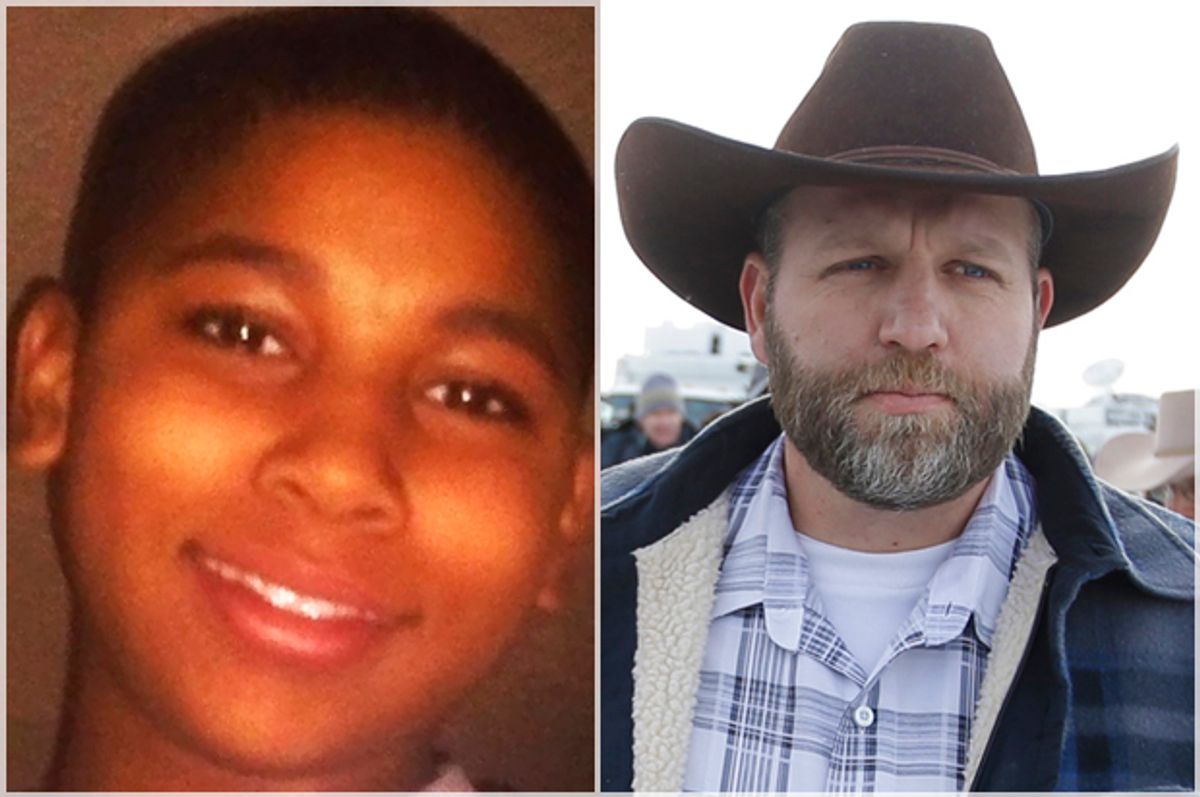 I recently wrote two pieces on white privilege and the occupation of federal property in Oregon by a gun-toting terrorist insurrectionist “militia” that is led by the sons of Cliven Bundy—the Nevada rancher who, with the aid of an armed group of anti-government protesters, stood down federal authorities in 2014 because he did not want to pay his back taxes and grazing fees.

Those two works—one that was quite short and posted on my Facebook page; the other a longer piece that was featured here at Salon—have been shared and commented upon hundreds of thousands of times on social media and elsewhere. When an essay on race (especially when it explores questions surrounding white privilege) goes “viral” there is a predictable range of reactions.

Some readers have responded with rage and anger because to discuss the connection between white privilege, state violence, guns and right-wing politics is verboten to them.

Other readers have been very positive and supportive. As was seen online at “Black Twitter,” many people were quick, and quite correct, to point out the hypocrisy regarding how the United States government and its agents are apparently much more likely to use violence against people of color (and especially Muslims in the post 9/11 era) than they are white Americans. With that observation, a powerful example was summoned: Tamir Rice, a black child playing with a toy gun was summarily executed by the Cleveland police; white people can brandish real guns and point them at the police and federal authorities, yet somehow they manage to (for the most part) survive unharmed.

There were other readers who are plugged into the right-wing conspiracy theory/Fox News/Alex Jones echo chamber. Epistemic closure visits ignorance and disinformation upon those who are self-exiled within the right-wing media. These readers defended the Oregon “militia” brigands with claims that the latter are “freedom fighters” who are standing up against “tyranny”--as opposed to the plain fact that they are insurrectionists protecting poachers.

Among the many thousands of comments (and several emails that I have also received), there were a few that offered a reasonable and insightful intervention. Several folks are concerned that the white Oregon “Bundy Brigands” insurrection is 1.) about “more than race,” and 2.) that somehow a discussion of the color line and white privilege is a distraction from “the bigger picture.”

To the second point, my response is that to critically interrogate matters of race and the color line is to better understand almost every aspect of American life and culture. The color line cannot be decoupled from American society. To run away from this fact is ironically to cede the centrality of race to America’s history and present. In practice, ignorant and willful “colorblindness” is a malignant and perverse type of “color consciousness” that too often enables white supremacy in the post-civil rights era.

To the first point, are the events in Oregon about “more than race?” Absolutely! Bundy’s Brigands are a nexus for many other important matters of public concern in American society.

The Oregon insurrection is an example of how the Right-wing media has cultivated a culture of anger, aggrievement, anti-government conspiracy theories, and victimology among its consumers. The idea that publicly held land is a form of “tyranny” is absurd. However, the right-wing media and the Republican Party are part of a political religion which holds that the government is always the enemy, a baby to be drowned in the bathtub, as opposed to a force for potential good. Sarah Palin’s death panels, claims that the Affordable Care Act is akin to “slavery,” the foolishness of a “War on Christmas,” and the dunderheaded political opportunism of the “Benghazi” witch hunts, are part of the same distorted and conspiranoid right-wing political imagination that excreted the Oregon “militia” “standoff.”

In all, there is something profoundly wrong with America’s sense of civic virtue and righteousness when some would hesitate to call Dr. Martin Luther King Jr. or “Black Lives Matter” activists “freedom fighters,” but those same people enthusiastically embrace using such language to describe right-wing militias and anti-government activists who want to suck off the public teat while avoiding paying any taxes or fees to do so.

The right-wing media protects and nurtures the likes of Cliven Bundy, his sons, and the broader militia movement by giving them attention and using honorifics, i.e. the word “patriots,” to describe their treasonous behavior.

Bundy's Brigands are also white men with guns. White ammosexual identity is nurtured and protected by the National Rifle Association, the Republican Party, and the right-wing media. These gun-obsessed civic deviants are described by the right-wing, and unfortunately also the so-called “liberal media,” as being members of a “militia” when in reality they are rabble who are engaging in armed insurrection against a democratically elected government. The gun industry encourages the armed cowboy cosplay of groups such as Bundy’s Brigands in Oregon by marketing assault rifles and other weaponry with allusions to “freedom,” “democracy,” the myth of the American frontier and the Revolutionary War.

Bundy's Brigands are also an example of how certain economic interests are protected in America. If this group of terrorist insurrectionists had staged their "standoff" at Wall Street for example, they would have been beaten up, arrested, and disappeared by the police, private security forces, and the Federal Bureau of Investigation.

The rhetoric of capitalism and the iconic and empty Americana images of the yeoman farmer and cowboy are also operative in the "Oregon Standoff" as well. If Bundy's Brigands were liberals and progressives demanding a fairer and more equal democracy, forming grange associations, or people’s economic collectives and banks, the reaction by the United States government and the corporate news media would be very, very, different. As was seen with Occupy Wall Street, the surveillance and punishing state would infiltrate and try to destroy the movement. The corporate news media would legitimate this anti-democratic behavior by slurring and defaming the activists and other social change workers who are involved with it.

Moreover, the efforts by militias, as well as those of individuals such as Cliven Bundy and his sons to privatize public land, cannot be separated from how corporations and other interests would like access to those areas. Neoliberalism considers the very notion of “the commons” and “the public” to be anathema to an organizing logic where all things are to be privatized, sold off to corporations, in exclusive service to the plutocrats, and where the working classes and poor are deemed useless eaters. Bundy’s Brigands and other right-wing militia groups speak of “freedom” from “tyranny,” but in reality they are unwittingly (or perhaps, in some cases, intentionally) working to replace an ostensibly elected and free American government with an unelected corporate dictatorship.

The Oregon insurrection is a great opportunity to participate in the too oft used “teachable moment.” History, as it always does, should inform our analysis of current events. This leads us to a necessary empirical question, one that can be answered, and likely has already been, by social scientists and historians. How does the American State respond to protest behavior by different racial groups? How are the events in Oregon similar or different from how the Philadelphia police decided to firebomb the headquarters of the African-American radical organization known as MOVE during the mid-1980s? Are the events at Ruby Ridge and Waco outliers for how the state uses violence against non-whites, exceptions that prove the rule? What of the freedom struggle by First Nations peoples in the American Indian Movement in the 1960s and 1970s?

Is the United States government (and its agents) more likely to use violent force against black and brown people as compared to whites? While both my intuition and the evidence would seem to suggest “yes,” this is not an “unknown unknown”--to borrow from Donald Rumsfeld--the answer is something that can actually be determined.

Bundy's Brigands benefit from several types of privilege, with white privilege being central among them. But, white privilege is only one dimension of a bigger system of power relationships in the United States and West. We ought to look broadly for answers while also being mindful of the specific details and aspects of what is being studied. Bundy’s Brigands are not a Rosetta Stone for American politics. They can however, help us to better understand its dynamics.