Revisiting Springsteen's "Asbury Park": A word-drunk gem that went back to basics in a big way

It's not quite "The River," but at 42, the Boss's debut remains a brilliant explosion of language and attitude 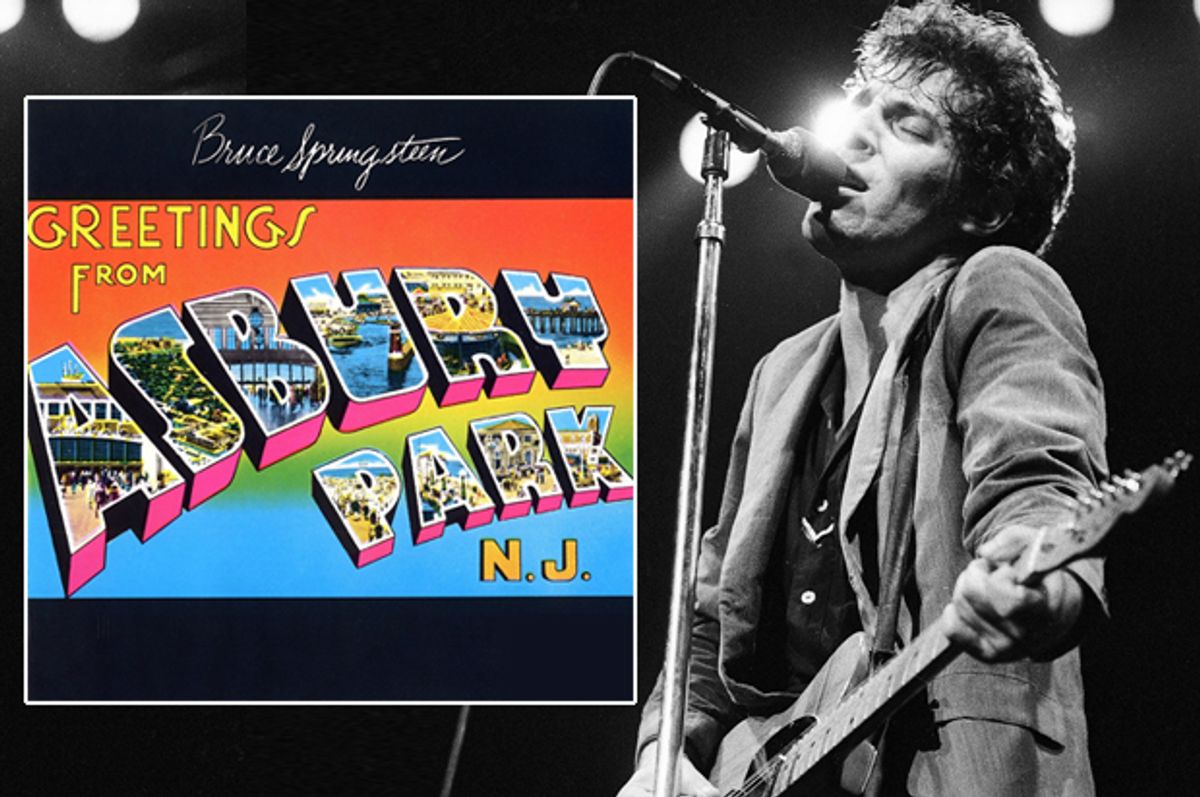 Bruce Springsteen has been part of the conversation lately because of “The Ties That Bind,” an expanded version of his 1980 double album “The River,” which apparently could have stood to be even longer than it was.

Today, January 5, turns out to be the exact release date of Springsteen’s 1973 debut, “Greetings From Asbury Park, N.J.” Going back to it now, it’s striking how good it is, as well as how word-drunk it seems. In its simplest sense, it’s an album by a musician still in his early 20s who’s in love with language and rock ‘n’ roll. “I was the king of the alley, mama I could talk some trash/ I was the prince of the paupers crowned downtown at the beggar's bash,” he sings on the song’s hard-swinging last track, “It’s Hard To Be a Saint in the City.”

A lot of it, of course, is brashly confident and driven by a young male ego. But while “Asbury Park” lacks the world-weariness of "Darkness on the Edge of Town" or “The River,” it manages more depth and self-awareness than a lot of rock debuts. “Growin’ Up,” despite its dropped g and lyrics that are nearly overdose on metaphor, is oddly mature in its sense of life’s journey

“Asbury Park” didn’t sell terribly well when it came out in 1973; it was mostly critics who championed it. Here’s Lester Bangs:

He's been influenced a lot by the Band, his arrangements tend to take on a Van Morrison tinge every now and then, and he sort of catarrh-mumbles his ditties in a disgruntled mushmouth sorta like Robbie Robertson on Quaaludes with Dylan barfing down the back of his neck. It's a tuff combination, but it's only the beginning.

Because what makes Bruce totally unique and cosmically surfeiting is his words. Hot damn, what a passel o' verbiage! He's got more of them crammed into this album than any other record released this year, but it's all right because they all fit snug, it ain't like Harry Chapin tearing rightangle malapropisms out of his larynx. What's more, each and every one of 'em has at least one other one here that it rhymes with. Some of 'em can mean something socially or otherwise, but there's plenty of 'em that don't even pretend to, reveling in the joy of utter crass showoff talent run amuck and totally out of control….

Bangs here is almost as showy as the young Springsteen himself. And it’s worth noting: The Band and post-“Astral Weeks” Morrison were defined by an economy of language, a verbal modesty: Springsteen really was bringing something new to that more rustic, understated tradition with his way of packing as many metaphors and similes as he could into a song, and singing in a way that gets as many words into a song as possible. Some of these songs are like explosions of language and figures of speech.

Musically, it’s lively and fleet, a lot less muscular than what the E Street Band would deliver later. Clarence Clemons plays saxophone on a few songs, though he’s a much lower-key presence than he’d become later.

"Asbury Park" came out as rock music was changing, especially in Britain. Genesis, David Bowie (who said goodbye to Ziggy Stardust that year), and Roxy Music were playing with gender and classical music. Kiss made its live debut; Pink Floyd’s “Dark Side of the Moon” sold like crazy. (Funk and disco seemed to be in a different world at that point, but it’s worth noting that Marvin Gaye’s “Let’s Get It On” album came out that year.) There was also a traditionalist move that had begun with records like The Byrds’ “Sweetheart of the Rodeo.”

In that context, “Asbury Park” was sort of a back-to-basics album -- more or less psychedelic in its language, but traditional in its music, looking to the American past for inspiration. The space aliens and sexual outlaws of glam rock are, needless to say, not part of this vision.

It’s worth wondering what Springsteen’s career would have been like if he’d stayed on the folkie course of his debut record. (His label, Columbia, was pushing Springsteen as the latest “New Dylan” figure.) Either way, you don’t have to be a Boss obsessive to want to revisit this one, and ponder how he got from here to “The River” and beyond.