A "Hamilton" miracle: I lost the ticket lottery, but discovered something priceless

The show honors the America we need—inclusive, ambitious and generous of spirit, even on the cold streets of NYC 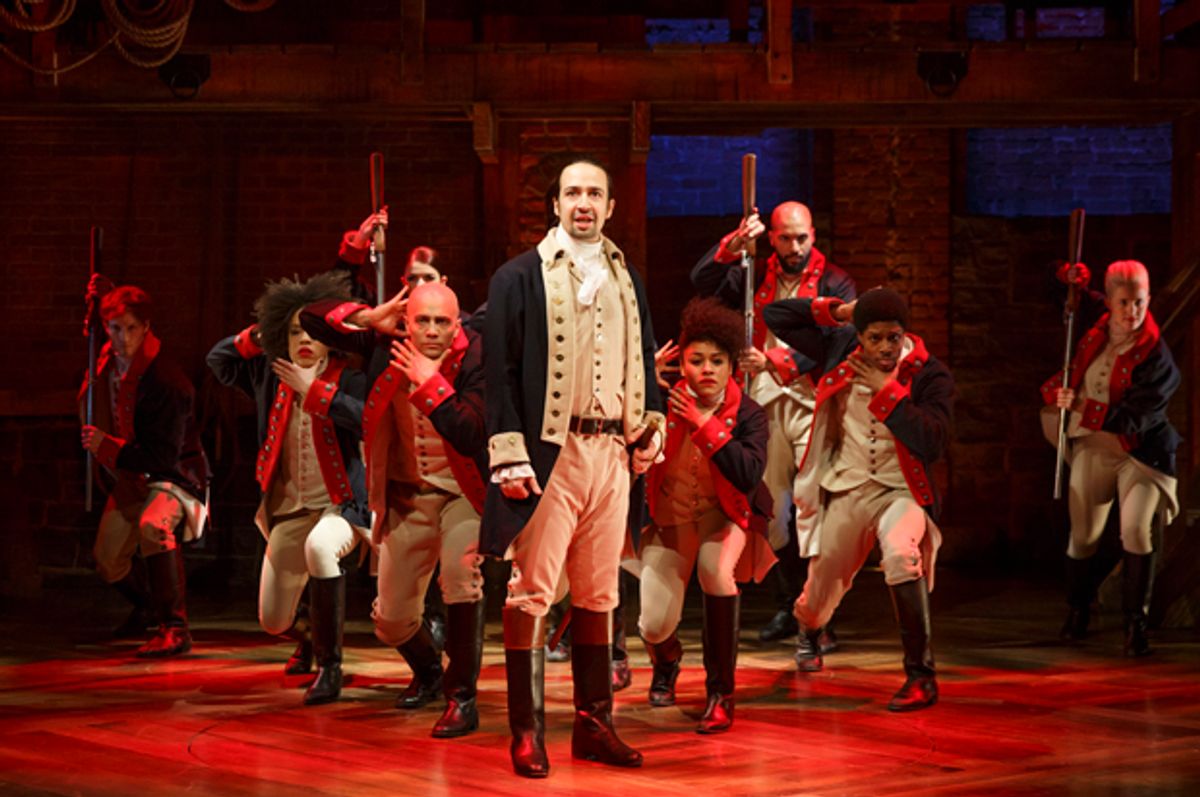 It is tempting, when one considers its mechanics, to think of theater as an inherently elitist medium. Where art forms like film and television strive to become cultural phenomena by reaching the widest possible audience, a physical theater can only accommodate so large a crowd, a talented cast and crew only stage so many productions. In order for a Broadway musical to catapult itself to national awareness, it must rely on another asset: scarcity.

In the case of a musical that has achieved not only national awareness but universal acclaim, extreme scarcity. Hosting the Kennedy Center Honors Gala last month, Stephen Colbert joked to a crowd that included "Hamilton" creator and star Lin-Manuel Miranda, “As I stand here humbled by the beautiful John F. Kennedy Center of Performing Arts, surrounded by some of the most influential people in politics and culture, I am inspired to ask, can anyone get me tickets to 'Hamilton'?”

So it is especially tempting to question, when one stands shivering on the sidewalk of 46th Street with hundreds of other hopefuls, whether theater might be the precise wrong medium for this show. This show, whose message – embedded deeply in its story of a penniless man's rise to power through sheer force of will (“Just another immigrant,” its lyrics tell us, “comin' up from the bottom”), in the breadth of its cultural allusions, in the diversity of its casting – is the inclusivity of American ideals. If even cultural giants can't get in the door, what chance do us mere mortals have?

A minuscule one, perhaps, but not zero. For two hours before every performance, a handful of names are drawn out of a hat, as twenty-one tickets are lotteried away for just $10 apiece, the origin of “#Ham4Ham.” A rapt crowd, which, three times a week, is treated to a free sidewalk show from cast members and special guests, huddles together with crossed fingers. The show launched a digital lottery this week that will take its place for the remainder of winter, with a return to standard practice in spring. The whole process might bring out the worst tendencies of New Yorkers if it weren't so deeply random. And fairness is, perhaps, the best catalyst for camaraderie.

Even those of us who pride ourselves on our icy exteriors feel them thawing as the names are called. Lucky winners are told to raise either one or two fingers above their heads to claim the respective number of tickets. More of the former, of course, means more names to be drawn, so those who exhibit restraint are rewarded with ferocious applause. In a city filled with family and friends, I couldn't imagine passing up the chance to bring a guest along. But when the name of an elderly woman from Australia, in town for just one more night, is called, she openly weeps and raises a lone finger, a gesture reminiscent of the show's logo.

Soon, she'll be sitting front row during one of the musical's powerhouse songs “The Schuyler Sisters.” “Look around, look around,” its lyrics compel even the rest of us, the members of the slowly dispersing crowd. “History is happening in Manhattan and we just happen to be in the greatest city in the world.”

“How does a bastard, orphan, son of a whore and a Scotsman, dropped in the middle of a forgotten spot in the Caribbean by providence, impoverished, in squalor, grow up to be a hero and a scholar?” asks Aaron Burr in the opening lines of "Hamilton." It is a refrain invoked repeatedly throughout the cast recording album, most notably to draw a parallel between Alexander and the nation he played a vital role in founding. (“How does a ragtag volunteer army in need of a shower somehow defeat a global superpower?” Burr later asks.) The comparison is one of the most resonant themes of the musical's soundtrack. “I'm just like my country, I'm young, scrappy and hungry,” an eager Alexander tells fellow revolutionaries.

We are told often of the dangers of ambition, so much so that the word connotes a sense of pettiness, but in Hamilton it takes on an idealism of sorts. At one point, a smitten Angelica Schuyler, a wealthy aristocrat, transparently asks Alexander, “Where's your family from?”

“Unimportant,” he replies. “There's a million things I haven't done. But just you wait, just you wait,” another moving throwback to the opening number. Later, both Alexander and Aaron sing their infant children songs of revolution turned ordinary songs of parenthood. “You will come of age with our young nation. We'll bleed and fight for you, we'll make it right for you. If we lay a strong enough foundation, we'll pass it on to you. We'll give the world to you,” they sing. As the narrative develops, the questions change. Listeners find themselves asking not “How could Alexander build a nation such as this?” but “How could a nation such as this have been built by anyone else?”

Miranda, for his part, has strongly resisted comparisons between Hamilton's genius and his own, perhaps because it falsely assigns a sense of ease to his success. “I'm not a fucking genius. I work my ass off. Hamilton could have written what I wrote in about three weeks,” he's said. “It took me a very long time to wrestle this onto the stage, to even be able to understand the worldviews of the characters that inhabit my show, and then be able to distill that.”

“I don't pretend to know the challenges you're facing, the worlds you keep erasing and creating in your mind,” Alexander's wife sings. Our forefather's revolutions were political, their roles carved out in the country they created. Our generation's revolutions are cultural, the worlds we're creating and finding a place within exist on stage and on screen, world's whose influence are pervasive. “When I get called in for stuff for Hollywood, I get to be the best friend of the Caucasian lead,” Miranda once said. “If I want to play the main guy, I have found, I have to write it.” And who other than Miranda, the son of an immigrant raised in Inwood, could have so deftly crafted and wholly embodied the role?

The marriage of personal and political ideals is innovative and fresh from an artistic perspective, but from an immigrant's it is at once natural. Immigrants, after all, in transplanting themselves into unfamiliar worlds necessarily created new ones, carving roles out for themselves and for their children. Their embrace of American values was an active choice, a journey. It is, perhaps, why we speak so often of America as an experience. An exchange. A community.

And so it seems that, for a show whose message is the inclusivity of American ideals, theater might be the exact right medium. For just as democratic governments derive their power from the the governed, performance derives its power from the audience. For a few wondrous moments, whole worlds are created. Then erased. Then created anew. There is no physical product, just an experience. An exchange. A community.

“Look around, look around,” Angelica sings, breathing in the revolution. “New ideas in the air.” She talks of Thomas Paine's Common Sense and of the Declaration of Independence. “We hold these truths to be self-evident that all men are created equal, and when I meet Thomas Jefferson, I'ma compel him to include women in the sequel.” A remark that could have been delivered as a wry scoff is instead presented joyously, with fervor, a frenetic energy suggesting infinite possibility. Perhaps a lottery lost today, but the promise of another tomorrow. And, in the mean time, a transcendent voice reminding us, “Look around, look around, at how lucky we are to be alive right now.”