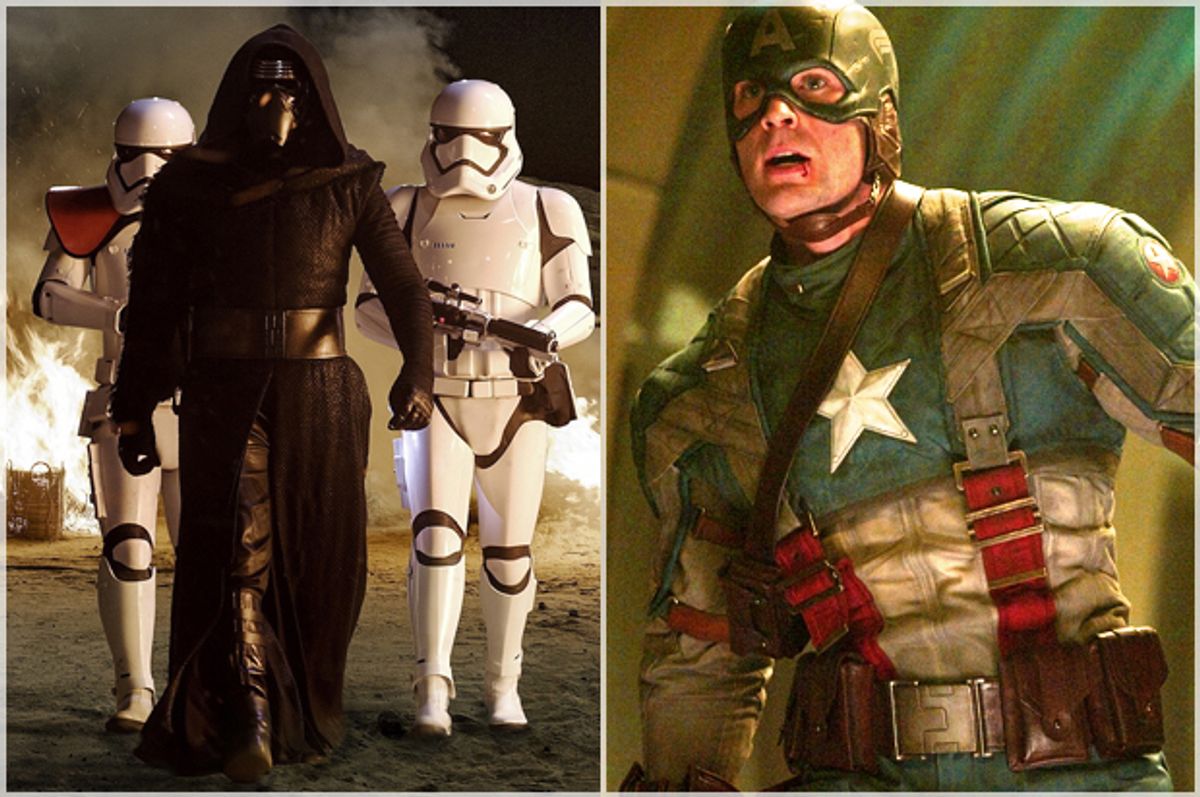 How much “Star Wars” is too much? On the most obvious level, it’s a stupid question — not to mention a mendacious question, coming from the critic who shamelessly milked his microsecond of notoriety as an early “Force Awakens” detractor for everything it was worth. No amount of “Star Wars” could possibly be too much, and the Disney/Lucas empire is going to prove it by stuffing Jedi-themed product down our gullet until we explode from an overdose of the Force, like one of those French geese fattened up for liver pâté.

Despite the inevitable backlash from disgruntled fans and critics — yeah, some Canadian told me to go die, but overall my mail has been supportive by about 10 to 1 — J.J. Abrams’ big sequel or remake or whatever you want to call it (fans have informed me I was wrong to characterize it as a reboot, and they are correct) is a huge hit, and has temporarily reversed the inexorable downward slide in Hollywood’s box-office receipts. If you squint and fudge in just the right light, “The Force Awakens” is now sorta-kinda the biggest hit in United States history, and has maybe a 50/50 shot of catching “Avatar” for the No. 1 global spot.

Actually, a further word on Disney’s loud crowing this week about “SW:TFA” having reached the status of Biggest Movie Ever. That word would be “oh no, you don’t.” If you adjust for inflation — which is, y’know, how actual economic comparisons are done — it’s not even close. According to Box Office Mojo's seemingly reasonable calculations, “The Force Awakens” is now roughly the No. 21 movie of all time, well below such titles as “The Lion King,” “Snow White and the Seven Dwarfs” and “The Exorcist.” It will certainly climb a fair bit higher, but I’m not convinced it will earn the extra $300 million required to catch “Doctor Zhivago” at No. 8. And I would bet Donald Trump’s bottom dollar that it won’t get anywhere near the all-time champ, “Gone With the Wind,” which made almost $200 million in 1939 dollars, in a nation with less than half our current population where the typical movie ticket cost less than a quarter.

That’s a footnote to my supposed point, but kind of an important one: The new “Star Wars” is a big movie, for sure. But it’s not quite as ginormous and culture-dominating and universally beloved as Disney wants us to think it is. The bigness of “TFA,” or at least the idea of its bigness, is a central element of the Mouse House strategy to spin “Star Wars” into a marketing, merchandising and entertainment empire that spans the globe in all directions.

There are at least five more “Star Wars” movies in the works, counting the two sequels to “TFA” and three or so canonical “Star Wars Anthology” works, including the story of the young Han Solo (long before he is [redacted] by [redacted] at the climax of “Force Awakens”) and a rebel saga that fits in between “Revenge of the Sith” and the original 1977 “Star Wars,” aka Episode IV. (The subject and setting of the third contemplated anthology film remain unknown.) Without going all geeky and in-universe, which I couldn’t really pull off anyway, I recognize that there may be limitations to how many more golden eggs the Disney masterminds can squeeze out of this goose. But do you think they will stop at five? Do you even really want them to?

No, let’s not talk about “want.” Disney knows all too well what we want. Now that the viability of the money-printing machine has been certified, we have to assume that all sorts of other things are in the pipeline. At the moment, the Disney Channel animated series “Star Wars Rebels” is the only TV property, and the online role-playing game “Star Wars: The Old Republic” is now four years old (although it has had several recent upgrades and remains popular). A flood of new product is certainly coming on those fronts, but that stuff takes a lot of time and money to create. Anyway the true plunder is to be found elsewhere, in the cheap crap manufactured in Vietnam and Indonesia: action figures and board games and fast-food tie-ins and Bed Bath & Beyond merchandise and so on. My son really likes R2-D2. You have no idea how many pairs of R2-D2 socks it is possible to acquire.

In effect, the plan is to brand every visible object on the face of the earth as a “Star Wars” product — except, of course, for all the stuff Marvel Comics got to first. Marvel’s Vader-like rulership of all media, over 20 years and three dozen feature films, along with numerous video games and a recent successful invasion of TV drama, is the obvious model for Disney’s “Star Wars” strategy. On a corporate level, in fact, the global competition between the two is literally an internecine struggle, since both Marvel Entertainment and the production side of Lucasfilm are now wholly owned subsidiaries of the Walt Disney Company.

It’s a bit like the Cold War in 1953, if the Soviets and the Americans Russians had been owned and operated by the same bankers. (Such conspiracy theories exist, but I’m not going there.) Marvel and “Star Wars” can agree to carve up the world without destroying each other, but nobody gets to be neutral and all attempts at cultural independence or third-way resistance must be crushed. Of course nobody in the Cold War got to be both a Commie and a red-blooded American, whereas we are all invited to feel swaddled, comforted and nurtured by the endless juvenilia of both the Marvel and Disney/Lucas universes.

Is my tone a mite judgmental? A tad hurtful? That could be. But the problem is not that lots of people love space operas and superhero action movies. That part is great. Nobody is actually forcing you to see such things if you don’t want to, as the real-world evidence makes clear. (“New ‘Star Wars” almost as big as ‘Ben-Hur’” is not quite the headline Disney wants to see.) Nor is the problem that fans of super-popular genre movies feel oddly wounded when their fetish objects are subjected to actual criticism, as if “Iron Man 3” were some cherished subculture phenomenon misunderstood by the squares. I mean, that happens and it’s definitely irritating, but it’s not the real problem.

No, the problem is that huge cultural monoliths like the Marvel and “Star Wars” universes appeal to Hollywood’s worst instincts. They exaggerate the totalitarian pattern of the blockbuster era, when the entire movie business is built on a handful of big popcorn movies whose “pre-awareness” quotient virtually guarantees success. After “John Carter” and “The Lone Ranger” and “Tomorrowland” — none of which was actually all that dreadful — why would any studio executive ever green-light a big-budget original script when s/he could just order up the third Spider-Man reboot within 15 years or a whimsical tale of Jabba the Hutt’s early days or a Wolverine/”50 Shades of Gray” R-rated crossover? (That last one isn’t actually happening, to be clear, although it’s solid gold.)

This has obviously been a sound business strategy to date, or perhaps we should say an apparently sound one. I have confidently predicted in the past that the Marvel juggernaut was about to run out of gas, and I have always been wrong. There is no reason to believe that the upcoming roster of Avengers and X-Men and Captain America sequels will slow the incoming cash flow, or that any of the “Star Wars” sequels and spinoffs will be a commercial failure. The effects, however, are indisputable: Certain other kinds of movies that the studios used to make (those aimed at, ahem, grownups) are driven into the mid-budget prestige death zone of Oscar season. Many others become cable TV productions or low-budget indies or don’t get made at all.

Hollywood executives are feeling super-terrific about themselves this winter, as they lounge around the swimming pools of Palm Springs. After many years of decline they believe they have found a formula that will keep the business alive into the indefinite future. But it’s a zombie version of life, weirdly unsuited to a cultural era that is supposedly about narrowcasting and microniches and individualized marketing. Nobody knows how long the studios can keep making money by making the same exact Marvel Comics and “Star Wars” movies over and over again, with the occasional pseudo-dark Batman flick to spice up the broth. A long time, no doubt. But in terms of the long arc of cultural history, it’s just a flim-flam act. It’s like saying that “The Force Awakens” is the biggest and best thing that has ever happened, when we all know it’s nowhere near as big as “101 Dalmatians.” Or as good.