When money matters more than lives: The poisonous cost of austerity in Flint, Michigan 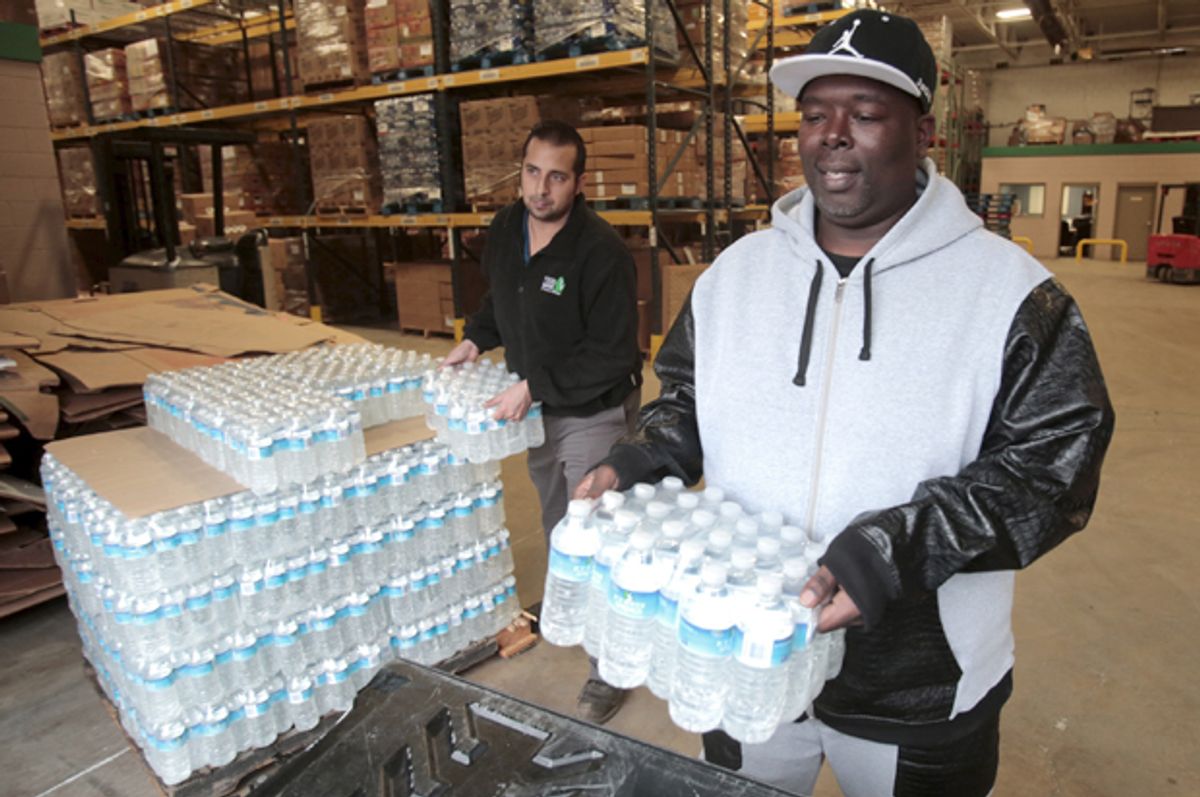 Bottled water is picked up from the Food Bank of Eastern Michigan to deliver to a school after elevated lead levels were found in the city's water in Flint, Michigan December 16, 2015. (Reuters/Rebecca Cook)
--

A few days ago my partner and I were sharing some of our less-pleasant encounters in the New York City subway system. Nothing too outrageous, just the kind of awkward run-ins with mentally unwell people that have long been part of living in this city (and have become harder to avoid as of late). If you live here long enough, you eventually become pretty inured to these moments; but they’re still always a little sad.

Sometimes, though, they’re not so much sad as they are scary. Far more often than not, people suffering from severe mental health issues are harmless. But that’s not always the case. My partner, for example, recounted that once she accidentally — but very slightly — stepped on a woman’s foot. She apologized, but for the rest of the time my partner was on the train, this woman was screaming at her. My partner knew it wasn’t really about her, of course; but it was still a shitty experience.

After she told me her story, I said, only half-kidding, “That happened to you because a lot of people in Tribeca and Lenox Hill don’t want to pay more taxes to fund better mental health public services.” I was being flip to some degree, but what I meant — and what I do believe — is that these kinds of systemic failures always have a cost. The question is whether it’ll be paid by the affluent, in the form of taxes to fund public services, or by regular people, who have to experience, first-hand, the consequences of neglect.

The idea of “negative externalities,” in other words, goes well beyond a carbon tax. It also matters to the welfare state. On the one hand, you have fossil fuel companies that want others to pay for climate change’s damages. On the other, you have “small government” types who want others to pay for the results a threadbare safety net. Nations that can’t afford to build seawalls watch ocean levels rise with horror, while those who can’t afford taxis or a driver are berated by impoverished and unbalanced strangers on the train.

It’s hard not to think of that broken dynamic while reading about the possibly criminal negligence that’s caused the rate of lead poisoning among children in Flint, Michigan, to double in just a few years, and forced the state’s Republican governor, Rick Snyder, to declare a state of emergency. The poisoning was the result of decisions made by the “emergency managers” Snyder dispatched to run the near-bankrupt Flint. And as Vox’s Libby Nelson recounts, their goal was to save money:

Flint, under the control of a state-appointed emergency manager, decided to save money on water. It had been purchasing water from Detroit, but costs had been climbing even as Flint's population fell. In 2013, the city decided to join a new, regional water system that, like Detroit, drew water from Lake Huron. The switch would save millions of dollars per year.

The problem was that the regional water system wasn't yet built, and Flint wanted to start getting its water from somewhere other than Detroit right away.

So the city started taking its water directly from the Flint River in 2014 — celebrating its break from Detroit with a countdown and a toast, Michigan Radio reported.

Not a terrible idea, on its face. Just the kind of technocratic and efficient cost-cutting that Snyder, who likes to call himself “one tough nerd,” made central to his political brand. But the problem, as you might have guessed, was that this idea was more clever than good. After all, it doesn’t really matter how cheap your water is if it’s poisoned:

Residents started complaining about the water's smell and taste almost immediately, saying it caused rashes, hair loss, and other health problems. A nearby General Motors plant said the water was damaging its car parts and quit using it. At one point, residents had to boil water due to bacteria.

But the city assured them that everything was fine, and that the bad smell and taste didn't necessarily indicate other problems. They claimed federal tests showed the water was safe.

Even as other problems with Flint's water were uncovered — bacterial contamination, as well as high levels of other contaminants that can cause liver problems — the lead poisoning remained hidden.

In late June, an employee at the US Environmental Protection Agency's Chicago office leaked a report on Flint's water to a local activist, whose son had developed a rash after swimming in a pool filled with Flint water and was diagnosed with lead poisoning. It said tests found high lead levels in the water. The city had told the woman the lead came from her plumbing, not the water.

Flint’s city managers resisted admitting their colossal mistake as long as they could. But after Virginia Tech researchers “found elevated levels [of lead in the water] in 40 percent of the homes the researchers tested,” Nelson writes, the objective facts soon overwhelmed the spin. One study found that, in the worst-affected areas, the percentage of children under 5 with elevated levels of lead in their blood had gone from 2.5 to more than 6. Another found that the overall proportion of Flint children so affected had doubled.

Finally, after allowing who knows how many people to continue drinking poison, Flint started handing out water filters. It's buying its water from Detroit again, too.

If you don’t know already, the reason lead poisoning is so serious — and the reason the focus has been its effect on Flint’s children — is because it can wreak serious damage on still-developing brains. As Nelson writes, there is no amount of exposure to lead that is regarded as safe, and it can lead to “learning disabilities, lower IQs, and impulsivity.” The down-the-road costs for Flint will doubtless be substantial, even placing aside the results of the inevitable class-action lawsuit.

The human costs, meanwhile, are difficult to comprehend. It’s likely that there are many children in Flint whose lives will never be the same. And all this because the powers that be in Lansing — who dispatched the city managers who signed off on using the water from the Flint River — responded to the Great Recession with a draconian program of austerity. They wanted to save some money; and now the cost of "small government" will be borne by those who can’t afford it. Again.