After extremist settlers killed my neighbors in a West Bank arson attack, we still can't get the one thing we want from the Israeli military: Protection

It is the Israeli army’s duty to protect us, but we have seen how they safeguard their own children, not ours 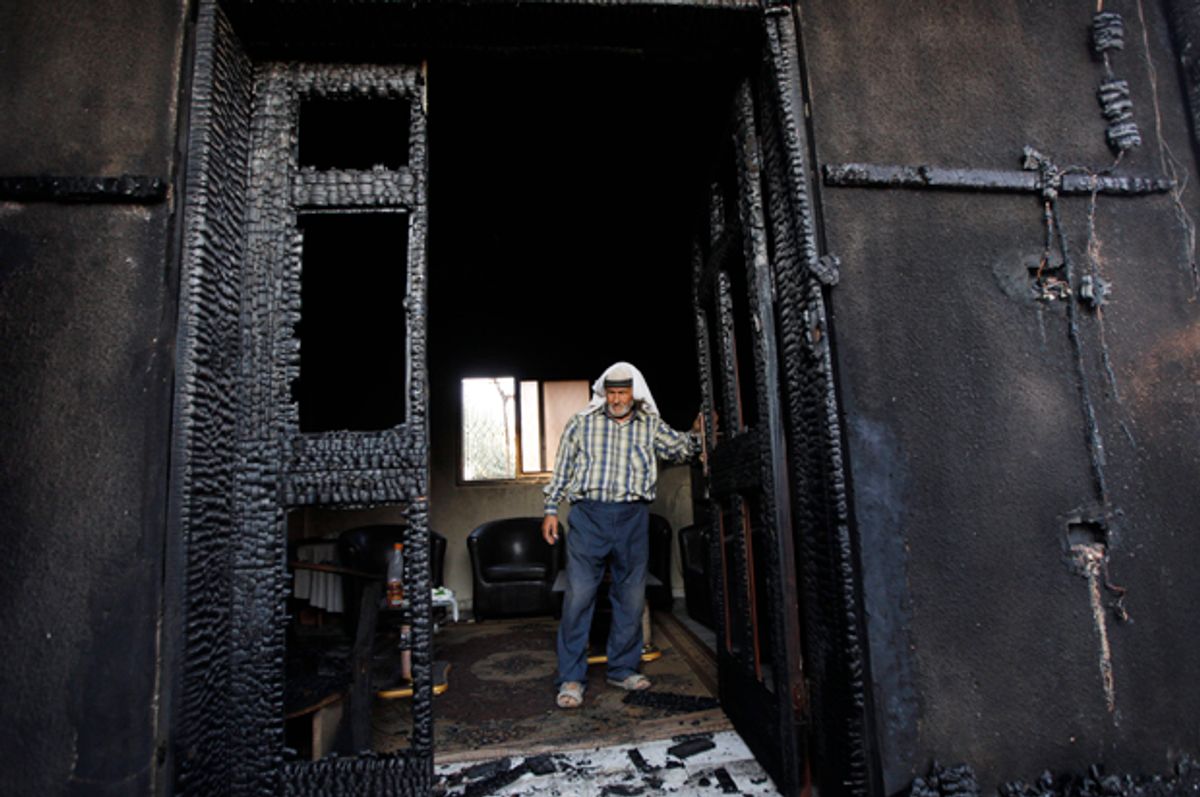 A Palestinian inspects a house after it was torched in a suspected attack by Jewish settlers, killing an 18-month-old Palestinian child and his parents, at Duma village near the West Bank city of Nablus. (AP/Majdi Mohammed)
--

In the early hours of July 31, my husband, Mamoun, received a phone call from his brother: Our home in the West Bank village of Duma was on fire. Mamoun and I jumped in our car and drove from Nablus (where we had been spending the night with our five children) to Duma, where we found the first floor of our two-story house entirely decimated by fire.  Our neighbor’s house (Sa’ad and Reham Dawabsheh, distant relatives and close friends) had also been burned. Hebrew graffiti on our walls reading “The Messiah King lives” and “Revenge” indicated that the fire had been set by extremist Israeli settlers.

My immediate family was lucky: We were not at home when the settlers doused the two houses in flammable liquid and threw Molotov cocktails inside. Tragically, Sa’ad, Reham and their two children (18-month-old Ali and 4-year-old Ahmed) were home. By the time Mamoun and I reached Duma, Sa’ad, Reham and Ahmed had been pulled from the blaze, but neighbors were still searching for toddler Ali. His tiny, charred corpse was located in the house soon thereafter. Sa’ad, Reham and Ahmed were rushed to hospitals inside Israel, in critical condition. Sa’ad died of his wounds a week later. Reham, a math teacher, succumbed in the early hours of Sept. 7, just a day after her birthday.   Her 12- and 13-year-old pupils were among those marching at her funeral, demanding justice for the murder of their teacher. Little Ahmed, though improving slowly, is still in the hospital.

The world, including the Israeli government, cried out against the attack that killed baby Ali and his parents, and burned our houses, labeling the perpetrators as Jewish terrorists. Last Sunday – five months after the attack – two Israelis were charged in the deadly arson.  One of the young men, Amiram Ben-Uliel, age 21, spent many of his formative years indulged by the Israeli government as he lived in settlement outposts regarded as illegal by both the international community and, putatively, Israel itself.

Yet, despite the indictments, the residents of Duma have still not been granted the one thing that we desperately need: protection.

In the months since the attack that claimed the lives of my neighbors, settlers have tried to return to Duma repeatedly. Twice, villagers called the Israeli army to thwart them. On several other occasions, a night patrol composed of young men from the village deterred the settlers. My 17-year-old son has stood guard on the roof of our house until 2 or 3 in the morning, monitoring the main road where settlers have parked their cars, trying to approach Duma on foot through the olive trees.

The emotional and psychological harm is deep, and only deepens as settler attacks of Palestinians have increased during the escalated violence of the last three months. At a recent wedding in Jerusalem, Orthodox youth were caught on film dancing with guns and knives, and stabbing a photograph of baby Ali Dawabsheh. My family, and the entire village of Duma, stay awake, frightened, night after night, wondering when the settlers will return, and whose home will be the next target.  We are unable to offer our children the most basic thing that every parent seeks to provide: safety and protection.

Duma falls under direct Israeli military control, but sadly, we cannot rely on the Israeli army to provide that security for us. The system of occupation that we live under ensures that Israeli lives are valued above Palestinian lives. Settler attacks against Palestinians have quadrupled since 2006 (according to the United Nations Office of the High Commissioner for Human Rights), often taking place either with direct army collaboration, or with the military refusing to intervene. According to the Israeli human rights group Yesh Din, 98.1 percent of the complaints of settler violence that Palestinians submit result in no conviction. Though legally, as the occupying power, it is the Israeli army’s duty to protect us, we have seen time and again how they act to safeguard their own children, not ours.

The same standard of protection that Israeli children know must be offered to my children.  Every child – Israeli or Palestinian – has the right to safety. Every child has the right to go to sleep without fear that they will wake in the middle of night with their house burning around them. But for the children of Duma – for Palestinian children in general, living under a system of profound inequality – who will guarantee that protection, and how?

Eman Dawabsheh, from Duma, West Bank, Palestine, lives next to the charred home of Sa’ad, Reham, Ahmed and Ali Dawabsheh.