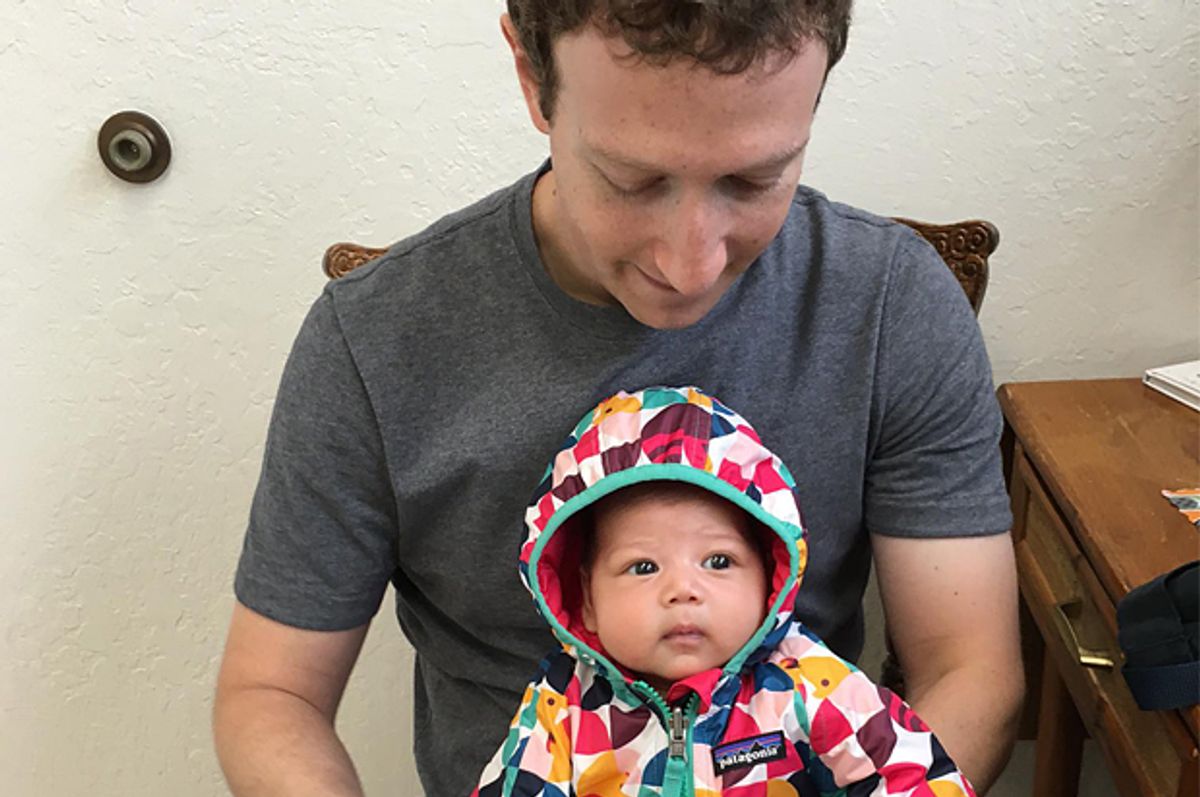 I guess maybe you just needed to reassert yourselves. Maybe you've been feeling like you haven't had as much attention since the glory days of that big measles outbreak a year ago. Well, congratulations, anti-vaxxers. You're still the literal worst.

Late last week, zillionaire hoodie aficionado Mark Zuckerberg posted — like you do — an adorable photo of the proud dad holding his one month-old baby daughter Max as she rocked a seriously cute Patagonia snowsuit. Who could take issue with such a sweet image? Well, pair it with the no doubt intentional "This is what responsible parenting looks like" subtext of Zuckerberg's caption "Doctor's visit -- time for vaccines!" and, 70 thousand comments later, you've got your answer.

The encouraging thing about the ensuing kerfuffle is that the responses to Zuckerberg's post have been mostly positive. But there are still plenty of people who have a Facebook account and no idea that protecting your children — and the other humans who may have contact with him or her — from diseases is not a conspiracy but an actual proven good idea. After one mom posted, "As a mom to a child that was vaccine delayed due to health reasons, I am so appreciative to those parents that do vaccinate. Vaccines save lives and not necessarily just your child's," another woman jumped in to explain, "You're a moron, herd immunity=I'm a moron who knows sh*t about anything. Keep taking the flouride, [sic] they got you good."

Another woman, who claimed to have known someone with brain damage from vaccines wrote, "Why bash the antivaxxers? Vaccines are a pharmaceutical… A pharmaceutical that carries at least a risk of harm to some, should never be mandated." There were, of course, conspiracy theorists, as well as the ones who argued, "No one's saying to welcome disease - that would be absurd. But it's fundamentally a cleansing, recuperative process, and it's critical to consider, and acknowledge the capability to mount the symptoms that accomplish that task as essential." Because yay, disease.

My fave was the person who just confidently said, "Vaccine is poison for human kind. It kills more people than it helps. I wish people don't take it as an example here."

As the Washington Post notes, Zuckerberg's position on the subject is clear. Last year, he chose Eula Biss' "On Immunity: An Inoculation" as a Facebook book club pick, explaining, "This book explores the reasons why some people question vaccines, and then logically explains why the doubts are unfounded and vaccines are in fact effective and safe." And it observes that Zuckerberg's pointed championing of vaccinations may have a personal element — in recent years, Silicon Valley has languished with below-average daycare and preschool vaccination rates.

Of course there are potential risks to vaccines, just as there are risks to driving cars and walking down the street. Diligent parenting means having conversations with your pediatrician about a schedule that works best for your child, and being alert to potential side effects. It doesn't mean blowing off a simple way to prevent diseases — especially if you're basing your concerns not on real risks but crazy talk on the Internet and debunked studies by disgraced frauds like Andrew Wakefield. Just last year, yet another study, from the Journal of American Medicine, found "no harmful association between MMR vaccine receipt and" autism spectrum disorders.

It's not an issue of "You do what's right for you and we'll do what's right for us." Vaccines keep everybody safe and keep all-but-eradicated diseases from coming back. With his post, Zuckerberg, ever an innovator, is protecting his daughter and setting a good example for his followers. And despite the loud and misinformed naysayers, mission accomplished. As one user put it simply, "Thanks for being responsible!"