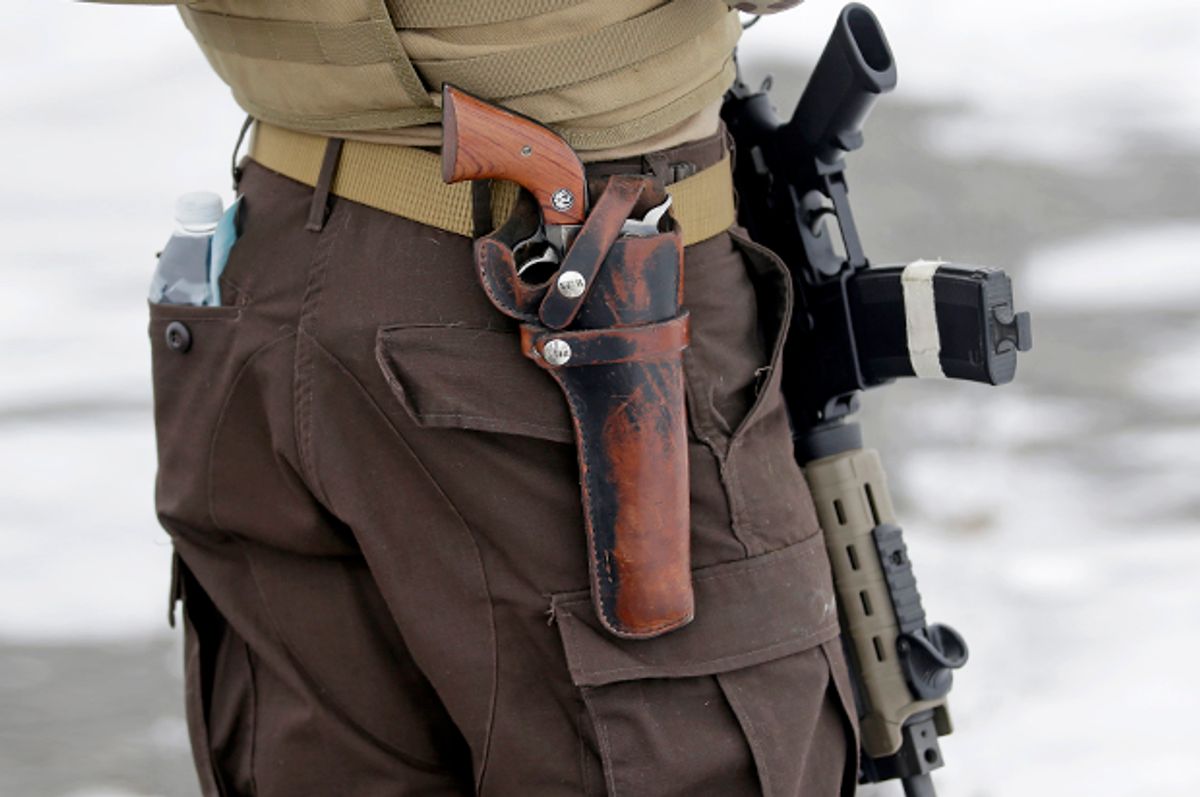 If we needed even more proof that Internet “rule 34,” which Urban Dictionary defines as “pornography or sexually related material exists for any conceivable subject,” we need look no further than the armed militia led by Ammon Bundy. The group, under the name Citizens for Constitutional Freedom, is currently occupying the Malheur National Wildlife Refuge near Burns, Oregon, an unfolding story that, despite raising important issues about terrorism, race and extremism, is also clearly more than ready for some crowdsourced mockery. Perhaps it’s only fitting that such a bizarre story has now inspired some appropriately bizarre erotica.

Last week, the Decemberists’ lead singer, Colin Meloy, took to Twitter with the hashtag #bundyeroticfanfic, in which he played up some of the more over-the-top elements of the story and took them in a decidedly sexual direction.

Users have even responded in real time to developments in the story, such as the release of a long list of supplies requested by the group, according to a Twitter posting by writer JJ MacNab, which includes Miracle Whip, hay, honey, French vanilla creamer, money and gaming supplies.

Erotica author Leonard Delaney, who last year published Microsoft Word Clippy smut, has also gotten in on the current events erotica action with his e-book "Oregon Patriots Occupied My Butt," in which hero Cap, dressed in a Captain America costume, stumbles across the militia, dressed in camouflage and led by “Aimon,” who are more than ready to stake their claim to good ole’ American values:

“Who are we?” The Bear shouted.

“A group of people using terror, violence, and threats to intimidate for political purposes!” the crowd returned.

“What do we call ourselves?”

“A militia!” they shouted in the best terror-inducing voices.

“And what do we want?” The Bear said.

“America! And something about land! And no more government! And the army killing jihadists and immigrants!” they shouted back.

Stephen Colbert has called the occupation a “sausage party,” and in Delaney’s version, which takes place at the Bill Maher Memorial Wildlife Refuge, this concept gets taken to its full homoerotic potential with passages like:

Each man looked much like the one before: pale-skinned, bearded, pudgy, and glassy-eyed. He probably wouldn’t remember many of their names, but there were a few that had neatly trimmed goatees and all their teeth, and he couldn’t keep his cock from shifting as they asserted dominance with bone-crushing handshakes.

But, fittingly, it’s gun love that takes center stage in both the Twitter fiction and Delaney’s version.

And here’s Delaney, whose characters name their guns things like Madame Liberty and Little Miss Manifest Destiny, getting very hands-on with the man-on-gun action:

As Cap looks on, the militia members prepare to join forces with their guns:

All three of them raised their assault rifles, standing the guns on their butts and kneeling behind them. The Bear’s gun became oily as he fingered it. A moment later, a monotone voice came from a speaker in the side of the gun. “I AM READY.”

“Hear that boys? Botsy’s all lubed up and ready to go!”

Each of them stuffed his penis inside his gun, then began writhing against it. Garnth reached around the jacked off the magazine and pistol grip at the same time. Aimon squealed with delight as he bent his rifle over and fucked it from above

“My God Almighty,” Aimon said. “I never imagined how good cock could be. It’s like holding a gun for the first time.”

Even though Delaney starts the book off with a disclaimer that he’s just a Canadian looking to cash in on current events, he does close with a happy ending—both kinds, where everyone is sexually pleasured and the militia voluntarily decides to disperse. Whether or not the real life militia disperses, there will likely be a steady supply of dirty minds eroticizing it.