The Kim Davis sideshow is back: Which GOP lawmaker invited her to the State of the Union — and why is it a secret? 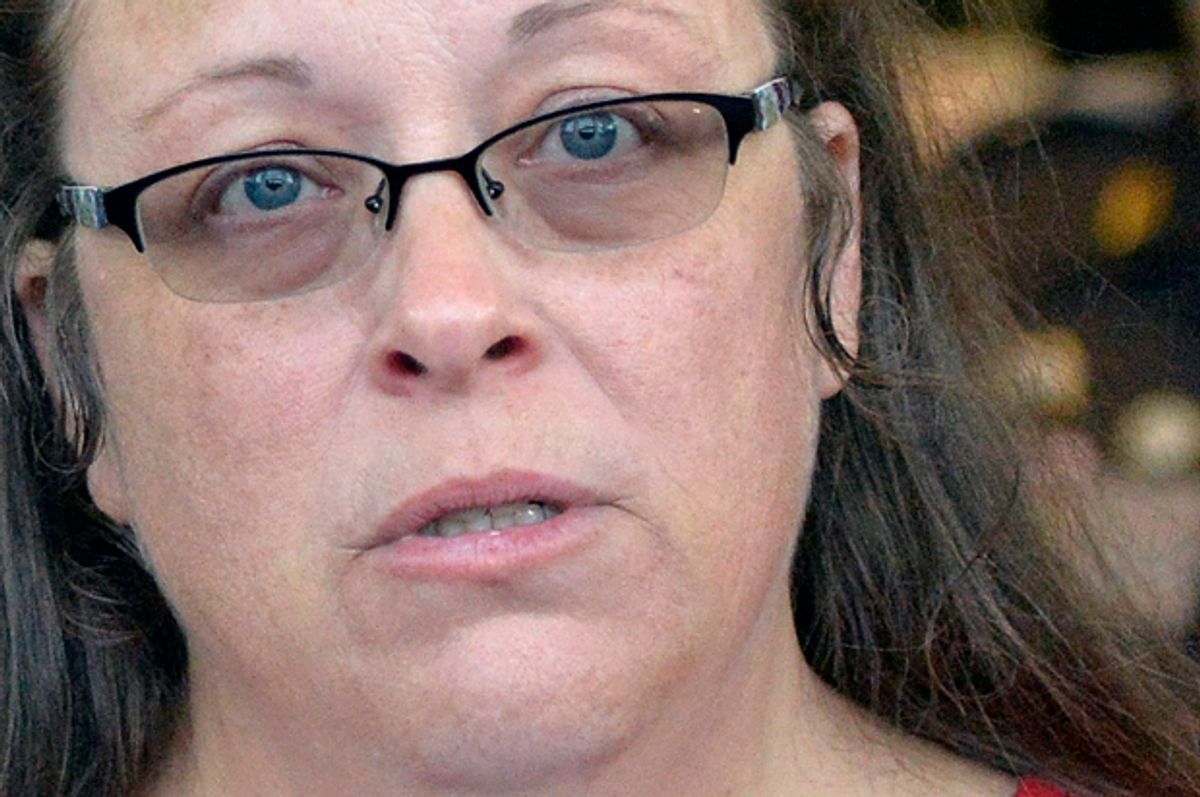 Eager to stretch her fifteen minutes of 2015 fame into the new year, Kim Davis, America's sweetheart symbol of how very oppressed white Christian heterosexuals are, is going to attend Obama's final State of the Union address. Now, how did she wrangle that one?

Kentucky county clerk Davis, you will recall, became a future trivia question answer back in September when she decided she it would cool to buck the Supreme Court and refuse to issue marriage licenses to same-sex couples, on the grounds that it would go against her religious beliefs. For her convictions, the four-times married Davis spent five days in jail and earned the fawning endorsement of the religious right. Upon her release from jail, Ted Cruz and Mike Huckabee couldn't trip over themselves fast enough to get next to her. She followed up her stunt by getting back to work and petulantly announcing, "Any unauthorized license that they issue will not have my name, my title or my authority on it. Instead, the license will state that they are issued pursuant to a federal court order." She was back in court in November, losing her latest appeal to deny her fellow Americans their constitutional rights.

Davis — and folks at the conservative Liberty Counsel, who are pulling the strings here — clearly enjoys the spotlight attention of a stunt appearance. Back in October, the Counsel gleefully announced that Pope Francis met privately with her in Washington, D.C. during his visit to the U.S. She claimed at the time that he'd told her, "Thank you for your courage," and to "Stay strong." The Vatican, perhaps feeling a bit railroaded, soon after issued a statement saying, "Pope Francis met with several dozen persons who had been invited by the Nunciature to greet him as he prepared to leave Washington for New York City. Such brief greetings occur on all papal visits and are two to the Pope's characteristic kindness and availability. The only real audience granted by the Pope at the Nunciature was with one of his former students and his family. The Pope did not enter into the details of the situation of Mrs. Davis and his meeting with her should not be considered a form of support of her position in all of its particular and complex aspects."

Given Davis and her crew's love of a stunt, it was perhaps not surprising that she and her supporters would make a run at the president's final State of the Union. On Tuesday, Liberty Counsel announced that Davis and her attorney would be present for it "as a visible reminder of the Administration’s attack on religious liberty and an encouragement for people of faith to stand." The statement ends with the ominous warning that "God can and will use anyone who is committed to Him."

But while it's fun to imagine the cutaways from the president to Kim's best attempts at psyching him out with some pointed eye rolling, it's also amusing that no brave Washington insider has come forward to take credit for arranging this little event. As MSNBC reports, "Liberty Counsel will not say which Republican lawmaker invited her to attend tonight’s State of the Union. 'We are not publicizing that information,' Charla Bansley, Liberty Counsel’s communications director, told MSNBC. 'I don’t think we’ll ever publicize it.'" She said the same to Buzzfeed: "We are not publicizing what congressmen invited Kim and Mat." In other words, let's bring in Kim as a distraction in case Obama wants to talk about something like equality and dignity for all Americans, but let's also be shady enough to not own up to it. Well played, Christian conservatives, you've done it again. And by it, I mean, behaving like manipulative cowards.