It was U.S. regime change and a decade of brutal war that led to the rise of ISIS, not Saddam — it's official 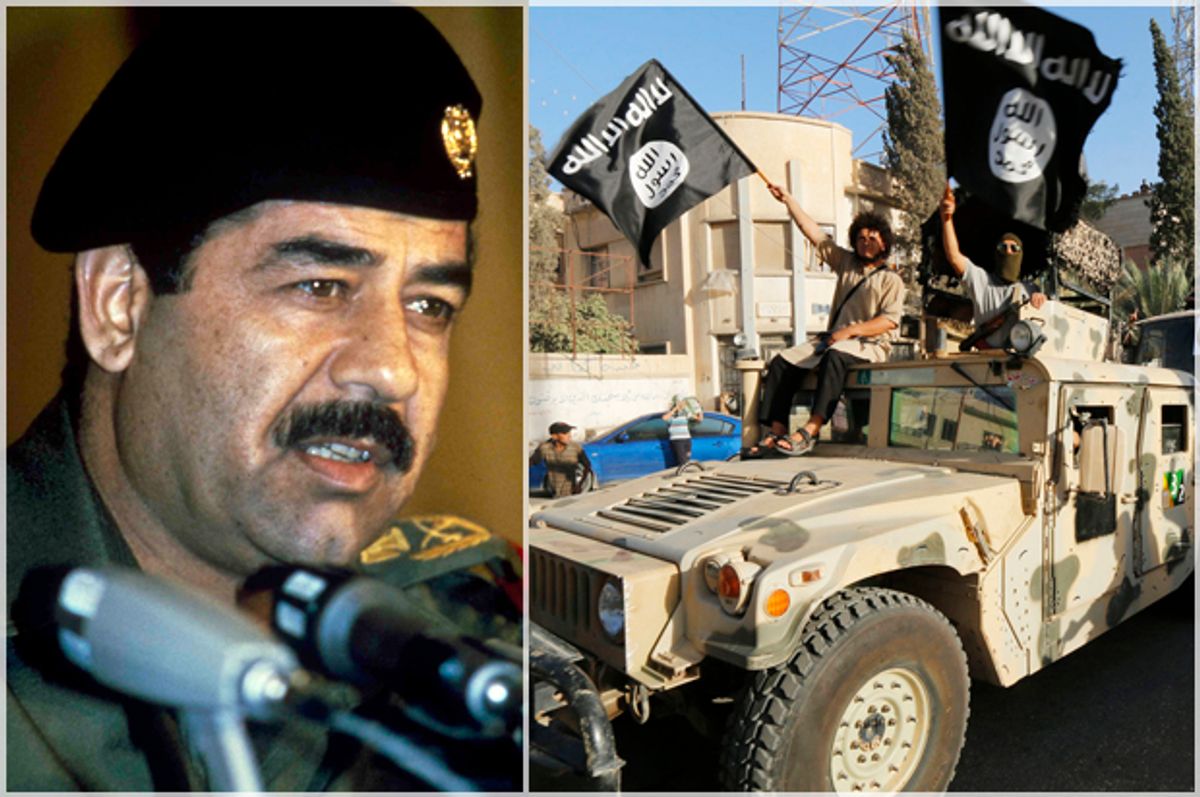 It is now common knowledge that the destructive U.S. war in Iraq is one of the primary factors that led to the rise of ISIS.

Washington began its almost nine-year war by "de-Baathifying" and completely dissolving the Iraqi government. In the years that followed, U.S. support for an autocratic Shia-led government and brutally violent Shia militias instigated a sectarian civil war in a country in which Sunnis and Shias had long lived as neighbors.

More than 1 million Iraqis died in the war, according to a study authored by the Nobel Prize-winning medical organization International Physicians for the Prevention of Nuclear War. "And this is only a conservative estimate," the report notes.

The recognition of Western culpability is no longer controversial. Even former British Prime Minister Tony Blair has admitted that the chaos that resulted from the Iraq War — along with the catastrophic conflict in Syria — spawned ISIS. In October, Blair apologized for backing the invasion, which the U.N. explicitly said was illegal, and conceded, "You can't say that those of us who removed Saddam in 2003 bear no responsibility for the situation in 2015."

With their old excuses falling apart, therefore, defenders of the Iraq War have resorted to creating the most ludicrous myth yet: The idea that Saddam Hussein somehow birthed ISIS.

This argument generated controversy in late December, when Kyle Orton, a fellow at the hawkish, neoconservative British think tank the Henry Jackson Society (which is named after the fervently anti-Communist former U.S. senator), penned an Op-Ed in the New York Times titled "How Saddam Hussein Gave Us ISIS."

In the piece, peddling suspect historical analysis, Orton claimed Hussein's government morphed from the secular Arab nationalist ideology of Baathism into Sunni fundamentalism known as Salafism. He argued Hussein pursued a campaign of political Islamization in his country, "imposed a version of Shariah law" and "allied with Islamists, notably the Muslim Brotherhood." He also insisted that ISIS created "a Saddam Hussein-style authoritarian regime."

Liz Sly, the Beirut bureau chief of the Washington Post — which uncritically echoed lies from the Bush administration in the buildup to the Iraq War — published an article advancing a similar argument in April.

Others have done the same. The "Saddam created ISIS" thesis is popular among those who portrayed the U.S.-led invasion of Iraq as a benevolent act of humanitarian intervention, not an illegal war based upon lies and an act of aggression against a country that had absolutely nothing to do with al-Qaida or the Sept. 11 attacks.

Some scholars are not buying it, and have pushed back against the argument, which they say simply is not in accord with the facts. Samuel Helfont, a lecturer at the University of Pennsylvania and fellow at the Foreign Policy Research Institute, and Michael Brill, a graduate student at Georgetown University, published a thorough refutation of this thesis in Foreign Affairs on Jan. 12.

Helfont and Brill took a step most of the other pundits have not bothered taking: They actually dug through documents in the Iraqi archives and the Hoover Institution's Ba'ath Party Records archive.

What they found confirms what countless critics of the Iraq War, journalists, commentators and scholars have long argued, and what the former British prime minister confessed.

The notion that Hussein set the foundations for ISIS is "inaccurate and dangerously misleading," the scholars concluded, after sifting through the documents.

"Our rigorous study of those records has found no evidence that Saddam or his Baathist regime in Iraq displayed any sympathy for Islamism, Salafism, or Wahhabism," the scholars revealed. They say the documents make it "clear": Saddam Hussein opposed Islamic extremism.

Helfont and Brill criticized "proponents of the Islamization narrative," like Orton, and stressed that their thorough analysis shows that Hussein was "antagonistic toward" Salafism and Wahhabism, two forms of Sunni extremism his government treated as synonymous.

Saddam "made clear his general aversion to any form of Islamization of his regime, particularly in a landmark speech in 1996, in which he attacked Islamists and the 'two-faced' men of religion," the scholars said.

The "Baathi-Salafism" argument, the myth advanced by Orton that Iraq mutated from a Baathist state to an Islamist one, is "incorrect" and a "distraction," they concluded.

Their research also found that Hussein "was particularly critical of religious arguments that denied the need for Arab unity and instead called for Islamic unity." Not only did Saddam reject this ideology; he explicitly said "it is not permissible to be fooled by this ruse."

The scholars indicate that their findings correspond to those of other scholars, such as Joseph Sassoon and Aaron Faust.

Sassoon's research shows that, in 2001, just two years before the U.S. invasion, Hussein's government held a meeting "to discuss Wahhabism -- how to fight it and how to show that its teachings had nothing to do with real Islam."

Faust notes that, throughout the 1990s, the Iraqi Baathists, in fact, banned Islamists' books and removed Islamists from positions in mosques, schools and the military.

It is true that some former officials of Hussein's government joined ISIS, but Helfont and Brill point out, "This should not be surprising. Since 2003, former Baathists have joined a variety of insurgent groups, not just ISIS."

"They have shifted their loyalties over time according to the political climate -- basically to those they judged could successfully take power," the scholars added.

Helfont and Brill conclude their piece stressing that the U.S. war played an "essential role" in the spread of violent extremism throughout the country. They emphasize that, in order to defeat ISIS, "it is crucial to understand its real roots" as al-Qaida in Iraq, which fought the U.S. military during the war and renamed itself the Islamic State in Iraq in 2006.

The research conducted by Helfont and Brill should put an end to this mendacious myth once and for all. Moreover, it should inspire people everywhere to ignore the influence of warmongers. Many of the same pundits and policymakers today calling for more war and military intervention in Iraq are precisely the ones who propagated lies in support of the illegal invasion in the first place.

"ISIS is a monstrosity. There's not much doubt about that," legendary public intellectual Noam Chomsky said in a March interview. But "it didn't come from nowhere. It's one of the results of the U.S. hitting a very vulnerable society — Iraq —  with a sledgehammer, which elicited sectarian conflicts that had not existed."

"The U.S. violence made it worse," Chomsky added. "We're all familiar with the crimes. Out of this came lots of violent, murderous forces. ISIS is one." By continuing to pursue its militarist policies, the U.S. is only exacerbating the problem, he stressed.

These scholars' work conclusively shows just how fraudulent the arguments made by supporters of the Iraq War are, and points to the importance of acknowledging the horrific crimes the U.S. carried out in Iraq — and Western imperialism's responsibility for helping spawn the Middle East's bloodiest monster.