The Oscars' death spiral: The academy and Hollywood are locked in a crisis of their own making

Another super-white list of Oscar nominees, but the problem is less the academy than Hollywood's dominant ideology 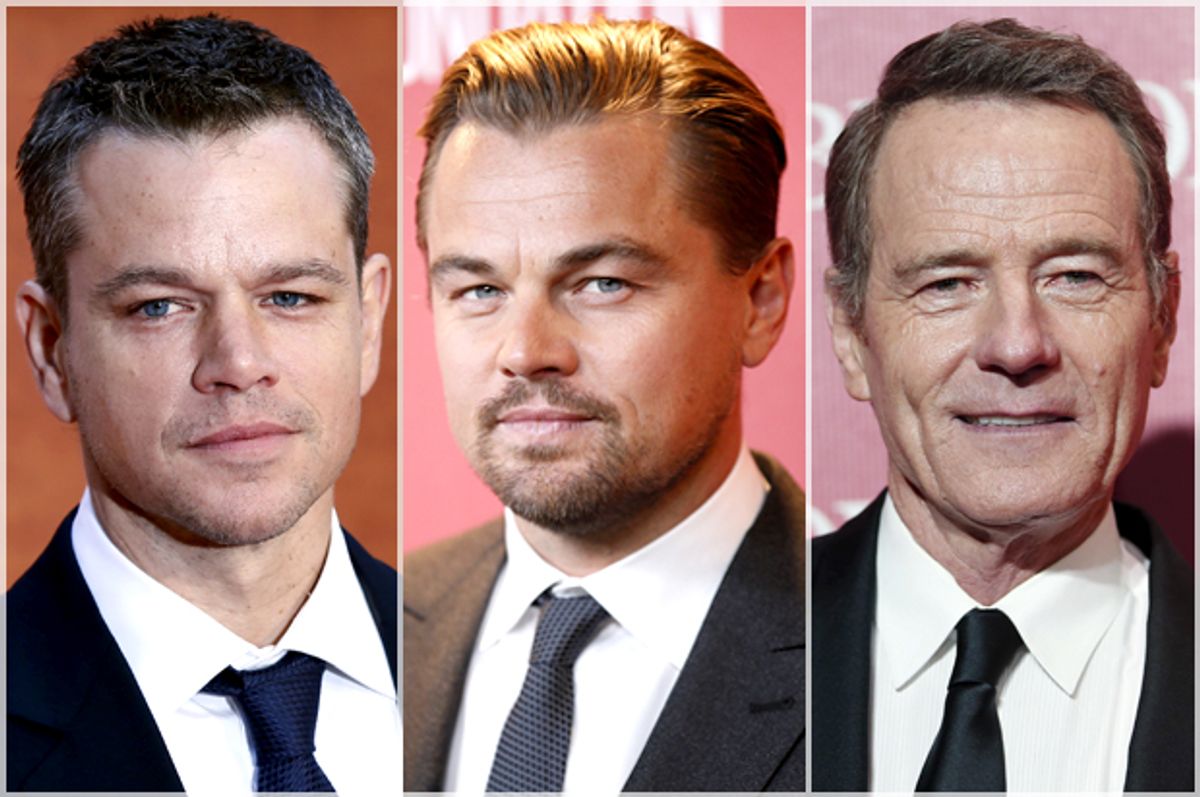 Whether Michael B. Jordan deserved an Oscar nomination as best actor for “Creed,” and whether F. Gary Gray deserved a best-director nomination for “Straight Outta Compton,” are subjective questions. My personal answer would be yes to the former and no to the latter. (I’m not dissing Gray in particular, but if Todd Haynes is not nominated for making one of the most beautiful films in recent American history, then Gray sure as hell isn’t either.) What is indisputable, however, is that the Academy of Motion Picture Arts and Sciences has managed to stab itself in the head, for the second straight year, and come off once again as a bunch of out-of-touch old white guys. Don’t think that academy members are unaware of this, or do not realize it’s a problem. They just don’t know what the hell to do about it.

From the point of view of the academy’s leadership, this pretty much presents an insoluble dilemma. Seriously, what are they supposed to do, beyond putting up with all the outraged blog posts and #OscarsSoWhite tweets and pushing onward for another year? Can they kick out all the stereotypical retired bit-part actors and movie executives in Beverly Hills, with their stereotypical sky-blue cardigans and white patent-leather shoes? Or send them all anthrax in the mail with their holiday-season screeners? They cannot. Can they rig the nomination process, or set up some informal quota system to ensure that at least one or two people of color show up in the acting and directing categories? Well, I suppose they could, and I wouldn’t be surprised if such things have been brainstormed in private. But consider all the ways that could go wrong — if Bill O’Reilly and Rush Limbaugh heard about it, for instance.

Barring such drastic measures, the academy is pretty much stuck with the membership it has, which is gradually growing younger and more diverse, but remains predominantly just the way you would think. Far more important, it’s also stuck with the production process of the Hollywood studios and “prestige” indie producers like Harvey Weinstein and Scott Rudin, which privileges certain kinds of movies, certain kinds of stories and certain kinds of characters over others. That’s where the heart of the problem lies, which is why I think it’s slightly misguided to point fingers and shriek at Mr. Sky-Blue Cardigan. Yes, to the extent Mr. SBC exists, he doesn’t get off the hook. (He didn’t nominate Ava DuVernay last year for "Selma," the most Oscar-y movie imaginable.) But it should not come as an enormous surprise to learn that Oscar voters have safe and conservative tastes in many ways, or that they favor period pieces, inspirational fables and do-gooder tales, all wrapped in that indefinable quality best described as movie-ness.

Thursday should have been a relatively noncontroversial day in Oscar history. Of course there was the immediate drive to root out the most glaring omissions and the thematic talking points: For me, the fact that “Carol” received nominations for both its leading actresses along with its screenplay and cinematography, but not for best picture or best director, is nearly inexplicable. But for the most part, the surprises were small and nourishing ones. If “Spotlight” probably remains the best-picture front-runner, you can make a plausible case for a bunch of different movies in that category: “The Revenant” has opened strongly, and is likely to win Leonardo DiCaprio his long-awaited statuette; “Mad Max: Fury Road” or “The Martian” could offer the academy the chance to give its biggest prize to a hit genre movie from a major studio, after years of mid-budget indie dominance.

As various wags have already noted, “The Martian” and “The Revenant” are effectively the same story, on different planets: White dude left behind but will not die! (I say that having immensely enjoyed “The Martian,” perhaps infected by my 11-year-old son, who loved it more than life itself.) But it’s not like the best-picture nominees are bad films; in a clear break with recent Oscar history, there are no ludicrous or embarrassing entries on the list. (I don’t love “Room,” to be honest. It felt like well-crafted TV melodrama. But the acting is terrific and I know that many people were deeply moved.)

And while the glaring whiteness of the acting categories has trumped any initial discussion of the 20 nominees and their qualities, there are no disgraceful choices amid that group either. Would I personally have bumped Bryan Cranston (as the eponymous blacklisted screenwriter of “Trumbo”) or Eddie Redmayne (as the eponymous transgender pioneer of “The Danish Girl”) in favor of Michael B. Jordan? Sure, yeah, probably. But the story of Dalton Trumbo plays directly to Hollywood’s sense of its own history, and it’s already clear that Redmayne’s boarding-school accent and androgynous star power makes the academy swoon. DiCaprio, Matt Damon (for “The Martian”) and Michael Fassbender (for “Steve Jobs”) were pretty much foregone conclusions.

I’m pretty sure Jennifer Lawrence could have survived the year without yet another nomination (for “Joy,” by far the least of her films with David O. Russell and Bradley Cooper), but at this point J-Law has become an academy reflex action, the down-home Americana cognate to Redmayne. As for the best-actress nomination for 69-year-old Anglo-French legend Charlotte Rampling, for her delicate and magnificent performance in the wrenching British marriage drama “45 Years,” I wouldn’t give that one back for anything. In a film and TV career that began in 1965, it’s Rampling’s first Oscar nod. I suppose the winner in that category will either be Saoirse Ronan (as a 1950s Irish immigrant in “Brooklyn”) or Brie Larson (as the kidnap survivor of “Room”).

My point is that you can continue to pick away at the list of nominees if you want to — do Tom Hardy (“The Revenant”) and Christian Bale (“The Big Short”) deserve supporting nominations? Sure they do! Does Jennifer Jason Leigh, for “The Hateful Eight”? I disliked that movie so intensely, in the end, that I can’t tell. But the #OscarsSoWhite problem is not actually about who got nominated for Tinseltown’s biggest awards. In broad strokes, this was a really good year for movies, and Thursday’s nominees offer a wide range of talented people and interesting performances. Given that by “wide range” I mean a bunch of white folks.

As I suggested earlier, the problem is first of all what movies get made, and under what circumstances. Secondarily but just as important, it’s about how those movies are positioned and marketed. It remains true that only a few mainstream big-budget pictures with leading roles for actors of color are made every year, and fewer still are produced or directed by black or Latino filmmakers. On the surface that seems deeply strange, since it is well understood in Hollywood that Latino and African-American audiences are loyal moviegoers, in disproportionate numbers. But the marketing stereotype holds that while audiences of color will often see films with white protagonists, the reverse is far less likely to be true. (As in so many other areas, TV drama is well ahead on this question. Does anyone think that only black people watch Shonda Rhimes' shows?)

To take the proximate cases of 2015, “Straight Outta Compton” and “Creed” were not conceived as awards movies (unlike DuVernay’s “Selma” the previous year, which was perhaps too consciously crafted as Oscar bait). I don’t know if Hollywood marketers still talk about the “urban demographic,” but such was the target for those films: A few weeks in the densely clustered multiplexes in and around big cities, a big payday, everyone goes home happy. In fact, the same strategy applied to “Southpaw,” another compelling boxing drama of 2015 that was not nominated, which had a black director (Antoine Fuqua) and a white star (Jake Gyllenhaal). The idea of pushing those three films as Oscar contenders came up late, almost as an afterthought, and was tinged all along with existential doubt: Well, you know what kinds of movies those are. They’re about making money. They’re about other people. They are, in other words, implicit works of condescension.

I can’t blame anyone who assumes that the lily-white character of the Oscar nominations reflects deep-seated prejudice or racism within the academy. I also don’t entirely blame academy members who fling up their hands and say: “What can we do? We’re prisoners of the system!” This entire phenomenon reflects an even deeper issue, that being the Hollywood establishment’s increasing disconnection from the changing character of American society and the shifting appetites of pop culture. I wouldn't exactly argue that "Star Wars: The Force Awakens" deserved or required a best picture nomination, but what's striking is that absolutely no one is surprised that -- like "The Avengers" and the "Dark Knight" movies and every Michael Bay picture -- it didn't get one.

Many people in and around the movie business don’t actually like the movies they make, especially the ones that are the most popular. This process of disconnection, decline or implosion is leading, very slowly, toward a crisis with unknown consequences. The Oscars, with their desperate struggle to appear relevant, their burble of ersatz or inherited pseudo-glamour and their counterintuitive, counter-commercial list of nominees, play out that deepening Hollywood crisis as an annual public drama.