Dr. Ruth loves happy endings: “Most people want to be in a relationship, and not just have a one-night encounter"

Salon talks to the legendary sex therapist about "50 Shades," social media and her return to TV with "Original Sin" 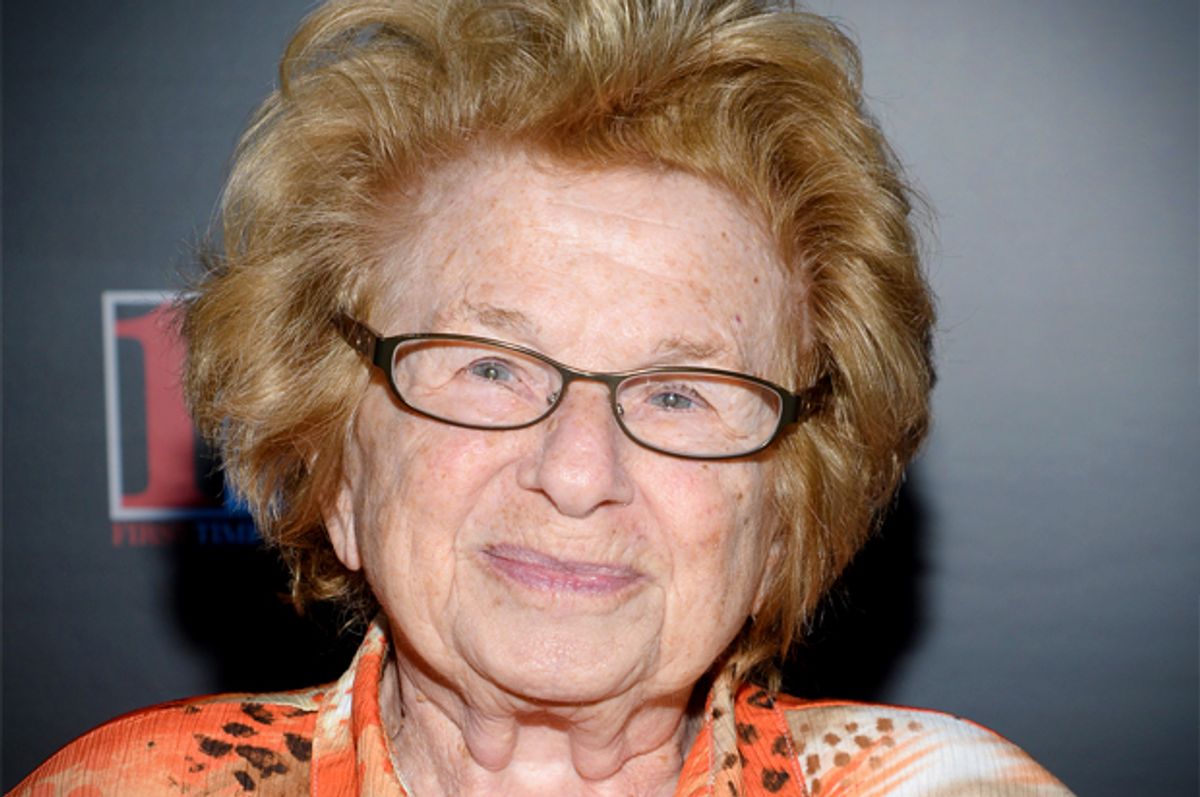 Once upon a time, the most explicit sex acts people saw on broadcast television were brought to us in National Geographic documentaries about, say, the mating of the wildebeest.

Today, entire blocks on home shopping channels are devoted to selling sex toys. Affairs can be initiated and managed on websites. Finding a sex partner can be as easy as downloading an app to your phone, creating a profile and swipe, swipe, swiping a screen.

In spite of all these innovations, we can still benefit from the wisdom and advice of the 87-year-old Dr. Ruth Westheimer. The 4-foot-7 sex therapist brought sexuality out of the dark and onto radio airwaves with her 1980s-era radio program "Sexually Speaking," which spawned a Lifetime TV show that debuted in 1984. Her popularity gave rise to a slew of other shows fueled by frank talk about sex in the years that followed, including MTV’s “Loveline” with Dr. Drew Pinsky and Adam Carolla (which was also a radio show), “Talk Sex With Sue Johanson” on Oxygen and more recently, TLC’s “All About Sex.”

This year Dr. Ruth returns to TV in the upcoming series currently titled “Original Sin: How Sex Changed the World,” which will examine how much more visible and impactful sex has become in modern times.

“Original Sin” is in pre-production, and it isn’t the only new show about sex bowing this year. On Comedy Central’s “Not Safe With Nikki Glaser,” debuting on Feb. 9, self-described “curious perv” Glaser dissects modern mating rituals such as the sharing of dick pics, subcultures and unconventional turn-ons.

Glaser enthusiastically credits Dr. Ruth for “Not Safe’s” existence. “She was like the Joan Rivers of sex to me,” Glaser said following a recent press conference for her show. “She was doing something that no one is even doing now. She was that far ahead!”

As for how this revolutionary sees today’s treatment of sexuality, “I hope she’s a little bit inspired by some of it, but I think that misogyny is kind of taking hold again,” Glaser observed. “Selfies, sending sex pics, and how sexualized young girls are… I hope Dr. Ruth’s [view] is hopeful, but I have feeling she’s got some bones to pick.”

You’d be surprised. Then again, some of the responses she shared in an interview conducted following National Geographic’s announcement about “Original Sin” are pretty much what one would expect for a woman who proudly describes herself as “square” and “old-fashioned.”

Dr. Ruth also is very entertaining and endlessly entertained by the world around her, as her signature titter indicates. “That a channel like National Geographic, a place where I think about animals having sex, is now willing to do a program about human sexuality -- for the ratings, no question! – I think this is a welcome step in the right direction,” she said.

It’s been quite a while since you’ve been a series regular on television, hasn’t it?

Let's talk about modern views of sexuality, contrasting how you’ve presented it in your career versus how it’s presented in culture today. Going all the way back to your radio show "Sexually Speaking," you were always so precise and honest about how joyful sex and sensuality are.

That’s always been very true. And I was also very clear that when I didn’t know the answers, I’d say, I don’t know. I had a wonderful run of 10 years, of every Sunday night. It was listened to every Sunday in New York, across the country, and in Canada.

…Now I’m teaching, at the age of 87, at Columbia University’s Teachers College. I do have a Twitter [account] with 87,000 people, but I’m not computer literate. I talk and Pierre Lehu, who I’ve worked with for 35 years, puts it on the Twitter.

I’m all over in that medium of you young people! On the one hand, I welcome it. On the other hand, I also have some worries that not enough is being talked about [in terms of] being in relationships. So on the series, I’m going to talk about that I’m old-fashioned and a square. I believe that most people want to be in a relationship, and not just have a one-night encounter. I will shout that from the rooftops, of your website and anyplace else where I can talk about that.

That seems to be a big change from when you first started doing the radio show and then the shows with Lifetime, and now Nat Geo. There have been a lot of shows featuring frank talk about sex on TV since then. But what you did was much more focused on presenting specific guidance about sex and the human body, and how sex fits into human relationships.

That’s what a sex therapist does. I come across as the old-fashioned but very well-trained and well-educated sex therapist that I am. Which I think in this series will come out very well. It will make people think that whatever is presented on the social media, that that is not the reality of life… People should be sexually literate. People should know what it is that pleases the other partner. I know that women, for example, have heard the message that I’ve been saying, that the woman has to take the responsibility for their sexual satisfaction. She can’t just say, “Oh, he loves me, so he ought to know."

…And it’s particularly important, for young people today, to know that sexually transmitted disease is something that still worries me. It worries me about AIDS, because I lived through that period. Young people today have never seen an AIDS patient. So they think they don’t have to worry anymore. And that’s not so.

We have a culture now in which finding sexual partners is easier than ever, thanks to dating apps and dating sites. And yet it seems that it’s more difficult to find a relationship without the assistance of one of these services.

That’s why I’m saying everybody should use social media in order to connect to somebody, but then they also have to use their brains… There’s no question that there’s been a change in our society. Look at how advanced that we’ve become. But it has some danger, this advancement. Because I don’t want people to walk around and ask each other, at the first encounter, "How’s your sex life?" I don’t want people necessarily to write it on the social media. That fine line of privacy has to be preserved. And right now that’s not happening.

TMI. Too much information.

Too much information is absolutely a problem. Because, first of all, I don’t want a couple, if they meet, to right away say who their partners were before or what they exactly did. There has to be that little bit of privacy and discovery in terms of the relationship.

Understandable, but this is a concerning issue. There was even a famous Ted Talk about it, and the fact that there’s a lot of misinformation being perpetuated about sex and sensuality. Like…choking has become a thing.

I don’t want to hear about that. But I will tell you something. "Fifty Shades of Grey." Of course I read it. Not required literature, but it made a point that I’ve been making for all of these years: Women get aroused by sexually explicit material, whether in books or movies. "Lady Chatterley’s Lover," "The Fear of Flying," I say to women, “Read it.” But if there are passages you don’t like, turn the page. Not required reading! But it can be made a point about knowing that women do want to have a relationship.

[Anastasia] Steele is in a relationship. She’s 18, she’s not underage. And she’s in love with this wealthy Christian – hee-hee-hee! – but part of the pages, I turned the page because the sadomasochism is not for me. But what I love the most is the happy ending. That’s typical for old Westheimer!