Stephen Colbert’s radical vulnerability: Talking frankly about race could be a game-changer for his moderate white audience 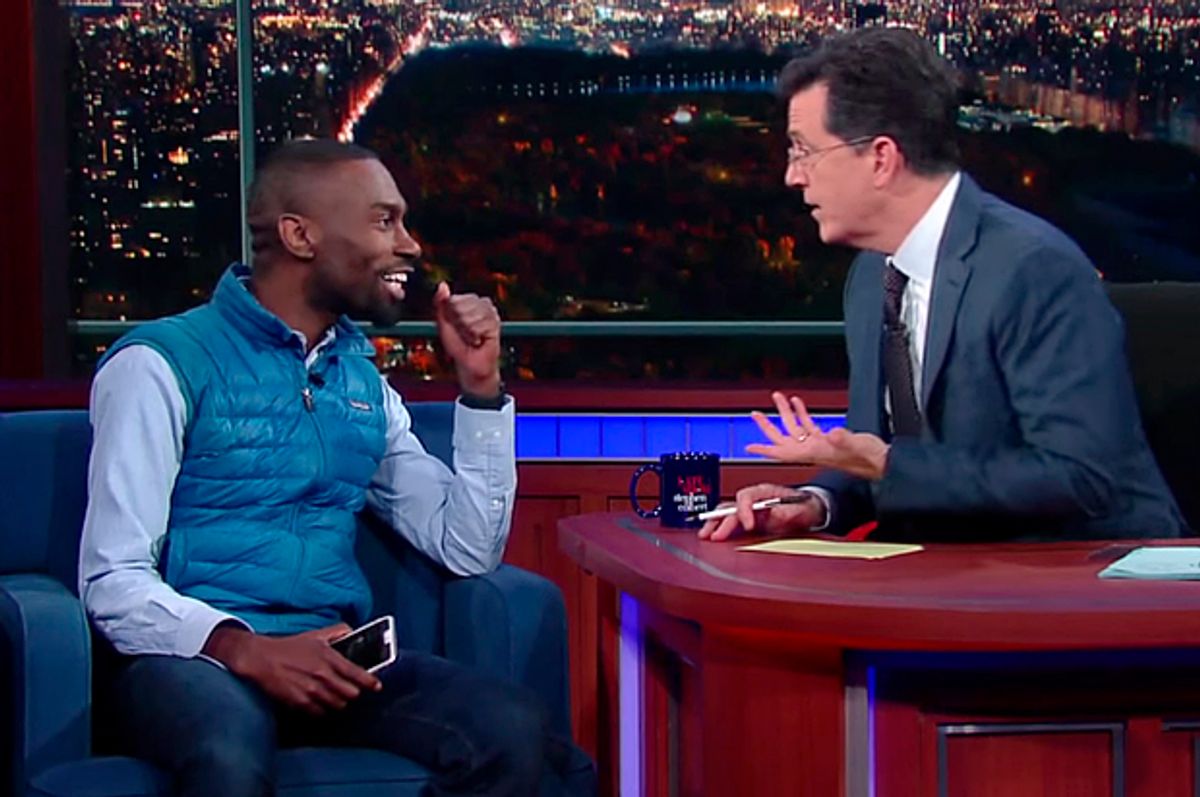 Last night, “The Late Show With Stephen Colbert” invited on activist DeRay McKesson to discuss the current state of the civil rights movement on Martin Luther King, Jr. Day. McKesson was host Stephen Colbert’s third guest, after actress Patricia Heaton and musician Quincy Jones; he was kind of buried into the lineup, after the celebrity headliners but before the musical guest. But for regular Twitter users, McKesson—@deray—is his own brand of celebrity; the activist has over 276,000 followers on Twitter, and as Colbert noted, is one of 10 people followed by Beyoncé.

McKesson got to that level of popularity by being an instrumental online supporter and organizer of the Black Lives Matter movement, which hopes to bring awareness and action to institutional racism against black people, specifically when it comes to police action. This became the center of national attention in the summer of 2014, following the controversial flashpoint of the shooting of Michael Brown in Ferguson, Missouri. The case brought renewed attention to the plight of vulnerable black targets at the hands of the police; in the past year, names like Sandra Bland, Tamir Rice, Freddie Gray, and Laquan McDonald have raised serious, unanswered questions about what happens to black lives when they are remanded to police custody. McKesson has been at the center of that—on the ground at the site of protests in Ferguson and Baltimore, and present for the aftermath of the massacre in Charleston, South Carolina. That level of involvement prompted both Hillary Clinton and Bernie Sanders to meet with McKesson and his fellow activists with #CampaignZero. Both presidential candidates were presented with policy initiatives to end police violence.

On Colbert’s show last night, this man briefly got to add “talk show host” to his long list of accomplishments.

In the months since Colbert has taken what was once David Letterman’s seat—and has evolved out of his put-on hyper-conservative agenda towards a more authentic persona—he has struggled, I think, to strike the right note of political engagement. It’s an understandable struggle. Politics clearly matters a great deal to Colbert, but there’s a certain amount of flexibility—and plausible deniability—as a comic performer that isn’t quite available as a late-night host. Much like a politician, Colbert is very aware of the average American’s response to politics; unlike a politician, though, Colbert doesn’t pander. Much like the ethos of his friend and former coworker Jon Stewart, Colbert’s angle is always to make the average person see reason. This sometimes puts him in sticky situations—especially from his liberal base, who has been busy seeing reason for some time now, thank you—but his interview with McKesson is a nice reminder of why Colbert resonates as the “Late Show” host.

And it’s precisely because Colbert is the establishment, but wants to do better. There is no magical hand-waving that gets around the fact that despite being a wacky sketch comedian mostly famous for being a (fake) reactionary politician who ran a (real) campaign for president, Stephen Colbert is a straight white guy from South Carolina. He might be politically liberal, but he’s not a liberal choice for a talk-show host, in a landscape that is dominated by—as that Vanity Fair cover reminded us—comedians who look just like him.

I surmise that for Colbert’s interview with McKesson, the comedian was playing even more establishment than usual, in an attempt to bring in the members of the audience who might be alienated by a black activist on their safe late-night entertainment. There was something a bit maddening about Colbert asking McKesson to define “white privilege”—is there anything more inherently “white privilege” than that question, especially when asked to an overqualified activist whose whole life is dedicated to combating white privilege?—and Colbert revived the question about “All Lives Matter,” the counter-movement, of sorts, to “Black Lives Matter.” To the hip and savvy liberal viewer, it felt a bit like rehashing much-discussed, already shelved topics. But I think Colbert was deliberately trying to draw in the moderate, defensive, and possibly confused listener; it’s hard to say, the morning after, if this kind of handholding through the issues worked for his audience, but it certainly is more good-faith bipartisan work than occurs most days in Washington.

And perhaps most crucially, Colbert allowed himself to be wrong, to be vulnerable, to be, even, the bad guy. About six minutes into the eight-minute interview, Colbert and McKesson switched seats, as part of Colbert acknowledging that having a show, and sitting behind that desk, wields a certain kind of advantage. That seemed planned to my eye, but what was less planned was Colbert’s obvious discomfort at not being in his element, as he had to get used to looking at the cameras from a different angle and from looking over the desk to the guy in charge. McKesson’s first question from behind the desk asked Colbert how he intended to dismantle his own white privilege, now that he understood it. And in that moment, Colbert articulated a vulnerability that I think a lot of white Americans are afraid to cop to without resorting to anger or defensiveness: “I don’t know if I do understand [white privilege]. I can acknowledge it, but I don’t know if I understand what I can do to dismantle white privilege.” McKesson observed that Colbert has a platform and a fortune that he could mobilize; Colbert responded, with a response so straight-faced it went beyond deadpan: “You can’t have my money… And you can’t have my show.”

McKesson changed tactics. “Why do you think white people are uncomfortable talking about race?”

Colbert responded: “I can’t speak for other white people. I feel guilty for anyone who does not have the things I have. That includes black people or anyone, because I am so blessed — I think there’s always a fear that it will be taken from me.”

McKesson responded, with fully engaged sincerity: “What can you do to manage that guilt?”

And in what might be the most glorious cop-out in the history of television, Colbert joked, “I drink a fair amount,” before shifting in his seat uncomfortably, rebuttoning his blazer, and muttering, “I don’t know, I’m shooting from the hip here.” Colbert then looked at the camera for help, and perhaps sensing a chance to wrap things up, he deflected. “I had you on the show, does that help?”

It’s all there: discomfort, guilt, entitlement, and by the end, confusion. Colbert is the stubborn status quo, both trying to understand and disinterested in understanding past a certain point. This is the value of an immersive sketch comedian running one of America’s biggest late-night talk shows; he’s never afraid to make himself sit in the hot seat.