"Nudity will never be passé": Penthouse, counter to reports, has no plans to stop publishing in print 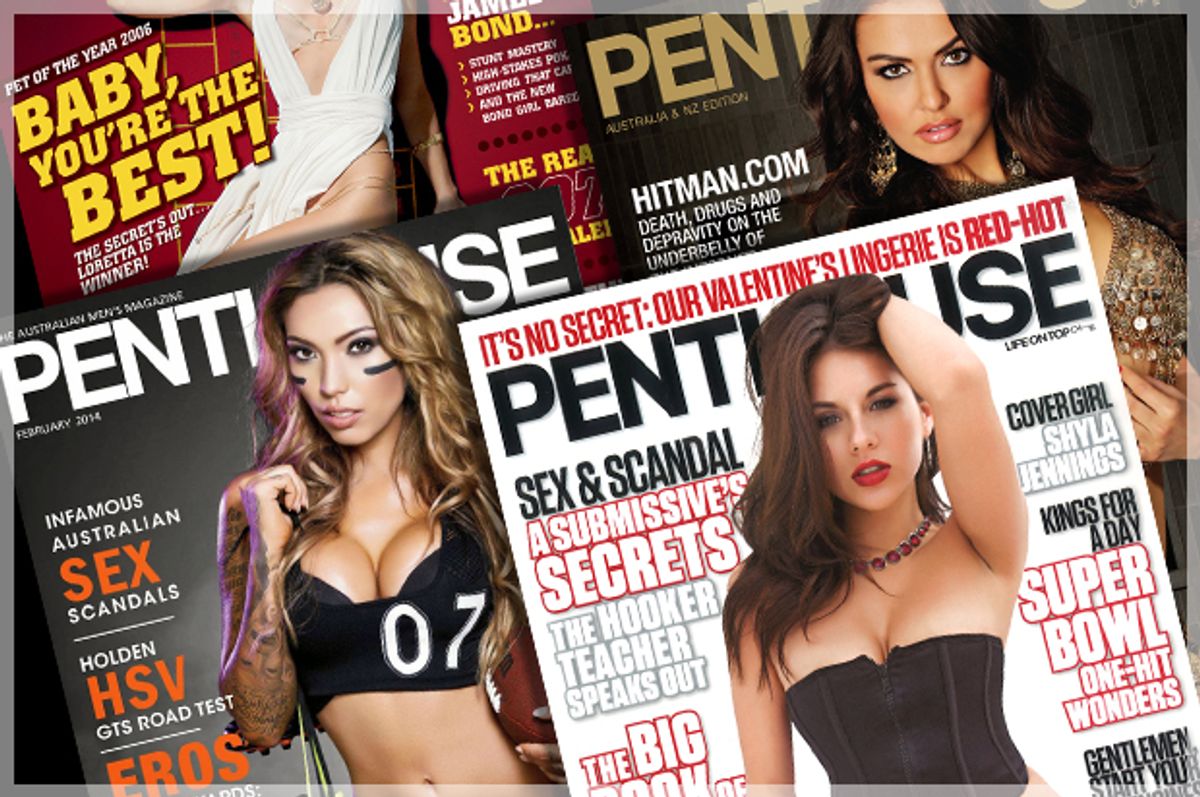 Contrary to a Friday report by CNBC, picked up by numerous other media outlets, Penthouse is not shutting down its print magazine. According to Kelly Holland, Penthouse Managing Director, in an interview Tuesday with Salon, while the magazine is launching a digital edition, that will be a companion to, not a replacement for, its print publication. (Full disclosure: the author is a former Contributing Editor at Penthouse.)

Holland said the early reports stemmed from a misreading of a press release by General Media Communications, Inc., a subsidiary of FriendFinder Networks Inc., which owns Penthouse, issued Friday announcing the launch of the digital edition. The press release — the banner headline read "PENTHOUSE MAGAZINE GOES DIGITAL! — confirmed that the company’s editorial offices have moved from New York to Los Angeles, and read in part, “Reimagined for the preferred consumption of content today by consumers, the digital version of Penthouse Magazine will combine and convert everything readers know and love about the print magazine experience to the power of a digital experience—giving people an open-ended reading experience, available anytime, anywhere.”

While the press release did not specifically state anything about the status of the print magazine, the conclusion that the print magazine would be closing was perhaps a natural one, given the all-caps "goes digital" headline, in an age where even 80-year-old publications like Newsweek have gone digital. “All we were saying is we’re going digital; we’re moving operations to Los Angeles for strategic reasons,” said Holland, calling it a “cost cutting maneuver” that also made sense for production reasons. “We want to bring print publishing up into the same office where we do broadcast and licensing because we are working very hard to maintain a singular, laser focused, strategic brand message and we feel by bringing all those business units together, we can do that in a more coherent way. We are not taking the print publication off the newsstand at all.” Holland said they were wrapping up their March issue and about to start work on April’s print edition. She expects the digital edition to launch in either late February or early March, although there is no firm launch date.

Holland cited the magazine’s longtime commitment to covering veterans’ issues as one the digital edition will continue to pursue. “Veterans and people in the military are a core demographic that make up our subscriber and our fan base,” she said.

Holland made it clear that they want to counter the approach of Playboy, which last year announced that it would be dropping nude images from its magazine, with Playboy CEO Scott Flanders telling The New York Times, “You’re now one click away from every sex act imaginable for free. And so it’s just passé at this juncture.”

According to Holland, “Nudity will never be passé. Nudity is delivered in a million forms and it’s about how you do it. We believe that we do it brilliantly, and our peers have done it really well, but the fact that they have taken their position based on what the internet is doing does not resonate with me.”

Of the need to expand its online offerings, Holland said, “We feel the same pinch that everyone else feels,” specifically citing the closing of bookstore chain Borders and that the magazine, along with other adult titles, were banned from Army and Air Force Exchanges (PX) in 2013.

“You have people who only get their news in a digital space and we have to address that. We have to be resonant in a millennial world. We have to be digital to do that. We have not done it, so being that Penthouse is part of a technology company, it’s about time,” said Holland.

Of the launch of a digital edition, Denise Kraft, CEO of publicity and marketing firm Naughty PR, which focuses on the adult industry, said it’s a smart and timely move for the brand. “For advertisers, digital offers consumers instant additional information with a simple click; it's an opportunity not only for consumers to be more engaged but for advertisers to reach a wider audience with a unique ability to analyze demographics and effectiveness than ever before,” Kraft told Salon. “This is timely, since, according to Kraft, “with Playboy essentially turning its back on what defined them, it's left a hole in the products that bridge the gap between erotic and mainstream entertainment.”