Hide your kids from Carly Fiorina: Luring unsuspecting tots into a lurid anti-abortion rally is a new campaign low 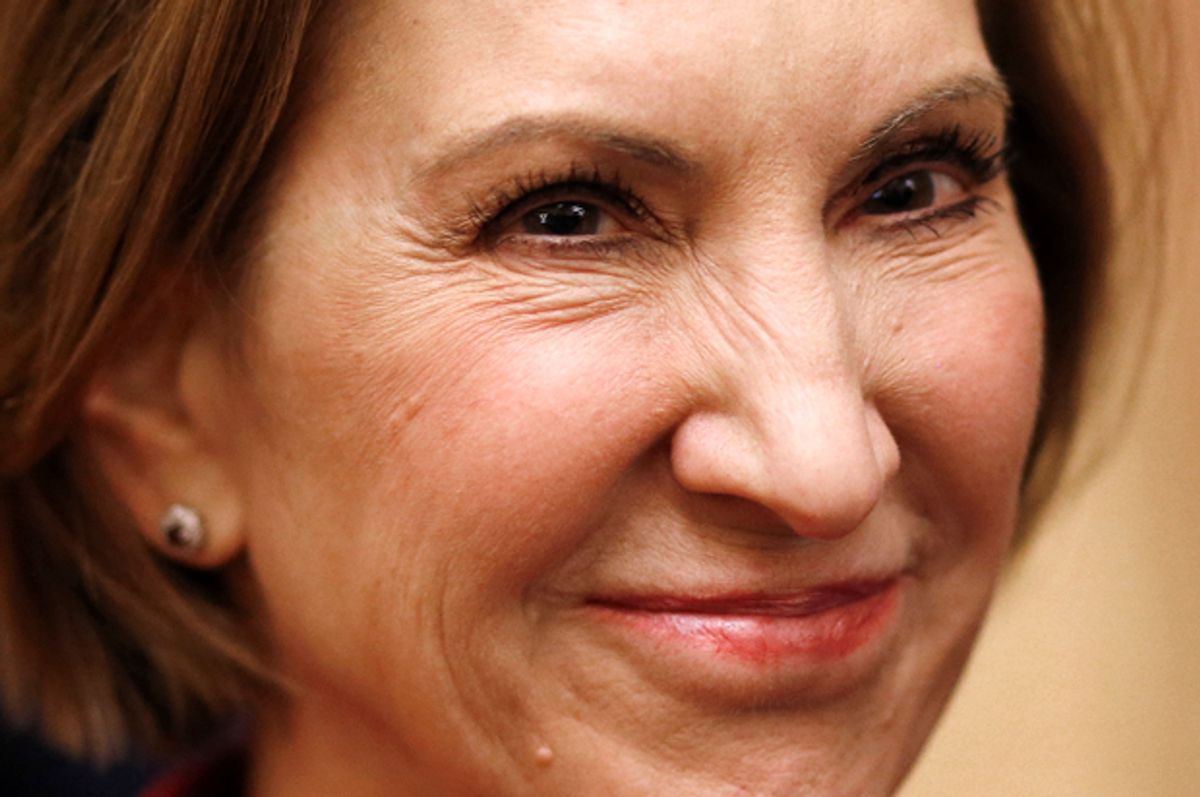 I don't want to tell you how to run your campaign into the ground, Carly Fiorina, but reportedly "ambushing" a group of preschoolers was certainly a nice touch.

In a move we can only imagine some poor school chaperone is currently getting righteously chewed out for, the woman who will never ever become president of the United States reportedly turned an unsuspecting group of schoolchildren into her props for a right to life forum at the Greater Des Moines botanical garden this week. Some of the children's parents say they never signed off on the event.

On Wednesday, Fiorina tweeted that "Some special guests took a break from the snow to join me on a walk through the Greater Des Moines Botanical Garden," posting a short video showing her leading a group of young children through the facility. As the Guardian reports, Fiorina then "directed around 15 young children towards a makeshift stage" — right in front of a photo of a fetus and a poster for Iowa Right to Life — and then proceeded to discuss "harvesting organs from aborted babies" (btw that's not a thing) with the 60 or so gathered supporters. At one point, an anti-abortion activist brought up a scale model of a fetus and told the audience, "This is the face of abortion." Well, I'm sure the kids were enchanted.

Earlier on Thursday, the Des Moines Register ran a favorable story about Fiorina's activities of the day, reporting that "The former CEO of Hewlett-Packard was right on time for her speech at the Iowa Right to Life Presidential Forum, but she stopped and bent down to answer the youngsters’ questions about flora and fauna. With her aides getting antsy, Fiorina attempted to say goodbye, but the kids decided they’d rather follow. 'We’re being told to sit down and be quiet about our God, about our guns and about the sanctity of life,' Fiorina said with the children forming a semi-circle around her."

But that's not quite how some parents see how it went down. Chris Beck, the father of a four year-old who was on the trip, told the Guardian, "The kids went there to see the plants. She ambushed my son’s field trip." He said he first learned of Fiorina's involvement with the school trip when a childcare provider told him about it after the fact. He added, "Taking them into a pro-life/abortion discussion [was] very poor taste and judgment. I would not want my four-year-old going to that forum – he can’t fully comprehend that stuff. He likes dinosaurs, Teenage Mutant Ninja Turtles and Transformers."

But a Fiorina spokesperson told the Guardian, "We were happy that these children chose to come to Carly’s event with their adult supervisor." And in a statement, Carly for President Deputy Campaign Manager Sarah Isgur Flores said, "In Des Moines yesterday, a group of preschoolers along with their parents and teachers followed Carly right into the event she was speaking at for Iowa Right to Life. Earlier, she’d run into the kids in the Botanical Gardens and watched the koi with them for a while. I guess the kids must have thought she was pretty neat because then their teachers and parents and the kids all followed Carly into the event complete with Carly stickers. So to all the left wingers who think they found their big scoop  —  Carly Loves Kids! Carly is Pro Life! "

That's awesome for you, Carly. But as a parent, I have to say that I would go medieval if my children had ever been exploited in that way. It's not appropriate to use kids at a political event without their parents' consent, period, and it is way, way not okay to use them at an event specifically to promote a single issue that many people feel strongly about and most young children are not prepared to comprehend. It's a tacky gambit that, ironically, completely steamrolls over the rights and wishes of the parents and the children this ridiculous movement pretends to give a crap about. But I guess you could say this is just the face of conservatism.