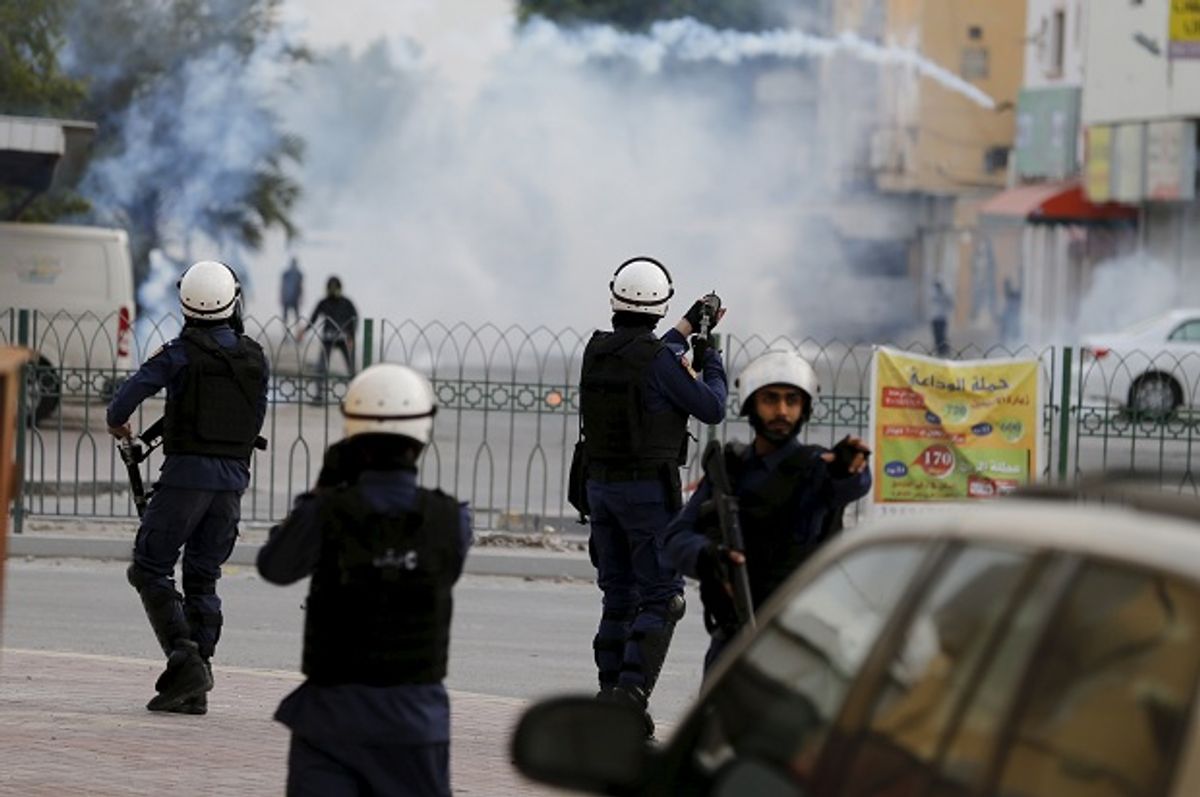 Autocratic Gulf monarchies are paying the British government millions of dollars to train military officers, who are notorious for violently cracking down on all forms of dissent.

Saudi Arabia, the United Arab Emirates, Bahrain, Qatar, Oman and Kuwait have scores of cadets in the academy.

In these oil-rich, Western-backed Gulf regimes, peaceful protesters are regularly imprisoned for speaking out against the monarchy. Some are even sentenced to death in what human rights organizations say are unfair trials. Amnesty International blasted this practice in Saudi Arabia as "a monstrous and irreversible injustice."

Since 2006, the Royal Military Academy has provided taxpayer-subsidized training to 843 foreign officers, the Mirror reported.

This military collusion can be seen in Yemen, where, for more than 300 days, a Saudi-led coalition comprised of these Gulf monarchies, armed by the U.S. and U.K., has carried out a brutal war on the poorest country in the Middle East. American and British military officials are in the command and control center for the Saudi airstrikes. The Western officers have access to Saudi lists of targets, and have trained Saudi bombers.

In recent years, the number of military officers trained at the academy has increased.

Ten officers from the UAE are being trained at the Royal Military Academy, for $742,000. In the past 10 years, 82 Emirati cadets have been trained.

Oman, which is an absolute monarchy, is paying $499,000 for nine cadets to be trained, up from six last year.

Eleven cadets from Qatar are being trained, for $373,000, up from three in 2015. Together, more than 100 cadets from Oman and Qatar were trained at Sandhurst in the past decade.

The Saudi absolute monarchy has three cadets being trained, at a cost of $77,000, up from zero last year. 22 Saudi cadets have been trained in the past decade.

Two cadets from Kuwait are being trained this year, for $4,300.

In the wake of the so-called Arab Spring uprisings in 2011, the Guardian reports that Gulf dictatorships have sent more and more military officers to be trained in the U.K.

Bahrain violently repressed protests by largely peaceful activists in 2011. Saudi Arabia and the UAE sent thousands of soldiers into the tiny neighboring country to crush the demonstrations. At the time, leading U.S. media outlets like The New York Times referred to Bahrainis' protests against authoritarianism and anti-Shia discrimination as "unrest." American media coverage depicted the violent military intervention by allied foreign countries in a positive light, while portraying the demonstrations against autocracy and sectarianism as a product of supposed Iranian encroachment.

Saudi Arabia has faced increasing international condemnation in recent weeks. It kicked off the new year with mass executions of 47 people, including renowned Saudi activist Sheikh Nimr al-Nimr, who was a leader in the kingdom's Shia religious minority community.

While the Saudi regime is a close Western ally, it is a leading exporter of Islamic extremism throughout the world. Top secret U.S. government cables released by WikiLeaks admit that "Donors in Saudi Arabia constitute the most significant source of funding to Sunni terrorist groups worldwide," and that "Saudi Arabia remains a critical financial support base for al-Qa'ida, the Taliban, LeT, and other terrorist groups."

Protesters have called on the U.K. to cease training the "Sandhurst sheikhs." Tim Farron, the leader of the U.K.'s Liberal Democrats, blasted the government for its collusion with Middle Eastern dictatorships.

"These Sandhurst sheikhs are sitting in our military academies, learning from our best and then taking these things back to regimes that repress their population and trample all over human rights," Farron said, according to The Guardian. "People will look at this and think why are we selling weapons to Saudi, training Bahrainis and then sitting there while they oppress their population."

The Gulf is the most oil-dense region of the planet. In addition to their close economic ties with Western countries, Gulf monarchies regularly coordinate with the American and British militaries, and have bought hundreds of billions of dollars worth of weapons in the past several years.

In a speech in Bahrain on Oct. 31, 2015, U.S. Deputy Secretary of State Antony Blinken said "Our engagement today is grounded by our deep and enduring commitment to the Middle East and to its people. This region is home to some of our oldest and closest friends and allies."

"The region’s oil supplies have powered industries and economies for generations since the Gulf prospectors first struck oil in Bahrain in 1931," Blinken continued. "And while we are now more energy sufficient, Middle East oil continues to drive the global market, and we remain determined to secure its supply."