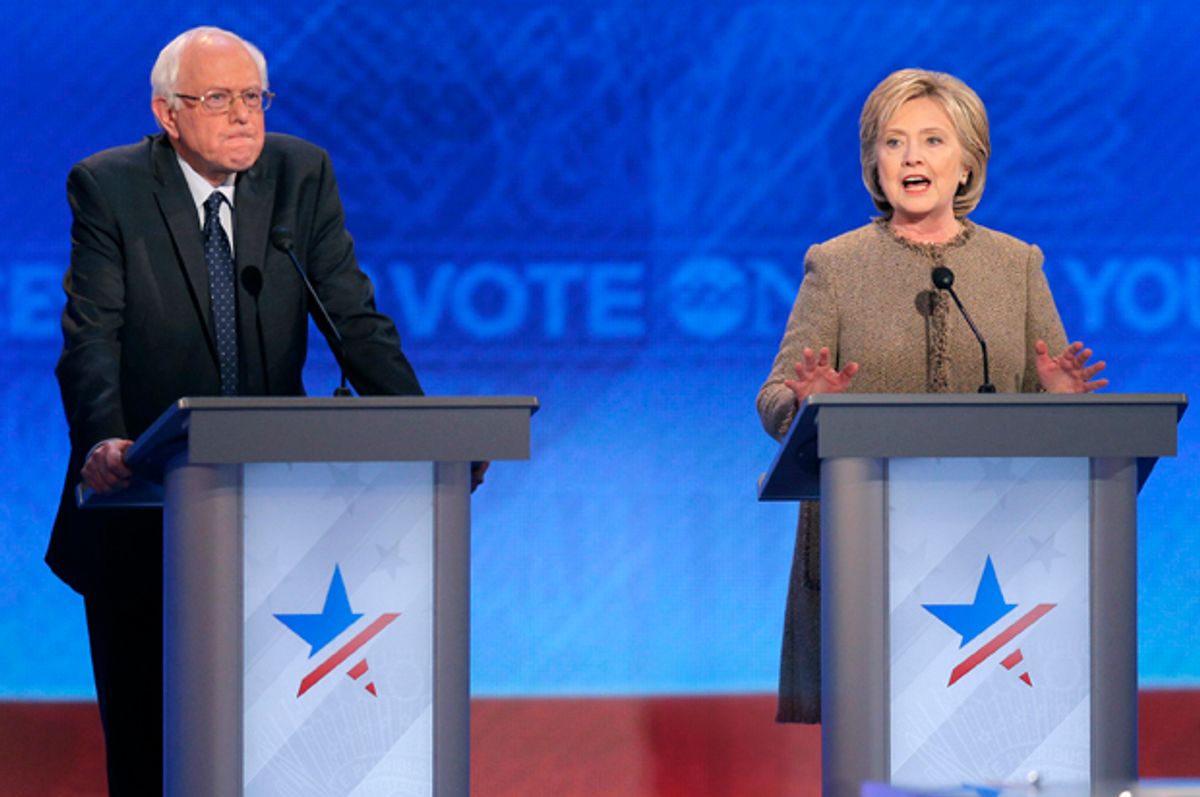 The Clinton campaign’s cynical capitulation to corporate power appears to be reaching brazen new heights as the Democratic presidential nominee goes on the offensive and publicly attacks her rivals for their advocacy of single-payer healthcare.

Clinton, who has racked up just under $3 million from the healthcare industry in speaking fees over the past two years, has publicly dismissed the “Medicare-for-all” model proposed by Bernie Sanders as well as the publicly administered health insurance option floated during the debates surrounding the Affordable Care Act (ACA), claiming such policy proposals are risky and irresponsible.

Clinton’s position was summed up during the forth Democratic presidential debate with the words: “We have the Affordable Care Act. Let’s make it work.”

There is little doubt that Clinton and the entrenched Democratic Party establishment have little appetite for taking on the medical insurance and pharmaceutical corporate cartel. The call to “build on” the ACA and “make it work” is a campaign promise to the health industry, signaling that under a Clinton administration, business will continue as usual.

And business has been good.

Which is what we would expect, since Obama never intended to propose legislation that would fundamentally challenge our market-based, private insurance system. Obama himself has admitted that the ACA, the signature legislation of his presidency, was based on the healthcare policy proposals of the Heritage Foundation, a neoliberal think tank renowned for its free market extremism.

It didn’t have to be that way. In 2009, while the Obama administration was leading the charge for healthcare reform, the Harvard Medical School published a study analyzing the human impact of the U.S. standing in total isolation among the industrialized nations of the world in not providing healthcare to all its citizens and found that it resulted in an estimated 45,000 people dying every year as a direct result of being too poor to afford healthcare.

That same year, while tens of thousands of people were dying from a lack of medical insurance and the nation was reeling from the deepest recession since the Great Depression, the five largest for-profit health insurance companies in the United States set a new industry profit record while cutting 2.7 million people from their rolls and leaving them bereft of coverage.

For these and other reasons, in national polls both single-payer insurance and the public option consistently garnered majority approval, polling substantially better than the Senate healthcare bill (which dumped the public option for state-managed insurance market exchanges) among both the general public and physicians. More than five years after the passage of the ACA, a majority of the public, including over a quarter of Republicans, continues to support replacing our private, market-based medical system with one that is administered by the government and made available to all regardless of income.

Yet, even the more milquetoast and reformist proposal of opening Medicare up so that the public could purchase insurance from the government, in essence putting a public option in competition with the plans offered by private insurers on the market, was killed in favor of “putting points on the board” (to use one of Rahm Emanuel’s favorite aphorisms from the time).

In 2009, Obama omitted the public option from the 11-page healthcare proposal he submitted prior to his bipartisan healthcare summit -- an event that notoriously excluded all single-payer advocates, instead featuring 22 lawmakers who collectively had received over $46 million in campaign contributions from the healthcare industry since 2005.

The official reason given by the administration was that the public option simply did not have enough Congressional support. Even though the Democrats controlled both houses of Congress, the Obama administration argued that the public option had to be taken off the table, citing the 60 votes in the Senate needed to overcome a Republican filibuster. The ruse was up after the Democrats decided to pass the final bill through reconciliation -- a process that required only a simple majority of 51 votes, the number of public option supporters the Democrats had continually asserted they had. Reconciliation effectively bypassed the Republican threat of filibuster, and even though a clear majority of voters in the Congressional districts of progressive Democrats supported using the reconciliation process to ensure passage of the public option, Congress still refused to include the measure in the final legislation due to the pressure being placed on them by the Obama administration to exclude it.

Why did Obama and the Democrats purposely kill the public option? Because they made a quid pro quo backroom deal with industry lobbyists, promising that no government alternative to private health insurance would be in the final bill if the industry would provide their support.

Similarly, the White House reached a secret agreement with the pharmaceutical lobby, agreeing to table substantive reforms, such as the government leveraging its negotiating power to lower drug prices or legalizing the importation of drugs from Canada, and including policies that Big Pharma favored and stood to reap a windfall of billions of dollars in profits from. In exchange, the White House received the industry's support, which resulted in the pharmaceutical lobby spending $150 million on television commercials in support of the ACA, more than the total amount Republican Senator John McCain spent on his 2008 presidential campaign.

The public option, expanding Medicare coverage to people beginning at the age of 55, importation of drugs from Canada and bulk price negotiations were all traded away by the Obama administration, and in their place Democrats offered $450 billion in taxpayer money to publicly subsidize the mandated purchase of private health insurance, effectively expanding and entrenching the corporate monopoly over the collective health of millions of people while still managing to leave 27 million people uninsured by 2025. And all of this was done with industry lobbyists behind closed doors, in total disregard for Obama's campaign pledge to negotiate with the companies on C-SPAN and put an end to “the same old game playing in Washington.”

But the game playing continued unabated and it wasn't long after the ink dried on the Affordable Care Act that the revolving door between political offices and corporate boardrooms was spinning full force.

"ObamaCare has become big business for an elite network of Washington lobbyists and consultants who helped shape the law from the inside," reported The Hill in 2013, noting that in the three years following the passage of the ACA, "more than 30 former administration officials, lawmakers and congressional staffers who worked on the healthcare law have set up shop on K Street.”

According to the New York Times, by 2013, the healthcare industry spent "more money on lobbying in Washington than any other sector of the economy" and of the "revolving door lobbyists," those "specializing in healthcare" accounted for "more than any other economic sector.”

It’s not hard to see that Joe Biden was right when he called the ACA “a big fucking deal.” It was a lucrative business venture crafted between the Democratic Party and the health industry, and everyone in Washington is cashing in. The Clinton campaign is proudly proclaiming to her industry bankrollers that when she is commander-in-chief, the party will continue to roll on.

Chris Brooks is a graduate student in the Labor Studies program at the University of Massachusetts, Amherst, and a labor organizer living in Chattanooga, Tennessee.