Don't blame SF's "left-leaning, anti-growth, NIMBY homeowners" for the city's housing crisis: It's not as easy as building our way to victory

Evictions, overcrowding, rentals swallowed up by AirBnB: The housing-crisis landscape. People are fighting back 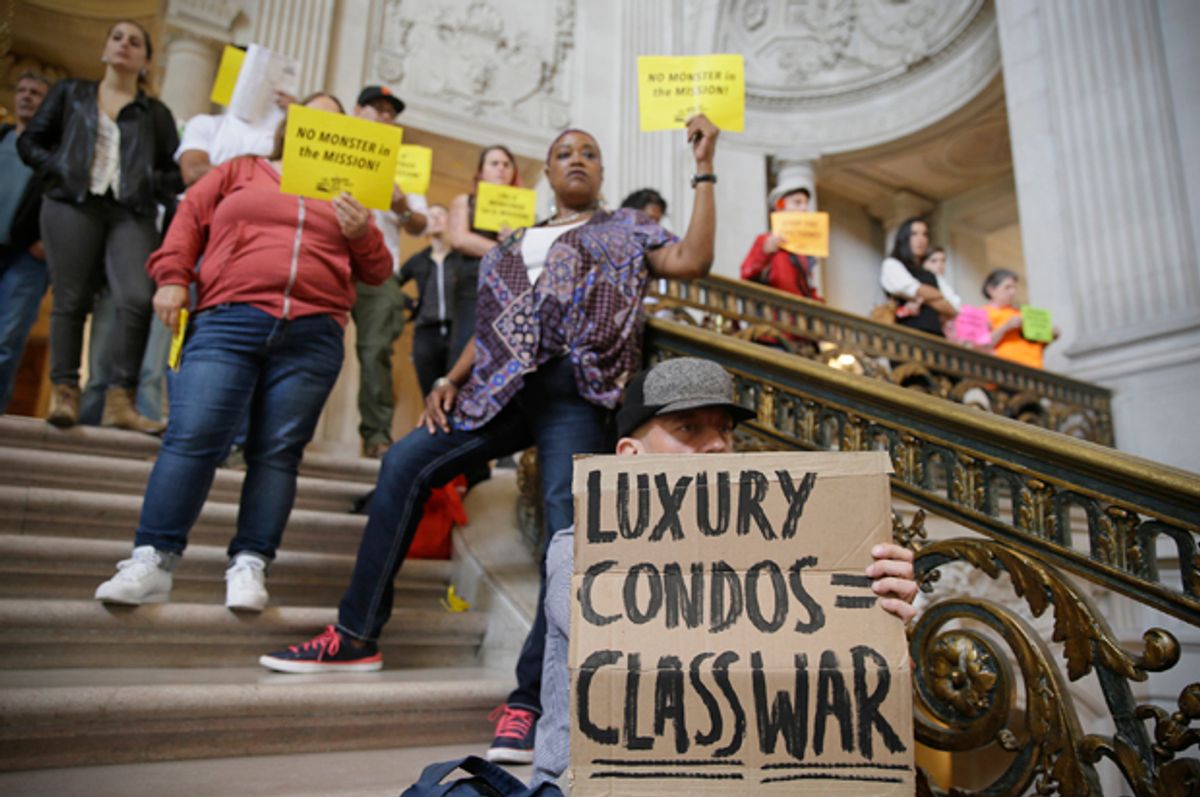 The economic disaster of the Great Recession served as painful lesson on the dangers of deregulated markets. The lesson was particularly painful for many because the market in question was the housing market and the commodities being traded and bet on were people’s homes.

A decade later housing is back in the headlines, as skyrocketing rents in many cities are fueling a crisis of affordability and contributing to a new wave of gentrification and displacement. But despite what we should have learned, there is no shortage of commentators stating with unshakable faith that the crisis is the result of someone, somewhere, getting in the way of the market.

Recently the Atlantic ran an article by staff writer Conor Friedersdorf in which he claims that the housing crisis in San Francisco is really a simple matter of supply and demand. If wooly-headed progressives and their representatives in city government would just get out of the way the market would quickly respond to the demand for housing and the problem of affordability would soon be solved.

The launching point for Friedersdorf’s commentary is a play performed by San Francisco school kids about gentrification and the role of the tech economy, as covered by NPR in a recent edition of "This American Life." Friedersdorf objects to the play singling out technology corporations and their highly paid employees as the villains of the housing crisis. The real problem, Friedersdorf tells us, is “the widespread opposition of [San Francisco’s] left-leaning residents to lots more new building" (emphasis his).

He goes on to explain that the real villains are left-leaning, anti-growth, NIMBY homeowners, who have an understandable interest in driving up property values and maintaining the charm of old S.F., and have successfully prevented the city from building homes at anywhere near the rate and density necessary for supply to match demand.

Despite the impression Friedersdorf gives, we hear this argument a lot in the Bay Area. Really, a lot. Friedersdorf would know that if he spoke to any of the city’s many housing activists, who have addressed this argument in depth over the years. In his version of the story, though, they appear only in passing, as dupes who have been hoodwinked into a coalition with NIMBY homeowners.

Friedersdorf, like many who write about San Francisco, treats the city as though it exists in a vacuum and pays little attention to the role played by other parts of the region. The idea that left-leaning homeowners up in San Francisco are more anti-density and anti-growth than their suburban counterparts to the south in Silicon Valley doesn’t make a lot of sense. For that matter, drive east on Route 24 from the city and you can see large billboards along the highway denouncing even the anemic efforts of regional agencies to encourage more housing in the more conservative suburbs of the East Bay.

If the driving factors against new building are property values and maintaining “quality of life,” then Friedersdorf has more or less captured homeowner politics everywhere.

Through this lens, San Francisco looks pretty good when compared with other jurisdictions in Silicon Valley and elsewhere in the region. While many of these cities are more than happy to make room for sprawling tech campuses and new office development, putting even more pressure on local housing markets, the homeowners who live there won’t allow much new construction.

As a result San Francisco (as well as Oakland and a handful of older working-class cities) shoulders a disproportionate share of the housing burden. To the extent that new construction is a problem, this has less to do with political ideology than with the class interests and lifestyle preferences of homeowners, and here the greater villains are the free-riding cities of Silicon Valley’s San Mateo and Santa Clara counties.

But there’s a second, more fundamental error in Friedersdorf’s story about markets and housing. It is a myth that the city has not been building a lot of housing. But the more important question is whether it is building a lot of affordable housing. Removing obstacles to new, denser market-rate housing development, even in suburban jurisdictions, won’t solve the housing problem. The market here does not have a mechanism for meeting the demand for affordable housing, and this failure is greatest where the need is greatest, at the lowest income levels.

In fact, given the severe inequality in San Francisco and the region, we can’t even speak of a housing market, but have to talk about separate housing markets. And when Friedersdorf and others push more market rate construction they are really only addressing one of these markets, where supply is already closest to demand. Adding units in what is effectively a closed elite market will not translate into a lowering of prices for anyone else.

And that’s not all. There is compelling evidence that market rate development not only doesn’t help to relieve housing costs for lower-income residents, but can actually make the problem worse. Tim Redmond, editor of the online Bay Area paper 48Hills.org, looks at a study by the City of San Francisco examining the relationship between market rate housing production and demand for affordable housing. The study found that, “every time the city allows 100 new high-end housing units, it needs to build between 20 and 43 new affordable units –just to keep the housing balance the way it is now” (emphasis in original).

Supply-side cheerleaders can keep crying "build, build, build!" as much as they want but greasing the wheels of the market is not going to have any net benefit for most people, and certainly not for the vast army of low paid service workers that are also part of the Bay Area’s tech economy. And it’s not just voices on the left voicing skepticism that trickle-down housing policy simply doesn’t work. No one denies that we need more housing but unless the focus is on building affordable housing, more construction does not mean less crisis.

Once you understand this, the “no-growth” position of many tenants and tenant activists suddenly makes a lot of sense, and has little to do, as Friedersdorf would have it, with them being “economic illiterates” who have been duped by NIMBY homeowners. Market rate development not only destroys many actually existing affordable units, it at the same time makes the ratio of unaffordable to affordable housing worse, resulting in the mass displacement of working-class people and communities of color that we see in San Francisco today.

This is why so many residents in the city’s Mission district fought for Proposition I, a ballot initiative in 2015 to halt market rate development in the neighborhood until a clear plan was in place to protect existing housing, provide adequate affordable housing, and prevent mass displacement, particularly of working-class Latino residents. Supporters of Prop I knew all too well, and have experienced firsthand, what redevelopment means for low-income people and communities of color. Like so many San Francisco neighborhoods, the Mission has been through urban renewal schemes before. The strong support for Prop I reflected this experience, and many of the community’s longtime residents know exactly what is at stake.

So do developers and their supporters. Proposition I lost at the ballot as proponents were outspent nearly 10-to-1 by the real estate lobby. Well-heeled and well-connected opponents of Prop I blanketed the city with messages meant to obscure this fundamental and historical connection between race, redevelopment and displacement.

What is the role of technology corporations in this mess? Friedersdorf is unhappy that the industry is being singled out. And he has a point. At a certain scale, different industries have similar impacts on local economics and politics. And regardless of the myths that persist about the uniqueness of the new tech barons, large corporations act more or less the same regardless of whatever particular industry or industries they represent. Finally, there certainly are other industries involved in driving the region’s housing crisis, most notably real estate and finance.

But Freidersdorf’s objections wear thin when he claims that “the main thing that tech companies have done to fuel rising rents is to create lots of high-paying jobs, employing members of a generation who are more likely than their parents to prefer cities to suburbia.”

Actually, they do a lot more than that. In terms of jobs, and while estimates vary, for every high-paying job they create, many times more low-paid service jobs are created, both directly as employees and through subcontracts, and indirectly, in the many service industries that the new and old money depend upon. All of these jobs are held by people who need to live somewhere.

Tech companies are happy to take credit for creating the high-paying jobs but wash their hands of any responsibility for the working and living conditions of these underpaid service workers. In doing so they’re playing the oldest corporate game in the book: externalize every possible cost and hoard every possible benefit.

Big tech companies also throw their weight around in other ways. To take just two recent highlights involving housing: Last November AirBnB spent more than $8 million to protect its control over a huge chunk of San Francisco’s housing stock, which made national news when the company almost shot itself in the foot just before the election (which it successfully purchased in the end). More recently, Facebook announced what amounts to a homesteading plan to pay its employees to settle some of the last remaining relatively affordable areas of northern Silicon Valley, including, most notably, East Palo Alto.

In the end the story Friedersdorf tells is not about San Francisco or the housing crisis here. To tell that story he would have to talk to the people living it and who have to live with the consequences of how and where they chose to fight. Had he done so he would have learned that the simplistic supply and demand, build our way to victory arguments he offers have been discussed, debated and analyzed here for years. They are rejected because they don’t work and because they are used as ideological cover for yet another round of massive displacement of working-class people and people of color.

For most people living in the Bay Area the housing crisis is not experienced and not confronted on the policy terrain of future housing construction. Even if we accepted the logic of the supply-side argument, it makes precious little sense from the perspective of tenants today to focus only or even primarily on long-term struggles for new housing if they and their children and their neighbors won’t be around to benefit from it.

What the landscape of the housing crisis actually looks like here is epidemic levels of evictions, overcrowding, rental properties disappearing into the AirBnB void or converted to condos, and entire neighborhoods being swallowed up by the market. But residents are not going quietly into the night. What Friedersdorf’s misdirection succeeds in doing is rendering invisible to readers a rebellion by renters that is spreading across the region every day and has become red hot in San Francisco. This emerging renters’ rights movement in the Bay Area and the spread of fights for rent control and eviction protections mirrors similar efforts around the county. This is the story that needs telling about our national housing crisis and movement to confront it.

Tony Roshan Samara is the program director of land use and housing at Urban Habitat and also serves on the steering committee for the Right to the City Alliance. He runs the Cities and Globalization Twitter account at https://twitter.com/CGWG2 and most of his publications are available at http://independent.academia.edu/TonyRoshanSamara.