David Axelrod explains the real appeal of Donald Trump: He is the antithesis of Obama 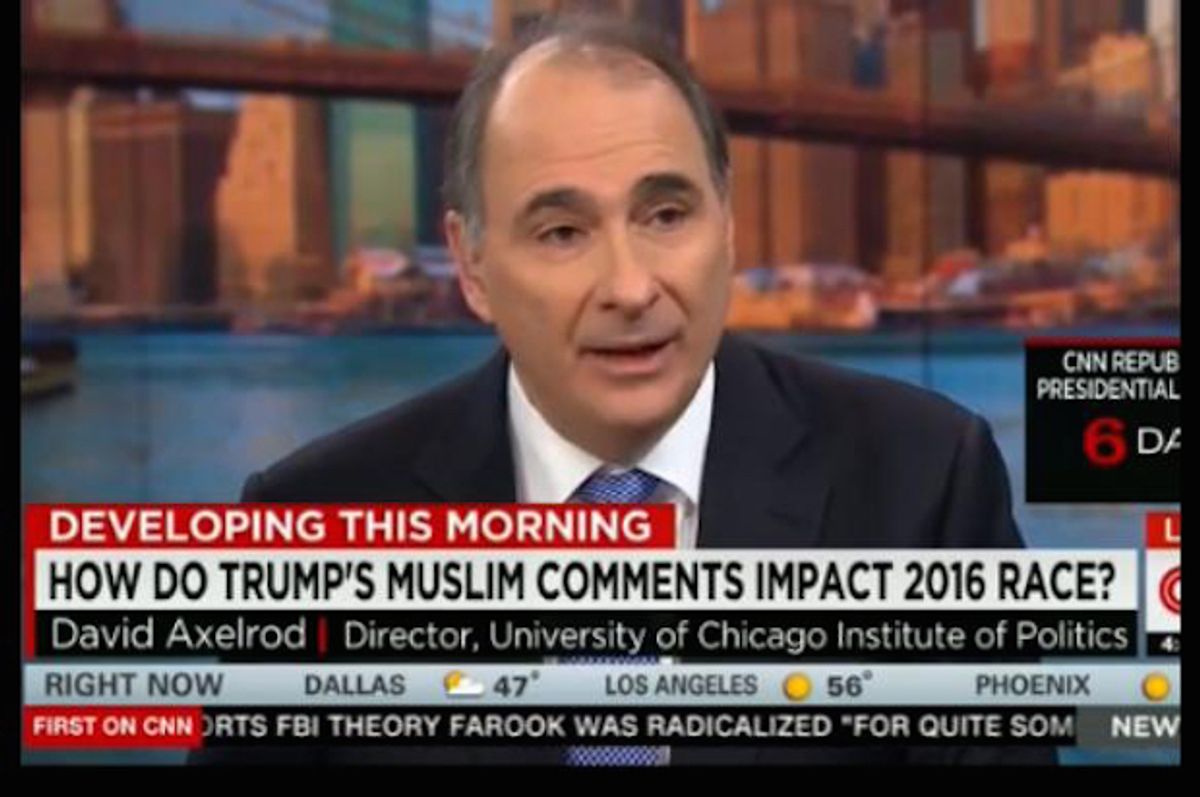 "It was so obvious, I’m embarrassed I missed it," former Obama adviser and CNN contributor writes of Donald Trump's bewildering appeal in an op-ed published in the New York Times on Monday.

"Like most of the other talking heads on TV, I was haughtily dismissive of Donald Trump’s candidacy," Axelrod admits, conceding that his early prediction that Trump "would fade in the fall, when Republican voters got serious about making a long-term commitment" was way off.

"The galling thing is, if I had only reread my own words, written nine years ago to another aspiring candidate," Axelrod continues, "I would have taken the Trump candidacy more seriously from the start":

In late 2006, when Barack Obama was a first-term senator pondering a long-shot race for the presidency, he asked me to write a strategic memo exploring his prospects. My bullish analysis was predicated on several factors, but rooted in a theory I had developed over decades as a political writer and campaign consultant.

Here’s the gist. Open-seat presidential elections are shaped by perceptions of the style and personality of the outgoing incumbent. Voters rarely seek the replica of what they have. They almost always seek the remedy,

"Today, after seven eventful years, attitudes toward President Obama will shape the selection of his successor," Axelrod suggested, attempting to explain Trump's popularity with Republican primary voters -- the base of the party.

The Republican base is infuriated by Mr. Obama’s activist view of government and progressive initiatives, from health care reform to immigration, gay rights to climate change.

Beyond specific issues, however, many Republicans view dimly the very qualities that played so well for Mr. Obama in 2008. Deliberation is seen as hesitancy; patience as weakness. His call for tolerance and passionate embrace of America’s growing diversity inflame many in the Republican base, who view with suspicion and anger the rapidly changing demographics of America. The president’s emphasis on diplomacy is viewed as appeasement.

So who among the Republicans is more the antithesis of Mr. Obama than the trash-talking, authoritarian, give-no-quarter Mr. Trump?

"Trump is the perfect counterpoint to a president whose preternatural cool and deliberate nature drive his critics mad," Axelrod argues before stopping short of extending the former reality TV star's appeal to the general electorate. "Unlike in 2008, when Mr. Obama’s appeal reached a majority of independents and even some Republicans, polling suggests that if he were nominated, Mr. Trump would face a steep uphill battle in a general election ... But as the most ardent and conspicuous counterpoint to the man in the White House today, the irrepressible Mr. Trump already has defied all expectations."