Why can't men complaining about "trashy" women keep their own clothes on?: A social media investigation 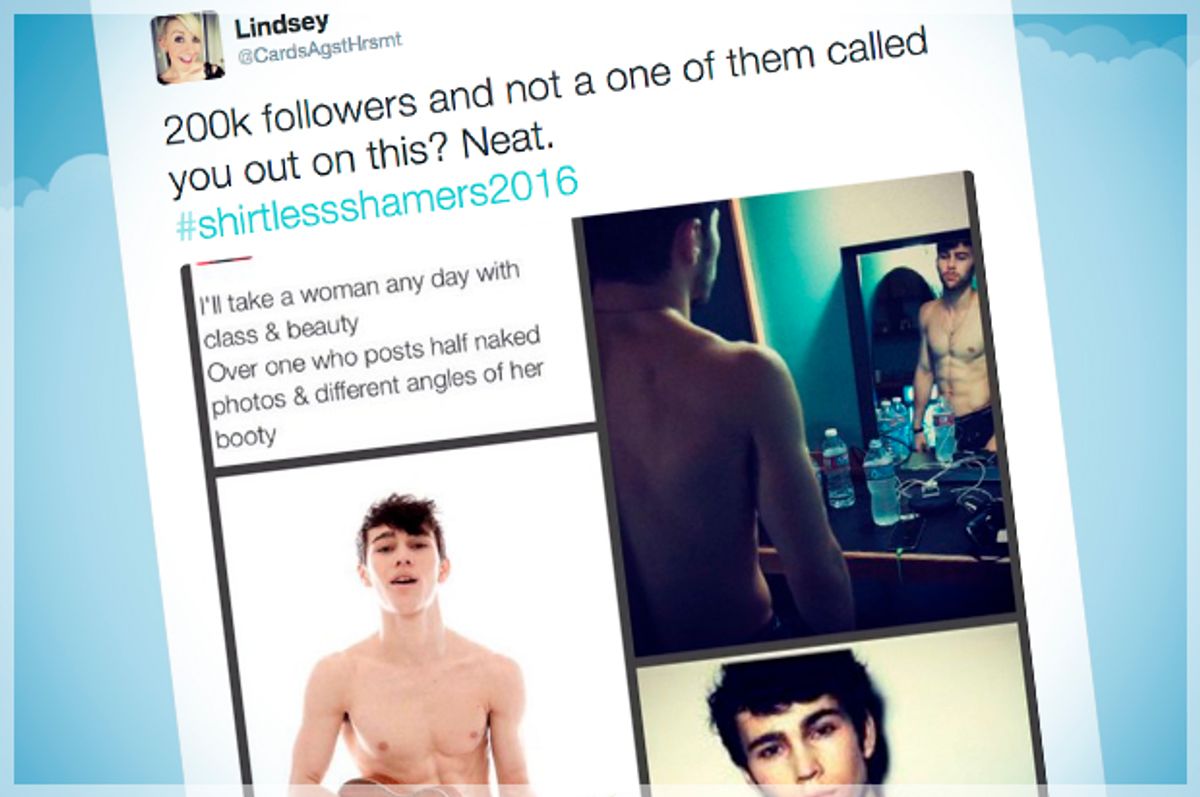 There's something really special and sometimes even wonderful about the way social media is such a perfect platform for the self-righteous to vent — and expose their cluelessness. So fair warning — if you're going to complain to a company that the product you're incorrently using is turning your skin pink or rant about the "Senators and rappers I am beefing with," that's your right, but the rest of us may have to point and laugh. And if you want to get on a high horse and try to police exactly how women share images of their own bodies, prepare for someone to single out your rather contradictory behavior. Ladies and gentlemen, welcome to #ShirtlessShamers2016.

Twitter user Lindsay is already known in certain feminist circles for her 2014 Cards Against Harassment project, a series of cards women can hand out with messages like, "Are you my doctor? I didn't think so. So keep your opinions about me and my body to yourself next time." In 2013, she went viral with a Minneapolis Craigslist "Missed Connections" aimed at a driver who "leaned out of your window and made some ridiculous series of leering comments" about her body before peeling off. Now, this month, she's decided to take aim at guys who have a problem with women who flaunt it — but can't seem to keep their own clothes on.

Given her wheelhouse, it makes sense that Lindsay would already have had a few thoughts early in January for tweeters who comment, "Ladies, if you dress slutty and get raped I feel NO sympathy." Then she began noticing a certain trend. She posted a screenshot from a man who'd said, "Smh this same female always half naked like where your respect!!! Morals" — and a photo of the same man appearing "#blessed" and shirtless at the gym. "But you said…" she pondered. Lindsay seems to have first started the hashtag on January 10, with an image of a shirtless man and his post that "I hate it when guys tell girls who show their cleavage and ass in pictures that they're cute… She needs to learn self-respect." As she wrote at the time, "Nobody tell Mr. January he's cute. He'll never learn."

Before long she was wondering, "How? How is this so easy?" On came the deluge. Pictures of men who complain that women who post "damn near naked" just "need church." Shirtless. Men who say, "Men want to feel privileged to see you undress, not one of many who got to." Shirtless. Twice. Men who say "I'll never date a girl who posts half naked slutty selfies." Also shirtless, also twice. Men who say "You don't have to be half naked for a real man to notice you." Shirtless. In their own profile pics. On and on they go, photos of men proudly displaying their six packs, preaching about respect, what constitutes "wife material," and their disdain for the "trashy" and the "hoes." You, yes, you, with the mardi gras beads, please, share with the world your opinions on who doesn't meet your high standards. You, posing in your underwear, describe your ideals of "class and beauty." This is fascinating.

Many of the posts are amusing. Some — like the shirtless guys who say they'd "beat the shit outta my girl" or "tombstone her" if she posted "half naked" on social media — are not. But I think my favorite is the guy who tells Lindsay directly that "Unlike you, I don't use vine or Twitter to gain unnecessary attention" — and whose Twitter avatar is a shirtless beefcake shot. (Sample recent tweet from the gentleman: "I never get salty when my ex girlfriends date another guy because I know I'll always have better abs than them so.")

Guys, no one thinks that having your "Do what I say and not what I do" mental disconnection exposed to the world — just like your nipples! — is going to set off a revolution in your mind. You have a set of rules for your wife material and another for yourself; we know. But it is enjoyable for the rest of us to see you, so swift to judge the ladies for what you insist is attention-seeking behavior, with seemingly zero awareness of your own actions. It's called hypocrisy. And if the shirt fits, guys, feel free to wear it.