There are too many truthers out there: Donald Trump, anti-vaxxers and the new "X-Files" in our conspiracist times 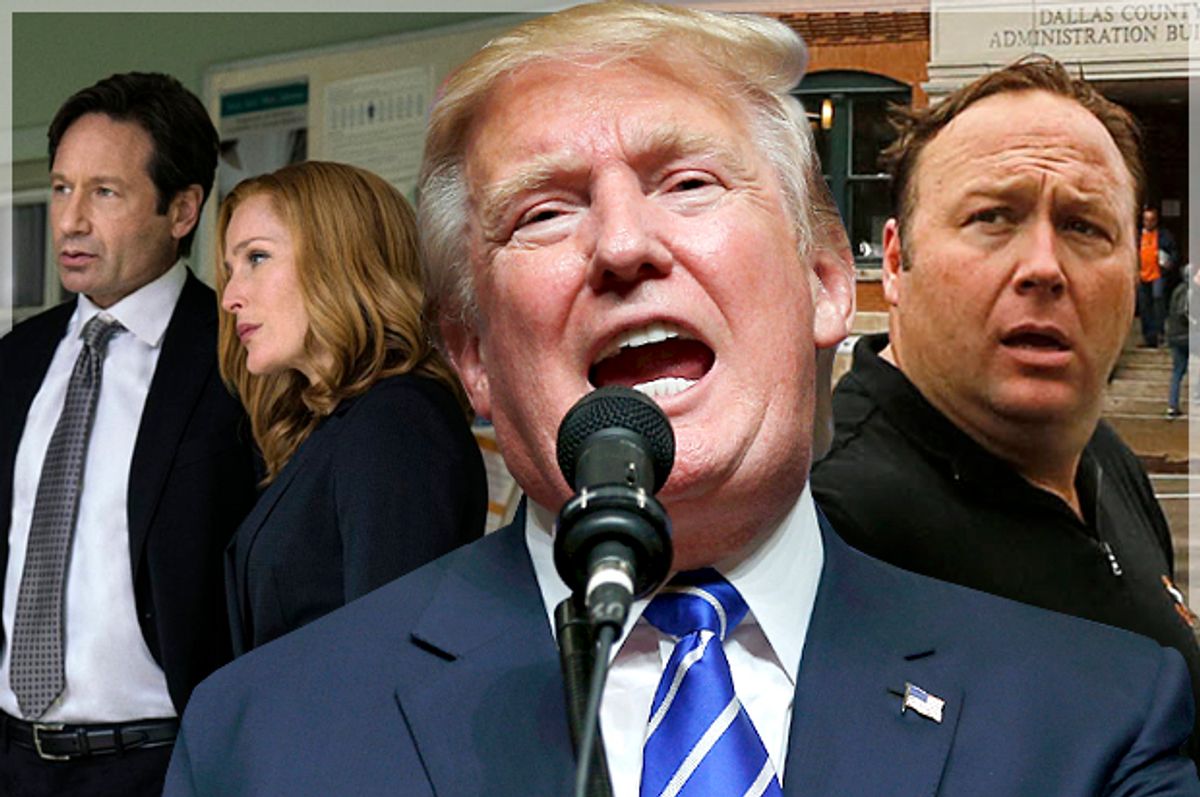 In 1993, Americans – to the tune of 7 million per episode – fell into the habit of watching two beleaguered FBI agents chase monsters and aliens while encountering pushback from a shadowy network of higher-ups in and out of government.

By its fifth season, “The X-Files” would average nearly 20 million viewers per episode, with a high of 27 million. Do you know what they call a show like that today? They call it a football game. Nobody else gets those numbers.

Nobody, including the rebooted “X-Files,” already the object of grumbling in the pundit class. The reviews have been mixed, leaning toward crabby, especially as regards the first episode. It’s possible that Mulder and Scully will, as the season progresses, again capture ball lightning in a specimen jar; but if they don’t it’s not necessarily their fault.

It can never be 1993 again. The first three seasons (and some of the fourth) of “The X-Files” aired on Friday nights, which was a terrible time to program to any group except People Who Have No Lives.

We can divide that group into two subgroups.

* People who have no lives because they are nerds. I don’t need to tell you that, for this subgroup, “The X-Files” was crack cocaine, which was also very popular in 1993 but with a different audience. In fact, “Star Trek – The Next Generation” had just then ended its run, so the new kid on the block answered the question: “What do I have to live for?”

* People who temporarily have no lives because they are new parents. “The X-Files” perfectly timed the sharp birth rate spike of Baby Boomers having babies. In 1993, there were more kids in diapers than there had been for 20 years and more exhausted parents sitting on the couch on Friday nights. Dana Scully even embodied the exhausted-but-glam look to which new moms of this period aspired.

So one could – even as everything that was ever cool about oneself seemed to be leeching away – watch this cool TV show, in an era when cool TV was rare and highly prized. There was “NYPD Blue” and “The Simpsons” and “Seinfeld.” That was about it.

Wait. Why didn’t bored parents just go online? Because the Internet was not quite happening. The internet was Compuserve and Prodigy. As a rule, we consider the era of non-geek Net use to have begun in 1995 (and that was clunky dial-up AOL). This is an important consideration not only in the way it limited user options but also in terms of the show’s ethos.

The slogan was The Truth Is Out There. Yes! In 1993, that was where the truth was. In the 1990s, there might have been a human tapeworm living in the sewers of Newark or a manifestation of the demon Azazel substitute-teaching in New Hampshire, and you would have almost no way of reaching out for (and personally vetting) that information. By 2000, the Net had effectively merged Weekly World News and “60 Minutes” and everything in between into one ginormous Cheesecake Factory menu from which you could order just about anything, but in 1993 people were comparatively helpless. We needed a champion like Fox Mulder.

Today, the Truth, as you construe it, is not Out There. It’s in your damn phone. We’re all a little bit Mulder, a little bit Scully. We check shit out and decide whether or not it passes our smell test.

A precipitate of that trend is the way Truth has gotten a bad name. (Mr. Keats, we are so sorry.) What’s a Truther? Somebody who believes the government helped destroy the World Trade Center or that Newtown was a false flag, a tableau mourant staged to promote gun control. Truther might mean you don’t vaccinate your kids, you think AIDS was a government plot, you think Obama was born in Kenya. In 1993, Mulder was heroic for questioning the official record. In 2016, that job belongs to Alex Jones, and the Lone Gunmen have been displaced by the Loud Douchebags. To the reboot’s credit, it grapples with that very problem by having Mulder and Scully rub up against a thinly veiled version of Jones.

If the preceding sounds depressing, an even darker cultural critic might argue that the core nerdo-apocalyptic audience that sustained the old “X-Files” has moved to a new neighborhood – the one where the battle Mulder was fighting has been catastrophically lost and zombies roam the planet. Daryl Dixon, the prototypical crossbow-wielding backwoods peckerwood Mulder and Scully might have uncovered on one of their monster-hunting field trips, has emerged as a rational model for effective action. Eugene Porter, the kind of speculative nebbish who could have been a likely repository of truth in the “X-Files,” is now the Last Nerd Standing, hapless, useless and a false pretender to arcane knowledge.

So much has altered since 1993. On the other hand, that year saw the publication of a richly-discussed book about the sexual proclivities and attention-seeking behaviors of a wealthy and power-hungry man. It was called “The Lost Tycoon,” and it was about Donald Trump. Some monsters don’t change.