Why we bake in a blizzard: When the big storm hits, "your world gets narrowed" 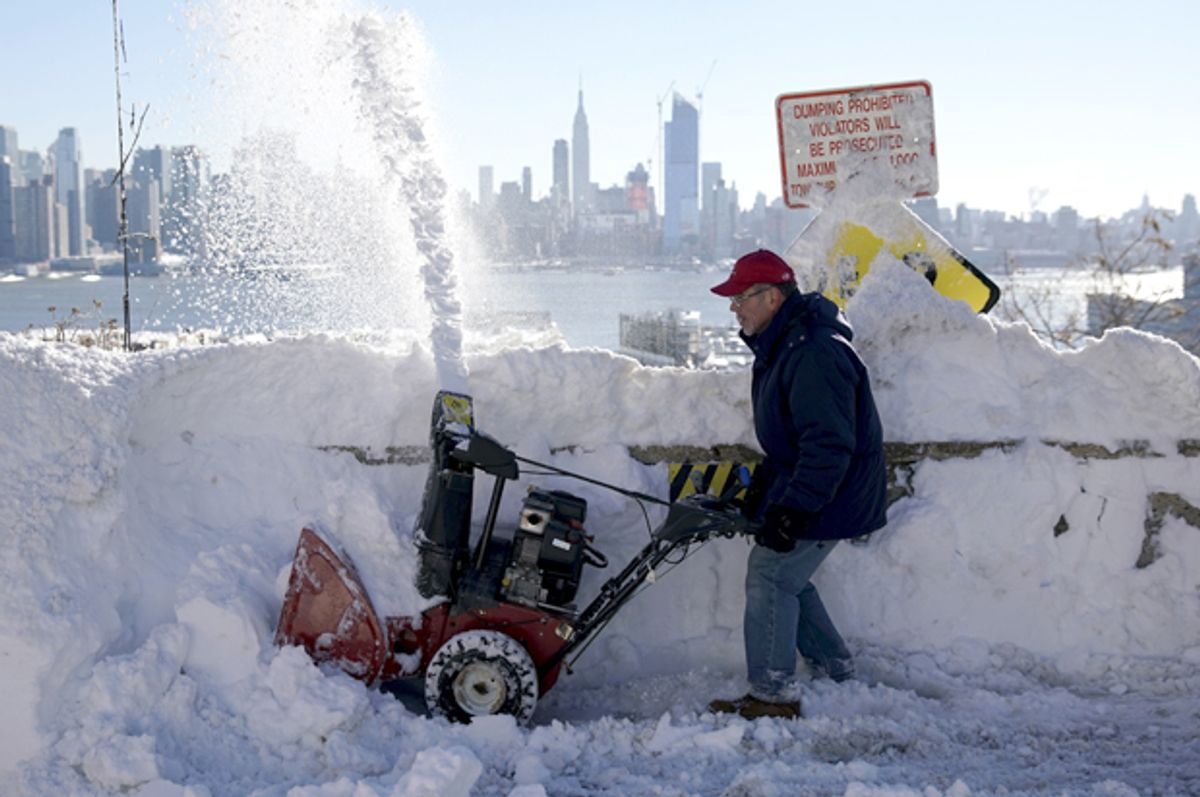 The East Coast blizzard has now dropped several feet of snow on New York, Baltimore, Washington, D.C., and other cities. When these storms are on their way, some people panic. Others look forward to them. Kids get irrationally excited. When a snow storm or other kind of extreme weather hits – especially one that’s predicted days in advance -- human beings go through a series of odd, furtive responses, some with roots that are relatively recent, others that date back to the origins of homo sapiens. Some are entirely logical, others are hard to figure out. And in disasters, human societies can form or break apart.

Salon spoke to cognitive psychologist Art Markman, who teaches at the University of Texas at Austin and runs the “Two Guys on Your Head” podcast. The conversation has been lightly edited for clarity.

The Northeast and Mid-Atlantic states have been flattened by snow. When we know a blizzard or some similar bout of extreme weather is on its way, how does the brain react?

We go into what we could call an avoidance mode. Our brains have two main modes: Approach and avoidance. Approach is what you use to get to desirable things, avoidance is what you use to avoid negative things. So one of the big things that happen is you become concerned about all the things that could happen – everything that could go wrong now looms really large on your psychology. That’s why you see the immediate run on grocery stores and convenience stores, and people start stocking up on all kinds of stuff.

We go into a defensive crouch.

And the other piece of it is that we are so reliant on our tools to do anything. Most other animals evolved specific mechanisms to deal with their environment.

Could you give us an example?

Think about cockroaches – the light comes in and they scamper away, because the dark is their friend. And deer – I’m in Austin, Texas, and we’re overrun by deer in some of our suburban neighborhoods. But deer have no clue how to deal with the modern environment. They can’t cross the street effectively, they’ve run out of stuff to eat, because they’re adapted to a specific environment that involved a lot more trees and grass than what we’ve got in the suburbs.

As humans, we’re not like that. We survive in a lot of different landscapes, but we do that by essentially controlling landscapes through our tools. And as long as we’ve got our tools in place – which we’ve spent the first two decades of our lives learning to use – we’re in great shape.

But one of the things that natural events can do – for extreme weather or natural disasters – is they disrupt a number of our tools. So for example, these days, people are almost sunk if the Internet goes out. You’ve got a fair number of people, it’s not even clear they can read a paper map, let alone a variety of other tools.

So one of the things that causes us stress is that a lot of our tools may no longer be useful for us, so we’re not sure how to cope.

We’ve become dependent on technology, and then there’s a second piece. We distribute our workload societally: We all have very specialized jobs we take on, and then we rely on people to help take care of stuff for us. But when happens when you get two feet of snow is you can’t immediately get out to all of the other people who you need to help take care of all of your daily needs. And that’s really stressful – your world gets narrowed to the people accessible a couple of blocks around you. Which until all the roads are cleared and passable is very stressful for people, too. Particularly in more suburban environments.

Part of the paradox is that these big cities, which are getting all of this attention right now, they often do pretty well, because they can walk to almost anything. So a lot of businesses are open, because people are in the neighborhood already, and they can actually survive reasonably well. But in the suburbs, where you might be a mile or two from a lot of the stores you need for your supplies – that mile or two is not a big deal under normal circumstances, but a huge deal when the weather’s extreme.

For most of human history, we didn’t have cities, so in some ways we’re being thrown back into an older kind of human existence, back when life was more isolated.

Yes – but the interesting thing about that older form is that [in prehistory], to the extent that people specialized, we’re still hanging out with the whole group, in a small area. Now you’re isolated, without most of those survival skills.

What about anxiety and extreme weather? Presumably it surges, then comes down once the storm hits?

Uncertainty is something that’s one of the banes of human existence in the modern word: We don’t like to deal with things that are uncertain. When it comes to extreme weather events – snow, for example… The National Weather Service was predicting something between five and 24 inches of snow; their models had a lot of variation in them…. What that meant it that people had no idea what to expect, and that created a lot of anticipatory anxiety about how things were gonna go.

…As the storm begins to bear down, least you have some sense of what’s happening. A lot of these events are more stressful in advance.

The stress reaction has some benefits to it: You get a burst of energy, which is useful when there’s something to be done. You wake up after a two-foot snowfall and you have snow drifts on your driveway. It’s time to start clearing out. Actually, that energy’s kinda useful to have.

So once there’s stuff to do, now you go ahead with taking care of the aftermath of the storm. But up until that happens, we get this anticipatory anxiety, and that creates energy without a lot of an outlet. Now you see people going out and preparing in some ways – batteries and so on – but also reaching out on social media. You get an upsurge of social media activity, as people say, “Storm coming, not sure what to do.” And just commiserate together. We don’t really want to be alone in a storm, or any other kind of disaster. So reaching out is a pretty normal reaction.

What about people who cook and bake and do other kinds of nesting when they’re housebound?

Well, you’ve got a lot of energy. It gotta go somewhere. And a lot of us are pretty busy, and don’t have a lot of time to do house things. So one of the interesting things about these storms is you’re housebound for a couple days, which creates this opportunity for you to do all sorts of things that you always wanted to do around the house but didn’t have the time to do. Which could be little fix-it projects but could also be baking 38 muffins. Which you would have loved to do but couldn’t, between dropping your kids off at dance lessons and getting to work and all of the other things that life creates.

So it becomes a kind of therapy.