The GOP and the dumbing down of the U.S.: Conservatives need to accept that Trump, Palin and anti-intellectualism are their fault 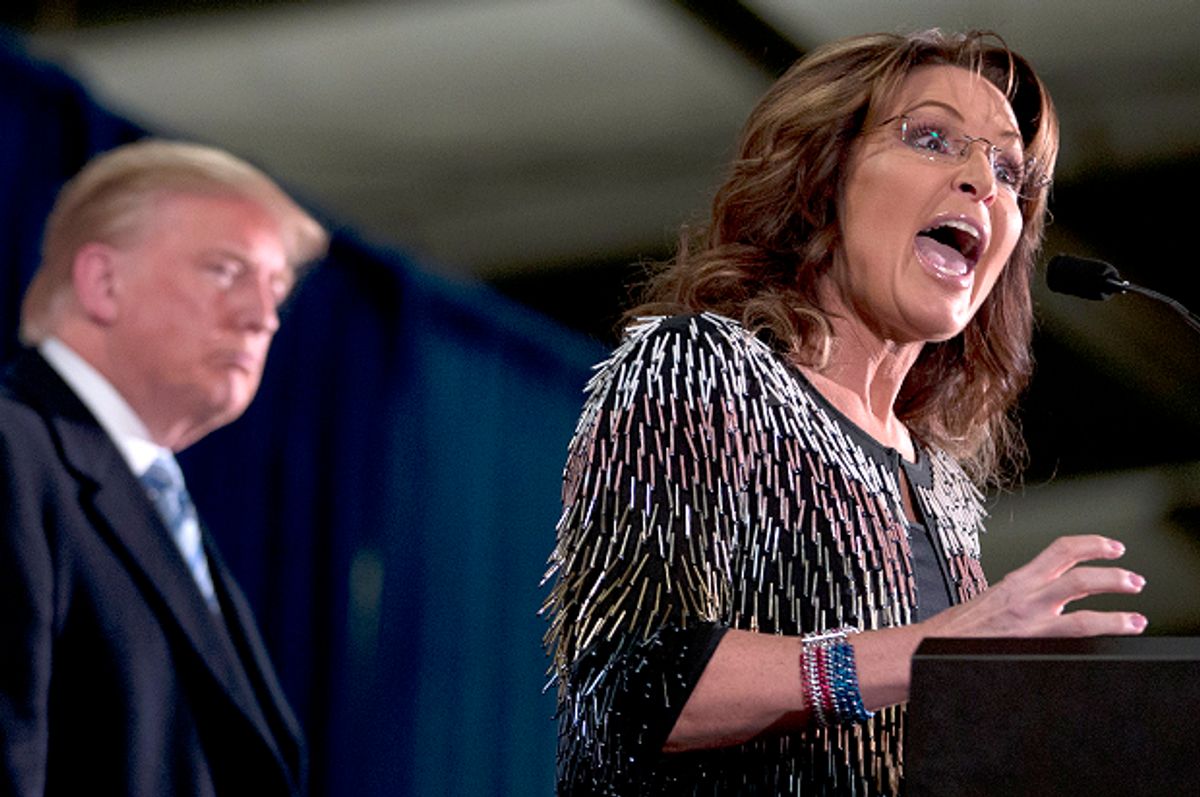 Quite a bit of commentary followed National Review's symposium, some of which pointed out the irony of conservative media personalities attacking a celebrity candidate whose existence they helped make possible. I did so briefly in a post last Friday. And I imagine this conversation will continue well into 2016, as the Trump circus rolls unimpeded through the Republican primaries.

There was, however, another anti-Trump piece published in the National Review over the weekend, this one by Kevin Williamson. Titled "Our Post-Literate Politics," the article is a lamentation on America's growing illiteracy. Williamson's thesis is that Donald Trump's presidential candidacy is only possible in a society that doesn't read or think much. He writes:

"Trump is something that could not happen in a nation that could read. This is the full-flower of post-literate politics. There are still individual Americans who can read, a fact for which writers should say daily prayers of gratitude. There are even communities of sort, and not only ladies' pinot parties loosely organized around '50 Shades of Grey. Conservatives are great readers, which is why the overwhelmingly left-leaning world of New York City publishing constantly is looking forward to the next offering from Mark Levin or Bill O'Reilly, whose works produce literary profit sufficient to subsidize the careers of any number of poets and high-minded novelists. But we are not a nation that reads, or a nation that shares a living tradition of serious contemporary literature, fiction or nonfiction."

Williamson continues, pointing to the devolving literary habits of Americans over time. "The American Founders," he writes, "could have a conversation among themselves because they had in the main all consumed the same library of Greek and Roman classics, British and Continental literature ranging from fiction to political economy, legal literature, and the like. This did not ensure agreement or like-mindedness...What it ensured was literate and enlightened argument." Nothing to disagree with there. But that "enlightened" culture died a long time ago, and it was in any case rooted in plunder and oppression.

A few decades ago, Williamson argues, people were at least grounded in a book, even if it was a terrible one like "Atlas Shrugged." The point is that citizens had something like an internally coherent worldview, which was shaped by literature and informed by a tradition of thought, be it conservatism or liberalism or some other "ism." This is preferable to our current situation because it makes something like reasoned argument possible, people having actual positions to defend.

But even that seems impossible now, Williamson writes:

"From the man of many books to the man of one book, we devolved very quickly to the man of one sentence, the paragraph being too demanding and unwieldy a form. In the case of the Trumpkins, that sentence is 'Make America Great Again,' which has a great deal of emotional meaning but no intellectual content. That sort of sloganeering hardly begins with Trump. But Ronald Reagan's 'It's morning in America' was retrospective, a celebration of the substantial success of his first term in office; it was not a substitute for a program."

Reading all of this, it's hard not to be struck by Williamson's inability to locate the origins of this idiocy. What he's essentially complaining about is anti-intellectualism, and anti-intellectualism is overwhelmingly a Republican problem. There are dim voters on both sides of the political aisle, of course, and Americans are perhaps dumber than they used to be (about politics at least), but Trump's half-baked slogan is winning over far more Republicans than Democrats. He's their problem, and he only exists because a sufficient number of conservatives want him to. Trump -- or some leftist equivalent -- isn't possible in the Democratic Party. Bernie Sanders is bucking the establishment in much the same way Trump is, but his political philosophy is as consistent and clear as anyone currently running, whereas Trump offers nothing in the way of content.

It's worth asking why that is? Why, in other words, do Trump  and — gaseous celebrity candidates like Sarah Palin — seem only to gain traction in the Republican Party? Williamson is right to note the successful sloganeering of candidates like Bill Clinton and President Obama, but both of them articulated actual ideas and policies, whether you agreed with them or not. Trump's platform ends at "Make America Great Again." The rest is noise and half-uttered grievances.

The answer, I suspect, is buried in Williamson's article, which is really quite interesting. It's not that conservatives don't read; it's that they only read or listen to people like Mark Levin or Sean Hannity or Rush Limbaugh, who are conservative entrepreneurs profiting from the blinkered rage feeding Trump's campaign. They don't propound a serious or coherent worldview because they don't have one; they're entertainers chasing ratings. These are the forces behind the Tea Party movement; they define the Republican Party now, and there's no functional equivalent on the left.

I'm deeply sympathetic to Williamson's argument, but you can't lament the death of intelligent discourse in this country without conceding that one party -- and the media-industrial complex supporting it -- is more responsible than the other. The GOP is the party of Fox News and talk radio now, not the National Review, and that's a huge part of this story.