"It’s well beyond the Oscars": Variety takes a stand on Hollywood's diversity problem — that will only change "when the bottom line is affected"

Salon speaks to the reporter behind Variety's powerful cover story on race, Hollywood and the academy 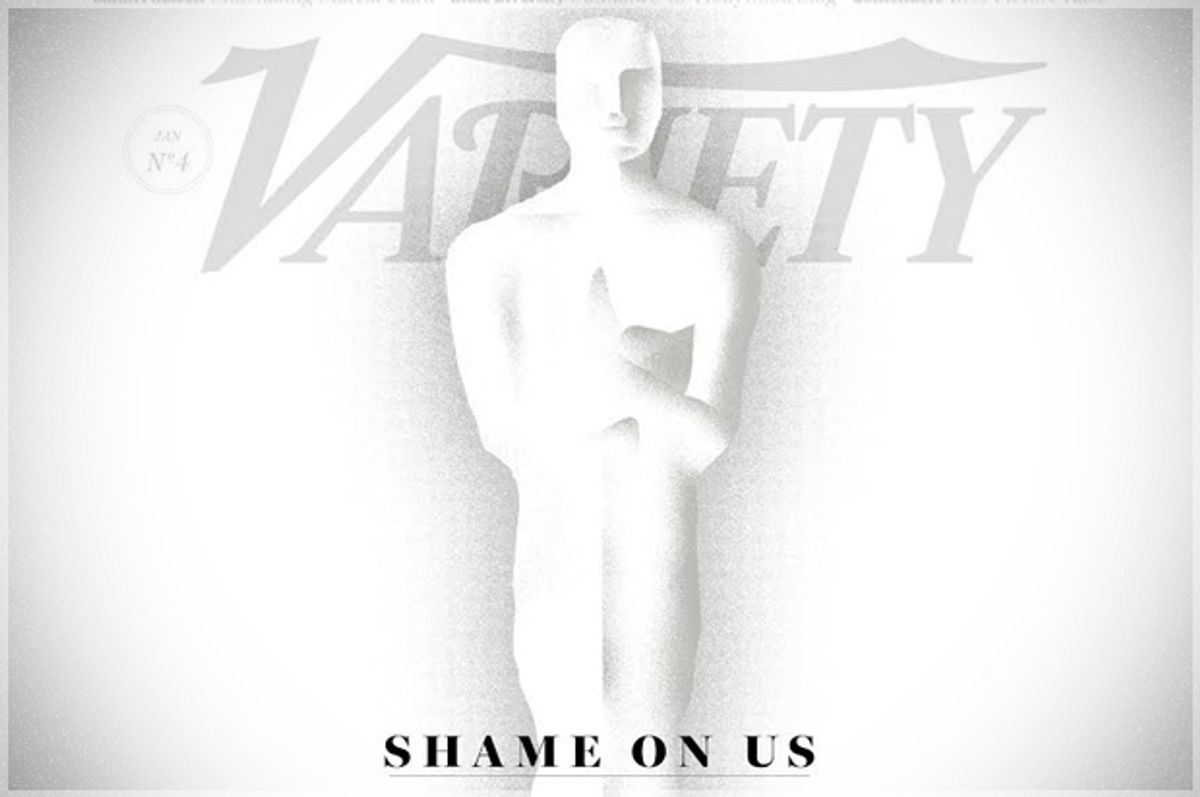 The movement for diversity in the Oscars just received a push from deep inside Hollywood: the new Variety cover with the phrase “Shame on Us” spread across an image of an Oscar statue. Inside, the expansive, well-reported story begins this way:

In 2015, America’s age-old struggle over civil rights centered on police violence. Gunshots too often killed unarmed black citizens — and the African-American population exploded with indignation, no longer willing to abide the status quo.

This year, the nation’s battle over identity and inclusion has found a new focus: Hollywood. The tipping point arrived with the Jan. 14 unveiling of Oscar nominees, a list as white as the Social Register, circa 1950. The announcement by the Academy of Motion Picture Arts & Sciences — revealing that every one of the 20 acting nominees was white, incredibly, for the second consecutive year — has filled the Twitterverse and cable talk shows with outrage, plunging the Academy into crisis. The lack of diversity has dominated the conversation, from the executive suites at Disney to the hallways of CAA.

The story interviews studio heads and activists, and traces the issue back to an imbalance in the 1970s and a protest led by Jesse Jackson in 1996.

Salon spoke to Variety reporter James Rainey about the story and the larger problem of race in Hollywood. The interview has been lightly edited for clarity.

The debate over this has been whether the problem is with the academy in particular or with Hollywood in general. Which is it?

I think the problem is with all of us – not just the industry and Hollywood, but there is a long way to go for a lot of minority groups, underrepresented groups, to have their place in the American economy. And in this case, in Hollywood. So it’s well beyond the Oscars.

You can get into certain categories, certain performances, and see that work that should have been recognized with nominations. But I think the more important debate, as Spike Lee said at the outset, is with who’s making the decisions in Hollywood, and whether they are trying to make TV and films that look like America. I think it’s pretty clear for a lot of groups that they aren’t accomplishing that.

Does the problem seem to be with all films? With prestige films? How does it differ by genre?

I guess it’s with the prestige films and the big studio films. There are independents that have a wider array of ethnicities and races represented. But it’s everywhere in Hollywood. It’s at the talent agencies, in the studio hierarchies, it’s true here – as I pointed out in the story – here at Variety. We’re a mostly white newsroom here. It’s throughout the industry. If you don’t keep after this goal, inertia is a powerful thing, and it will win the day if you don’t make a conscious effort to change things.

Your piece started by referencing the violence against unarmed black men that led to the BlackLivesMatter movement. Do you see a connection between this and the outrage over the Oscars?

I think maybe so because there was clearly, with all those shootings and all those protests, most pronounced in Ferguson, Missouri, people reached that breaking point: People were not going to do it anymore. It was just too much.

And this being the second year in a row with the Oscar acting nominees being all white there was a kind of... “Really? In each of the last two years there have been 20 nominees, and then 20 more, so a total of 40 nominations, and not a single actor who’s not white who deserves nomination for recognition?” It’s pretty easy to see the indignation over that.

It’s interesting that while there’s been an outpouring on this from a lot of quarters, you haven’t seen – that I know of – a prominent director, actor, cinematographer from the Latino community speak out. They’re a substantially bigger proportion of the population, growing faster than other groups. Kind of interesting that as a group they’ve been less outspoken. I think the same is true of Asian-Americans.

Spike Lee gets the ball rolling. As our story points out, it’s a discussion that’s ripe to be had. But it goes way beyond African-Americans.

Academy president Cheryl Boone Isaacs has said the academy can lead on the issue – is it able to do that? They’ve proposed some new rules, for instance, about membership.

I think maybe they can. Even Spike Lee and some of the people who’ve been the most outspoken have been careful to credit Isaacs with meaningful steps in that direction.

It’s fairly dramatic what they did – this move to say that academy members who haven’t worked in 10 years will go into non-voting status. I know some people pretty well, including a family member, who’ve been in the academy and maybe have had a gap like that, and think they’ve put in decades of hard work to be in the academy. There’s going to be some blowback on that.

At the same time, what do you want your organization to be? Do you want an organization of elders – mostly white elders – or do you want a more contemporary organization of people who are active at the moment? By that change in the bylaws, it will over time become more of the latter. That may serve the academy well, not just in terms of ethnically and racially. But it may bring in more diverse kinds of films. For instance, this year it might have gotten “Star Wars” a best-picture nomination if you’d had a younger voting group.

It’s going to take time, because it’s not like those people will be culled immediately. It’ll be interesting to see the impact of that over time.

There are more chances of changes in the academy than changes in the upper echelon of the studios or of the talent agencies – the two other big institutions that I think are more in need of more, as Spike Lee would say, “flava.” More color in the top ranks.

There’s a new profile of Samantha Bee in New York magazine in which she talks about a blind process of staffing her writing room. Have you heard of any talk about people in Hollywood doing that to fill in the behind-the-scenes positions?

I think ultimately, what has to be shown to this industry, just like any other, is that this isn’t just a case of affirmative action – it’s a business decision. You can look at the shows and films that have performed really well – a show like “Empire” that’s leading in the ratings – it’s going to take some lessons like that.

On the other hand, I’ve spoken to people in Hollywood who – every time a show like “Empire” succeeds – say, “Oh, that’s a one-off, that’s an anomaly, we can’t do that all the time.”

You’re starting to see that more in TV than you are in film – people who see that there is a market there and that people will come and look at films with people of different stripes and colors. That’s what ultimately is going to move this in that direction. The profit motivation is always going to be the greatest. We’re still in a capitalist society, and the dollar is going to push everything. If there’s going to be change, that’s where it’s going to come from. The protests and outspokenness are important and can start the push. But ultimately it’s when the bottom line is affected that you’re going to see real change.