Chomsky concedes that Sanders is a better candidate than Hillary, but says the system is stacked against him 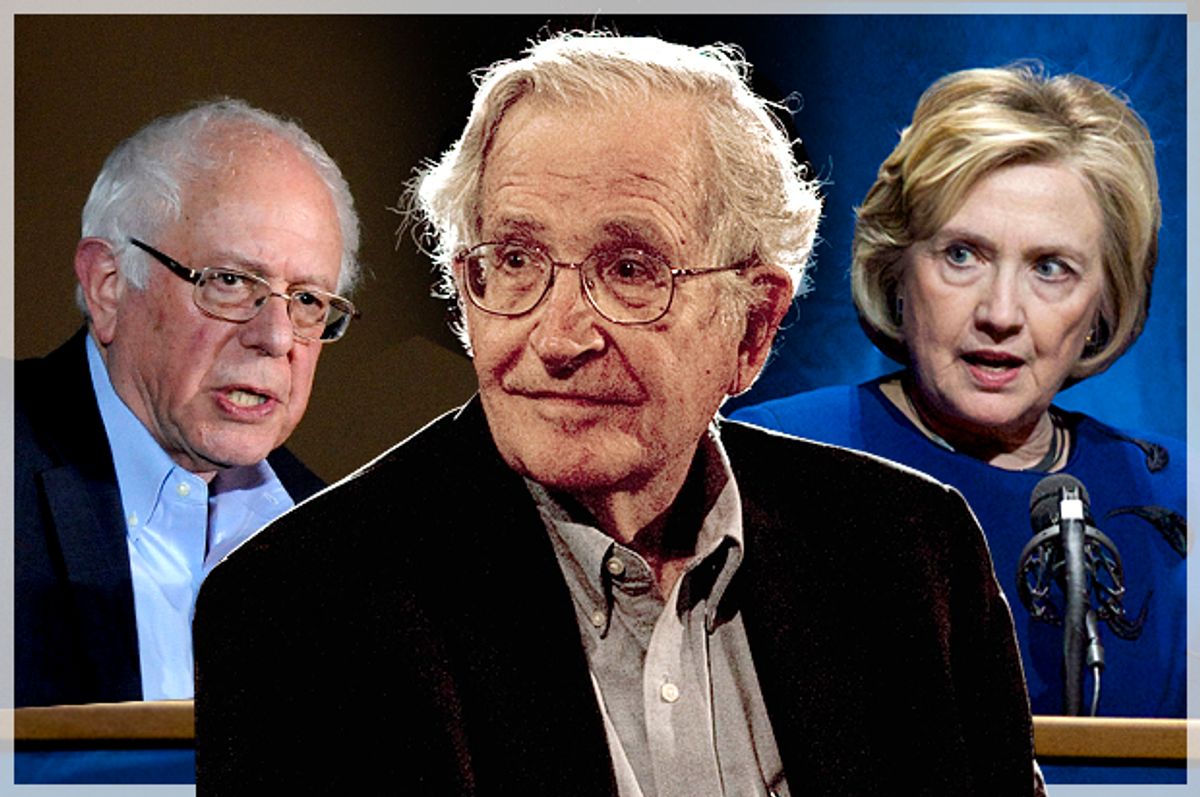 Noam Chomsky is famously cynical about America’s political process. The renowned linguist has argued for years that our campaign finance system and supine media make it virtually impossible for democracy to work. As you’d expect, Chomsky is not a Democrat or a Republican, the two parties being equally subject to the same corrosive forces.

He is, however, more aligned with liberal Democrats than conservative Republicans, and so it’s no surprise to learn he’s voting for a Democrat in 2016.

In an interview with Al Jazeera this week, Chomsky weighed in on a number of topics, including the presidential election. Given Chomsky’s history, you’d guess his preferred candidate in 2016 is Bernie Sanders. If there’s a recurring theme in Chomsky’s political thought, it’s that the prevailing power structure favors corporate interests and pollutes democratic institutions.

Dismantling this structure is the point of Sanders’ presidential campaign. Chomsky acknowledges this in his Al Jazeera interview, but his support of Sanders is rather muted: “I agree with him [Sanders] in a lot of things, not in other things. I frankly think that in our system of mainly bought elections, he doesn’t have much of a chance.” Chomsky continued: “If he [Sanders] were elected, I think he would – of the current candidates – be the one who would have, from my point of view, the best policies.”

Chomsky concedes that Sanders is the better candidate, but he doesn’t believe Sanders can win. Although the full interview won’t air until next week, Chomsky’s reasoning is familiar: entrenched interests drive the process, and to the extent that that’s true, Sanders is a long shot. (Even the most ardent Clinton voters will acknowledge that she is the preferred Democratic candidate among the corporate class.)

Sanders supporters will object to Chomsky’s point here, a point Hillary Clinton and popular pundits never tire of making. Chomsky’s pessimism might be uninspiring, but it’s not necessarily misplaced. I’m more sanguine about Bernie’s prospects: He’s surging in the polls, shattering records for individual donations, and slowly puncturing the fatalistic narrative surrounding Hillary’s campaign. But until or unless Sanders proves he can win beyond Iowa and New Hampshire, his long-term viability remains an open question.

Interestingly, Chomsky was asked if he would support Clinton as the Democratic nominee, despite his lingering doubts. His answer was straightforward: “Oh absolutely … My vote would be against the Republican candidate. There are enormous differences [between the two parties]. Every Republican candidate is either a climate change denier or a skeptic who says we can’t do it. What they are saying is, ‘Let’s destroy the world.’ Is that worth voting against? Yeah.”

While hardly novel, Chomsky’s defense of Clinton is reasonable. It's true that Clinton is not a progressive candidate – her record proves it. And yes, Sanders is the only authentic populist in this campaign. But if progressives are forced to choose between Hillary Clinton and any of the Republican candidates, they’d do well to choose Clinton. She is competent and preferable to every Republican alternative. And she is on the right side of a number of issues liberals ought to care about, like climate change and women's rights.

Chomsky is too quick to dismiss Sanders' chances in 2016, but he's absolutely right about Clinton.