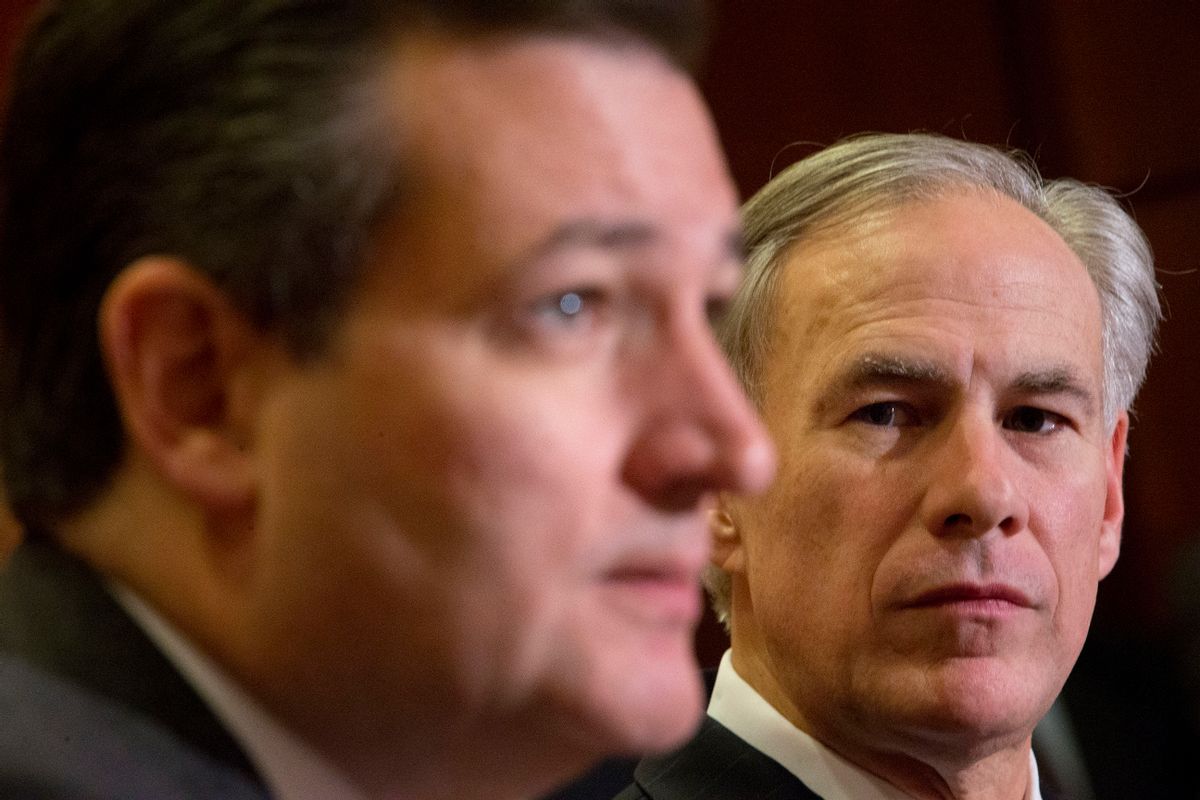 Texas Gov. Greg Abbott. right, listens to Republican presidential candidate Sen. Ted Cruz, R-Texas, left, speak about the resettlement of Syrian refugees in the U.S., during their joint news conference on Capitol Hill in Washington, Tuesday, Dec. 8, 2015. Abbott was in Washington with Cruz to support a bill Cruz has introduced in Congress banning any refugees from Iraq, Syria or other countries deemed to be controlled by a foreign terrorist organization. (AP Photo/Pablo Martinez Monsivais) (AP)
--

I was covering a committee hearing in the Texas House 25 years ago when a legislator asked a witness an interesting question:

“Are there any unintended consequences we’re not anticipating?”

At the time, Texas Lt. Gov. Dan Patrick, swept into office by evangelicals and Tea Partiers in 2014, was the host of a Houston-based radio program and owner of a sports bar. So he probably wouldn’t recall that question posed by the West Texas Republican legislator the late Molly Ivins once referred to as a “Bible-thumping dwarf from Pampa.”

Though it was perfectly tautological, it’s a question that Lt. Gov. Patrick might have considered before demanding that Houston’s district attorney investigate Planned Parenthood, in the wake of the sting videos produced under false pretenses by antiabortion activists David Daleiden and Sandra Merritt.

The pair, from the Center for Medical Progress, an antiabortion organization founded by Daleiden, posed as representatives of BioMax Procurement Services, a fake biomedical research company. They interviewed Planned Parenthood executives, offered to purchase fetal organs, then deceptively edited the videos and released a series of them starting last July.

Patrick (who defines the extreme right in a right-wing state), Gov. Greg Abbott (who as an Opus Dei variety of Roman Catholic harbors a deep personal fanaticism regarding abortion and contraception), and Attorney General Ken Paxton (currently under indictment for securities fraud) all demanded investigations. On all fronts.

But Patrick insisted that Houston’s D.A. begin a criminal investigation of Planned Parenthood. He had represented Houston in the Senate. He knows Devon Anderson, the Harris County (Houston) D.A. appointed to fulfill an unexpired term by former Gov. Rick Perry, when her husband died in office in 2013. And Anderson, who has tried more than 1,000 felony cases, including eight capital murder trials, has earned the “tough on crime” reputation that wins elections in Texas. (She’s unopposed on the March Republican primary ballot.)

Furthermore, Houston was the scene of the “crime,” where the two BioMax “representatives” walked into one of the city’s Planned Parenthood clinics and offered to pay $1,600 for organs from aborted fetuses. What could possibly go wrong?

Yesterday, Patrick found out. Anderson announced that a county grand jury found no wrongdoing by Planned Parenthood, and instead indicted Daleiden and Merritt for tampering with government evidence, a felony, and the illegal purchase and sale of human organs, a misdemeanor. The record-tampering charge stems from a grand jury finding that Daleiden and Merritt made and presented fake California driver’s licenses with intent to defraud, which can result in a prison sentence of two to 20 years.

The response was predictable. The lieutenant governor released a statement regarding his plan gone bad, saying, “The horrific nature of these videos demand scrutiny and investigation.” However, it appears that they were scrutinized and investigated for several months by Houston’s D.A.

He added a few lines of antiabortion boilerplate, including: “The recent anniversary of Roe v Wade decision is a solid reminder of the over 50 million innocent lives that have been lost to abortions.”

For Gov. Abbott, it ain’t over until it’s over.

“The Health and Human Service Commission’s Inspector General and the Attorney General’s office have an ongoing investigation into Planned Parenthood’s actions,” he said in a statement. “Nothing about today’s announcement in Harris County impacts the state’s ongoing investigation. The State of Texas will continue to protect life, and I will continue to support legislation prohibiting the sale or transfer of fetal tissue.”

In other words, investigations will continue in agencies under the control of executive directors appointed by the governor and the state’s elected Republican A.G.

Attorney General Paxton took a break from trial prep for his own criminal case to join the governor and lieutenant governor, saying, “the videos exposed the horrific nature of abortion and the shameful disregard of human life in the abortion industry.”

District Attorney Anderson hasn’t released complete details of the indictment, though we obtained an unofficial copy of Susan Merritt’s felony charge, with bond set at $10,000.

The Texas law imposing unprecedented restrictions on abortion clinics is currently on the docket of the U.S. Supreme Court.

And Texas Sen. Ted Cruz again promised in Iowa that the second thing he will do on his first day in office “is instruct the Department of Justice to open an investigation into these videos and prosecute Planned Parenthood for any criminal violations.”