Marco Rubio is not a moderate: If the Florida senator represents mainstream conservatism, the GOP is screwed 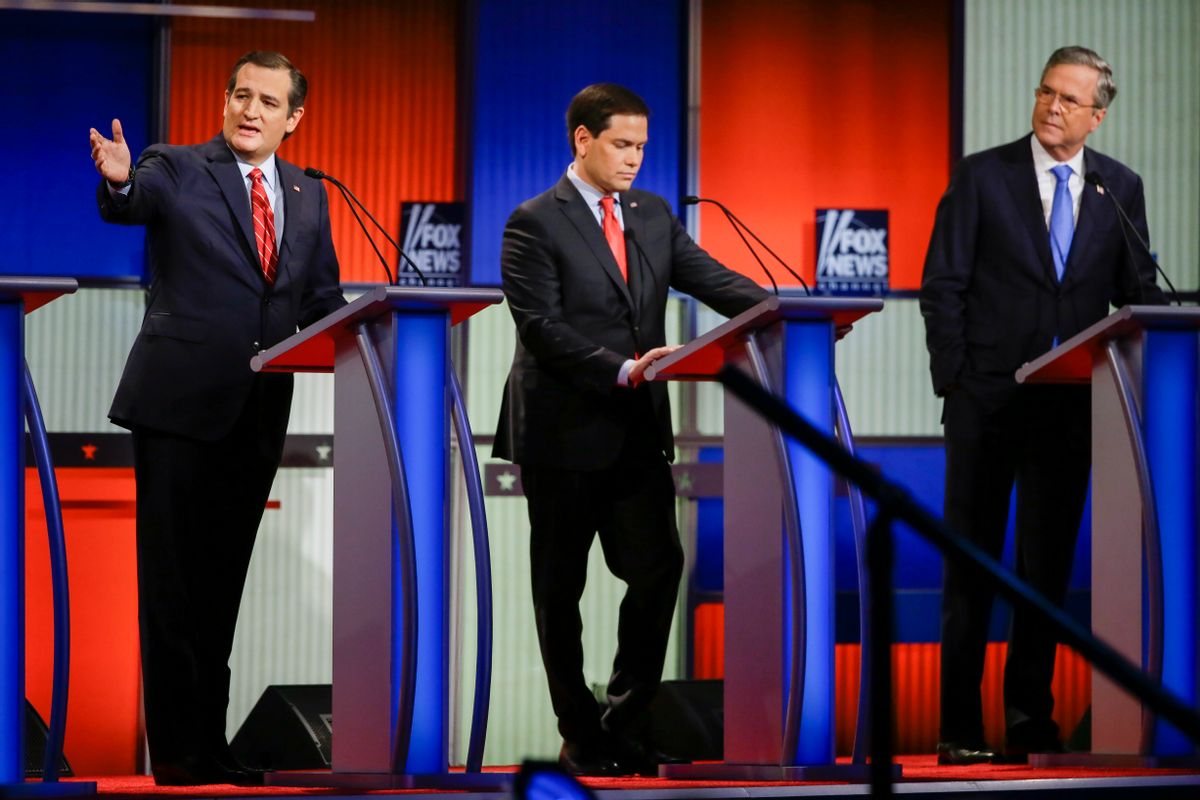 Marco Rubio has become the darling of the Republican establishment. Jeb's implosion is partially responsible for this, but there is also a belief on the Right that Rubio is the best “mainstream” candidate in the field. If that's true, if Rubio represents moderate conservatism, the GOP is in serious trouble.

Apart from his fresh face, virtually nothing about Rubio is new or endearing. His ideas are either conventionally Republican or uncommonly extremist. On foreign policy, Rubio is a rabid neoconservative. He wants to double down on the Bush Doctrine; he's surrounded himself with neocon advisers; he supports the government's unconstitutional surveilance program; he's pro-torture; and he wants to dramatically increase defense spending even though America spends more on defense than the next eight nations combined.

On domestic and social issues, Rubio is no less extreme. Against the backdrop of record inequalities, he wants to reduce federal revenue and give the top 1% a massive tax cut (which would explode the budget). Like every other Republican, he wants to repeal Obamacare without offering a viable alternative to the millions of Americans who now have health coverage. He supports a ban on all abortions, including cases of rape and incest. And he wants to undo Obama's executive orders protecting LGBT citizens from marriage discrimination.

Thursday night's debate was yet another illustration of Rubio's faux moderation. If you cut through the canned rhetoric and listen closely to what he's saying, Rubio sounds like a meat-tossing fanatic. His mini-monologues are either outrageous or patently false. In his opening remarks, Rubio trotted out his line about Obama hating America: “You see, we usually elect presidents in America that want to change the things that are wrong with America. Barack Obama wants to change America. Barack Obama wants America to be like the rest of the world.”

What does that even mean? President Obama has said repeatedly that his story is only possible in America; that he symbolizes the American dream. This is the kind of platitudinous drivel that Rubio spews on the stump. Rubio added that Obama “systematically and habitually violates the constitution” and yet never explains what he means by that. It's just red meat for the Obama-hating dolts in the audience.

Rubio's remarks about terrorism and foreign policy were characteristically hysterical – and dishonest. “When I'm president,” he declared, “we are going to rebuild our intelligence capabilities. And they're going to tell us where the terrorists are. And a rebuilt U.S. Military is going to destroy these terrorists. And if we capture any of these ISIS killers alive, they're going to Guantanamo Bay Cuba, and we're going to find out everything they know.”

You see how easy national security is under a Rubio administration? You just instruct the folks at the intelligence agencies to tell us where the bad guys are – problem solved. What does he think the intelligence agencies are doing right now? Does he know they were used to find Bin Laden and countless other dead terrorists? Or does none of that matter because it occurred under a Democratic administration? And of course there's the throwaway line about sending terrorists to Cuba so we can torture them, about which he wasn't even questioned.

Rubio also went out of his way last night to dog whistle to Christian theocrats. In a delightful bit of pandering, he flatly denied America's secular roots (and smugly implied only Christians are generous):

“I think if you do not understand that our Judeo-Christian values are one of the reasons why America is such a special country, you don't understand our history. You see, why are we one of the most generous people in the world?...It is not because of the tax write-off. It is because in this nation, we are influenced by Judeo-Christian values that teach us to care for the less fortunate, to reach out to the needy, to love our neighbor. This is what's made our nation so special. And you should hope our next president is someone that is influenced by their faith...And whem I'm president, I can tell you this, my faith will not just influence the way I'll govern as president, it will influence the way I live my life.”

I've no problem with saying Americans are influenced by their faith, or even that most Americans are Christians (these are facts), but this is not a Christian nation; it's a secular republic. God is not mentioned in the Constitution and the Declaration of Independence says clearly that government derives its authority from the consent of the people - this is what makes America a special nation, historically and politically. There are plenty of countries with majority Christian populations, just as there were theocracies long before America was invented. This idea that we need a religious litmus test for our president is unconstitutional and pandering of the worst kind.

But this is the kind of rhetoric Rubio employs. Perhaps someone told him he has to do this to win. Whatever the case, Rubio's youthful exuberance masks his old and regressive ideas, and the fact that he talks constantly about a “new American century” helps to conceal how utterly banal his campaign is. He represents the worst instincts of movement conservatism, and if his warmongering and tax cuts for the wealthy are what counts as moderate in today's GOP, the Democrats should feel awfully good about their chances in 2016.