Cecil is the least of it: 6 grisly facts trophy hunters don't want you to know 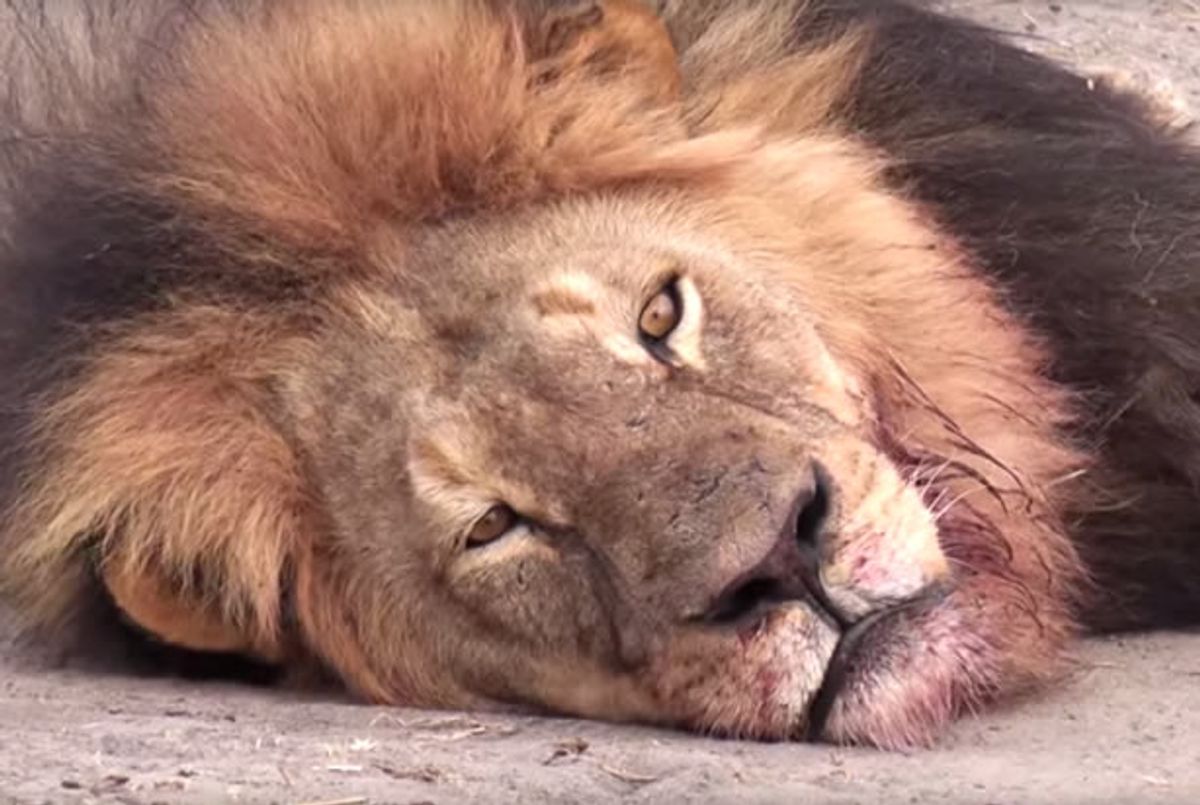 The killing of Cecil, an African lion in the Hwange National Park in Zimbabwe last July by the Minnesota dentist Walter Palmer focused national attention on the flourishing but underreported world of big-game trophy hunting. Outrage from the public, conservationists, politicians and celebrities led the U.S. Fish and Wildlife Service to add Cecil’s species to the endangered list and many airlines stepped up and said they would refuse to ship the trophies home. But even though the Cecil episode has opened the public’s eyes, there are many grisly aspects to the so-called sport that trophy hunters would rather you didn't know. Here are 6 of them.

1. Trophy Killing Goes All the Way to the White House

Palmer, the man who killed Cecil the lion, is in good company with public figures and political leaders. President George H.W. Bush, former Vice-President Dan Quayle and the late Retired Gen. Norman Schwarzkopf Jr. were proud members of Safari Club International (SCI) which sponsored Palmer's lethal deed and which AlterNet recently reported on. These men demanded that the Botswana government keep trophy lion hunts available for trophy hunters and they are widely believed to have killed lions themselves on safaris. Rich Americans, Europeans and Japanese have slaughtered so many mature male lions in Botswana that trophy hunters use a "mane-extension service" to make the immature lions they kill look more fierce for mounting by weaving fake hair onto them, reports the Guardian.

In 2012, the King of Spain enjoyed killing an elephant (to the horror of his subjects) and the year before, the CEO of Godaddy.com, Bob Parsons, videotaped his own killing of an elephant. Last summer, Jimmy John's founder and CEO Jimmy John Liautaud posted photos of himself posing with elephants, a rhinoceros and a leopard he had killed. Some are boycotting the chain. Donald Trump’s sons, Donald Jr. and Eric, also like to trophy hunt and have posed with an elephant, leopard, crocodile and other animals they killed in Zimbabwe. (Dad defends them as “great shots, they love it.")

Palmer himself posed with at least two other "trophy" animals before Cecil, flashing the same "Aren't-I-a-he-man?" grin. In January, a woman who confessed to spray-painting the words “perv” and “scum” on the sign of Palmer's River Bluff Dental practice was only given probation, suggesting that even the courts are disgusted with Palmer's brand of senseless killing.

2. Safari Club International Is Even More Warped Than You Think

Unlike hunting groups that give lip service to conservation or skill, SCI "glorifies a culture of death," says Sea Shepherd's Paul Watson. It holds extreme killing derbies that celebrate slaughter like, the "African Big 5" club, in which hunters try to kill a lion, leopard, elephant, African buffalo and rhinoceros, and the "African 29” club, in which hunters kill 29 different animals including a lion, leopard, elephant, rhinoceros, hippopotamus, buffalo, three kinds of antelopes, a wildebeest, impala, gazelle and many more. There is also a club for "hunters" who have killed more than 300 species on six continents.

In 2006, SCI defeated an amendment to the Marine Mammal Protection Act in the House of Representatives that would have banned the import of sport-hunted polar bear trophies from Canada. Since Cecil, 30 airlines have refused to ship big-game trophies.

SCI has programs to extend the fun of killing to physically incapacitated hunters, even if the animals have to be baited or held in position to be shot. On its website, SCI boasted how its Safari Wish program enabled a spina bifida patient to kill a greyhound-sized young doe from his wheelchair. The young man missed two hogs eating at a feeder and likely baited but got the doe because “the Hunt Club suspended the deer harvest rules for his hunt,” said SCI.

In an attempt to look altruistic, SCI seeks to give the poor and hungry the carcasses its hunters never want to eat in the first place. But in 2008, health officials told food pantries to reject the meat because of lead fragments from bullets, leaving SCI with 317,000 pounds of meat "harvested" for no reason. "This is disheartening, and we certainly don't think this program should come to an end on the unscientific assessment that has occurred here," lamented SCI lawyer Doug Burdin.

3. They Don't Have to Go to Africa to Kill a Zebra

There is so much money in shooting exotic animals that trophy operations have sprung up in the U.S. "Hunters" can shoot zebras and other exotic animals at operations like Circle E in Bedias, TX and Heartland Wildlife Ranches in Ethel, MO for as much as $6,500 a head. "Hunters come from across the country to take aim at trophy animals," including zebras, reported the St. Louis Post-Dispatch. A three-day hunt for water buffalo at the Heartland costs $4,000.

A chilling expose in the Washington Post says that hundreds of exotic trophy operations exist in Texas alone, "some of which offer opportunities to bag or buy such unusual prey as Russian boars, nilgais, barasinghas, oryx, zebras, giraffes and wildebeests." Unless the species is endangered, federal authorities will not regulate such operations, says the Post. In one case an operation was cited because "staff members apparently used dart guns to tranquilize animals, then herded them toward hunters for the kill," said the Post—but the charge was not about ethics: the tranquilizing substance was apparently illegal.

Owners of such exotic animal operations, which are backed by SCI, say those with ethical objections are trying to deprive them of their livelihoods. "These animals belong to me. I should be able to do with them what I want," Charly Seale, executive director of the Exotic Wildlife Association, the exotic ranches' trade group, told the Post "The government just shouldn't be telling us what we can and can't do with them."

During the 2008 presidential election, former New Mexico Governor Bill Richardson floated a picture of a long-horned, African antelope called an oryx that he killed on Ted Turner's Armendaris Ranch in New Mexico. Richardson killed the oryx with one shot from 100 yards on a "guided" outing, he bragged. Photos show Richardson kneeling beside the antelope, a fence clearly behind him.

The number of exotic trophy ranches pales next to the number of deer trophy ranches in the U.S.. which breed animals with antlers sometimes twice as large as animals in the wild. Hunters pay $10,000 or more to shoot a farm-raised trophy buck, reports the Indianapolis Star.

"Don't call them hunters," wrote Port Huron Times Herald reporter Mike Eckert after viewing videotape from one such a game farm. "The enclosure wasn't bigger than my back yard. Sick and dying deer were propped in front of killers who paid thousands of dollars to shoot them. For customers who were really slow to aim and shoot, deer were drugged."

A letter in the Houston Chronicle agrees that such shooting is not "hunting," lamenting that deer in such operations are simply seen as "objects or commodities and not as wildlife with deep, multifaceted intrinsic values." Recently, said the letter writer, a poacher or poachers killed and decapitated a tame white-tailed buck so they could remove and mount its antlers.

After a shocking, four-part probe about such deer farms in the Indianapolis Star, state Sen. Pete Miller introduced legislation that would ban the operations. State wildlife officers also sought a ban, but were overruled in court. The fight to keep "high fence" hunting legal by those who profit from it has been going on for 10 years in Indiana.

A bill last year that sought to set regulations for the controversial industry contained an eerie admission of drugging animals: it stated that owners of Indiana's many fenced hunting operations would be forbidden from selling a deer for a hunt "within 24 hours of it being sedated." The bill did not pass last year, but is back this year.

Recently, the Indianapolis Star explored how “the pursuit of deer bred for enormous antlers and shot in hunting pens” on trophy farms is spreading a terminal disease similar to Mad Cow, called chronic wasting disease (CWD) at an alarming rate. State Departments of Natural Resources (DNR) dispute that CWD is harmful to humans yet issue elaborate guidelines about what parts of the deer are "safe" to eat. In 2002, a report from the CDC suggested by its title—“Fatal Degenerative Neurologic Illnesses in Men Who Participated in Wild Game Feasts, Wisconsin, 2002”—that dangers do exist.

Over 10 years ago, Wisconsin experienced a CWD epidemic in which thousands of decapitated deer were stored in refrigerated trucks in La Crosse while being tested for CWD. Hunters were afraid to eat the deer they had shot and family members were even afraid to wash the blood-soaked clothing. (Like Mad Cow, CWD is spread through bodily fluids like blood and saliva.) Food pantries refused the deer meat, which some suspected the hunters didn’t trust to eat themselves. Later pantries accepted the venison, but attached a flier for pantry clients saying there was a slight chance the meat could kill them.

Since then, Wisconsin’s CWD eradication efforts have failed abysmally and this year hunters are again awaiting the results of decapitated deer before eating them. Other states also fear a CWD epidemic. DNRs consider deer trophy ranch operations clear CWD vectors because of their cramped conditions (causing urine and saliva exposure), animal trading (which bring risks from out of state), escaped animals, and “unknown feed” sources. News of deer "culling" on such trophy operations surfaces regularly and some sports writers think states are in concerning denial.

“The world’s most ‘disturbing,’ ‘frightening’ and ‘unprecedented’ CWD case is growing next door to our capital and flagship university, and our government won’t crack a window to sniff it,” wrote outdoor reporter Patrick Durkin in 2013.

6. Unethical Hunters Can Be the Guy Next Door

What is unethical hunting? Most say it rests on three factors: the species killed, why it's killed and how it's killed. For example, deer do not hold the same place in the public's heart as lions, but killing either animal simply to be trophies strikes many as wrong. Moreover, drugging an animal or denying it means of escape by fencing it in strikes many non-hunters and hunters alike as sickening and unsportsmanlike. Such killing may even represent the mental disorder of sadism, some psychiatrists say.

Many were disheartened when Madonna was reported to be inviting people to her Ashcombe House to blast away at pen-raised pheasants from France, Dick Cheney style. Killing semi-tame, pen-raised birds that have never learned to fly hardly qualifies as a sport.

In 2006, Country and Western musician Troy Lee Gentry killed a penned pet bear named Cubby on videotape in order to appear the tough guy. The ruse did not work. Music critic Peter Grumbine wanted to know if Cubby had "rolled on his back expecting his usual belly rub that followed his afternoon nap," before Gentry killed him. Others called Gentry a "sad pantywaist" who "shoots caged animals." The remarks are similar to what people are saying about Cecil's killer, Walter Palmer, today.