This is how far the GOP has sunk: A last-minute look at the bizarre, ludicrous, frightening fight for Iowa

Donald Trump holds a 5-point polling lead in the Hawkeye State. How'd we get here? And where do we go from here? 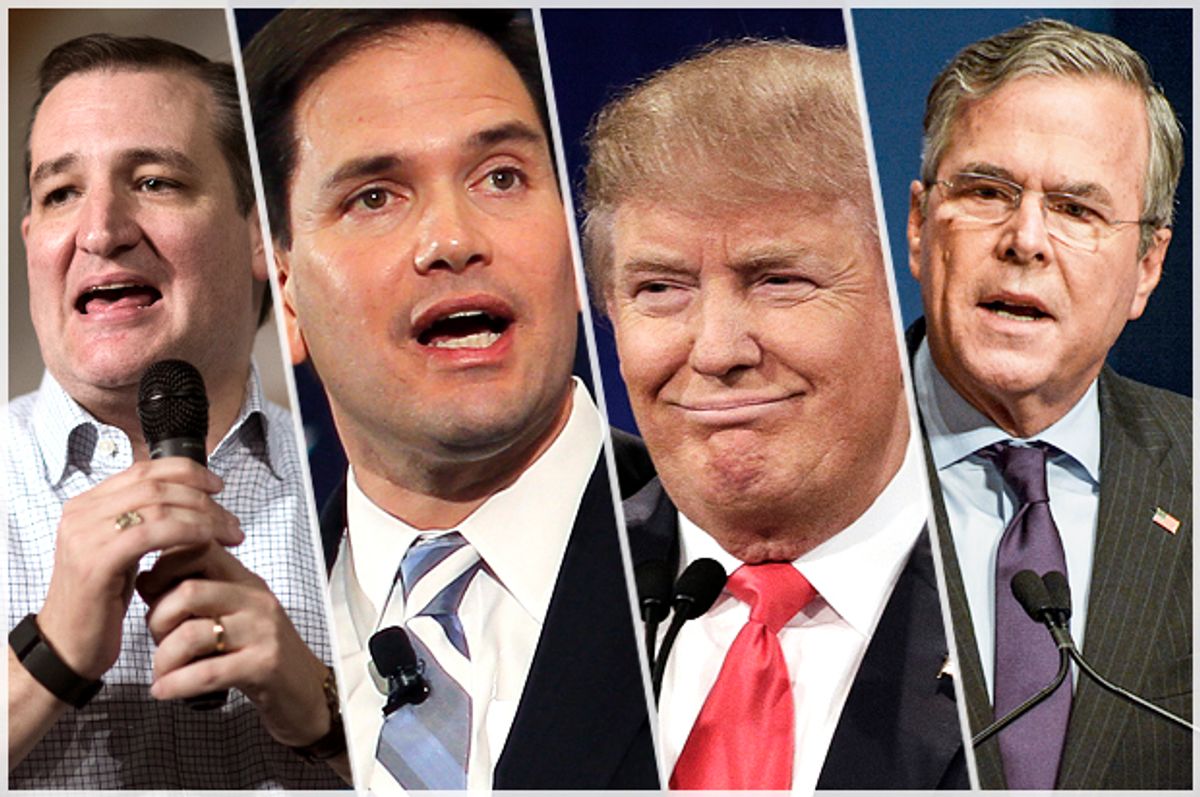 It seems as though every one of America's political journalists and pundits is in Iowa right now. The cable networks have countdown clocks and panel discussions and detailed rundowns of weather patterns and past caucus results. They all say it's about turnout, turnout, turnout. In the Democratic race, the gold standard Des Moines Register poll has Clinton up by three and in the Republican race it has Trump up by five, so the race is close on both sides. The two outsider candidates, Trump and Sanders, are going to need a big turnout, which would include many of the first time caucus goers who support their campaigns. In a somewhat ominous sign for both, the registration numbers have not increased much for either party, and although there is same day registration, the Iowa hands all point out that the Obama upset was presaged by very substantial registrations of new Democrats for months ahead of time. Whether that means anything for this time, it remains to be seen, but some of the Iowa talking heads think it might portend lower turnout than the two outsider candidates need.

As we wait for the results it's worth taking a look at the last ads by the candidates in order to see exactly what they believed was their best argument going into this first contest.

Donald Trump hasn't "wasted" a lot of money on ads and so far it doesn't seem to have hurt him. It helps that all the news networks hang on his every word and often show his rallies from beginning to end. At one point he had promised to spend 2 millions dollars on ads in Iowa, but that doesn't not seem to have materialized. He ran that Pete Wilson-style anti-immigration ad at one point, but now it's even disappeared from his website. In this final month he did put out one sharp and effective ad against Ted Cruz's immigration record. Say what you will about Trump he knows which side of his white bread is buttered on.

Since before the campaign he's released Instagram videos opining on all manner of issues of the day. In recent days he's produced some YouTubes that open with martial music and a "Patton-esque" Trump logo. He stares at the camera and makes a short emphatic statement. Here's an example called "Unifying the Nation":

Our country is totally divided. There's so much hatred. There's so many problems. Our president was a terrible unifier. He was the opposite of a unifier. He was a divider. I will unify and bring out country back together. It's something I've done all my life. I get along with people. A lot of people don't know that about me. They don't think that's the case. That is the case. I built a great company by bringing people together.

I will bring our country together.

We will be unified.

We will be one.

We will be happy again

You'll recall that Kim Jong Un is among the very few people in the world for whom Trump has expressed admiration, so perhaps he's been studying his style.

Ted Cruz, naturally, has taken a more traditional approach. Although he and Trump are locked in a close battle for first place, Cruz didn't run any ads against Trump in the final days. For once, it isn't based upon the dumb assumption that to run against him would ruin his chances to pick up Trump voters when he inevitably flames out. By this time people have recognized that Trump is The Teflon Don.

No, as Sahil Kapur at Bloomberg pointed out, Cruz is attacking Marco Rubio rather than Trump because according to the Des Moines Register poll, Trump voters are solidly with him, while Rubio voters are still subject to persuasion. If Cruz can seduce a few Rubio voters over to his side he might just edge out Trump.

Cruz's ads are pretty brutal. One attacks Rubio as "the Republican Obama" which is just this side of saying he's a secret member of ISIS. His attack on him for his "amnesty" vote is even worse:

That ad is so similar to Trump's anti-Cruz immigration ad, you have to wonder if it isn't going to end up benefitting Trump by showing both Cruz and Rubio as immigration squishes.

Rubio's campaign, for its part, has produced a 30-minute spot that he ran throughout the week-end in Iowa. (Here is an excerpt.) He talks a lot about his religious faith. A lot. Clearly his polling is showing that there is an opening for him with the evangelicals and he's really laying it on thick. It also features his regular stump speech pretty much promising that if you liked Dick Cheney and Don Rumsfeld, you're going to love President Rubio.

But never let it be said that Marco Rubio isn't inspirational. Besides his 30-minute infomercial, he also released a soaring paean to America (who hasn't?) and to his own youth and energy called "Tomorrow." But instead of a lovely heartland reverie like Simon and Garfunkle's "America"  he chose the moldiest song in the conservative repertoire, Lee Greenwood's "Proud to Be an American." It may work on Iowa Republicans once again, but at some point they're going to have to find another song:

It's a little odd that he interrupts a song about American patriotism with a lecture from the last debate about America's great failure under President Obama but that's characteristic of Rubio right now. He doesn't know how to synthesize his image as the optimistic bright young man of the future with the apparent necessity to portray the country as being the worst depths of depression. Trump's unabashed "America has turned into a unliveable hellscape in every way and I'm here to do whatever it takes to make it great again" looks a lot more convincing by comparison.

The rest of the field is just flailing about ineffectually. But it is important to note that Jeb Bush has gone all-out, spending more than any other candidate with at least $15 million in advertising (nearly $50 million nationally) and it's gotten him all the way up to 2 percent. But he is undeterred. He keeps cranking out the ads. A few days ago he brought out the big guns: mom.

Today marks the end of the beginning. It's been month after month of punditry assuming that Trump would finally commit the one unforgivable gaffe, that Cruz would sink into oblivion, that Rubio and Bush or some other "establishment"-friendly pol would emerge as the reasonable alternatives and the race would go back to normal. This did not happen. And that's because the GOP is not normal.

We've seen rifts exposed between the establishment and the conservative movement and new rifts opening up within the establishment and conservative movement. Great GOP institutions from National Review to Fox News have been attacked and left undefended. The Republican Party is under tremendous stress and nobody knows how it's going to come out. Finally, the only people who really matter in all this are going to weigh in for the first time and then we'll get our first confirmation of just how radical the GOP electorate has actually become.