U.S. militarism escalates: Despite promises of no boots on the ground, we have thousands of troops in Iraq and Syria

There are 3,700 U.S. soldiers in Iraq — and the Pentagon wants more, as militarism grows in Libya and Afghanistan 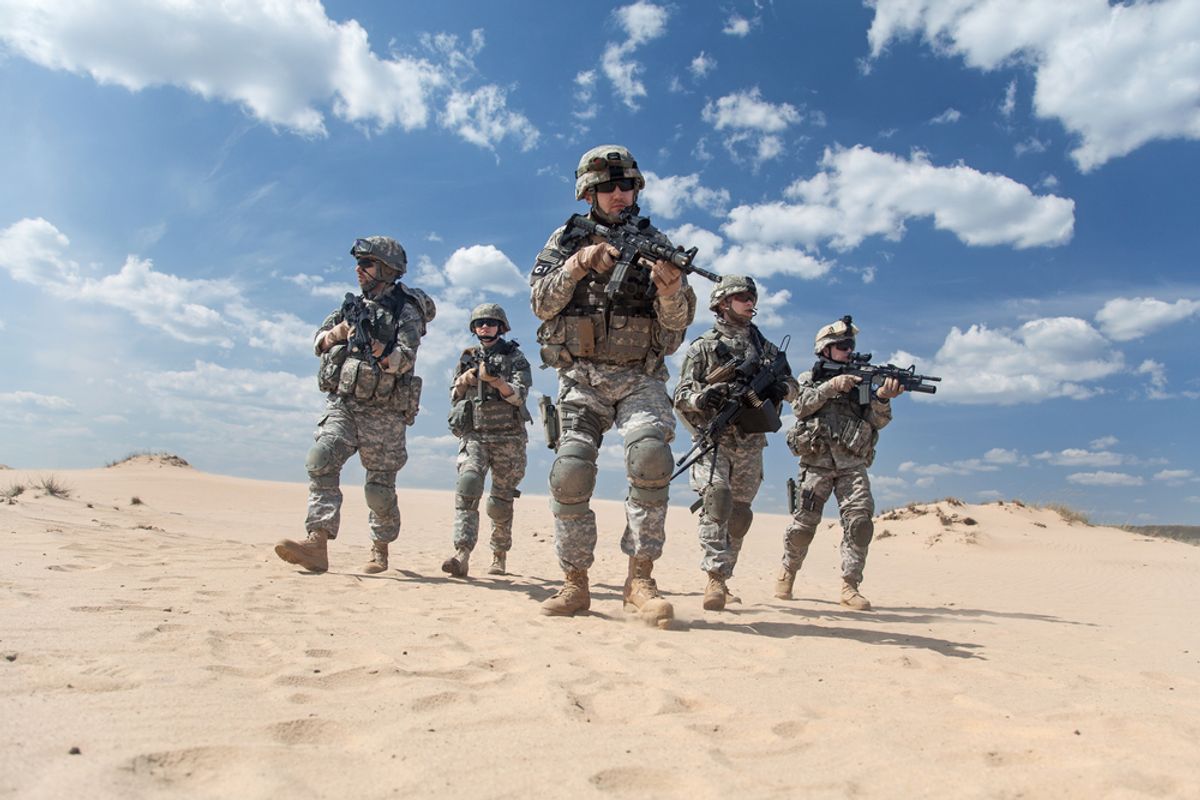 "The boots on the ground have to be Iraqi," President Obama insisted in a September 2014 interview.

"The resolution we've submitted today does not call for the deployment of U.S. ground combat forces to Iraq or Syria," he maintained in a speech at the White House in February 2015. Obama added, "As I've said before, I'm convinced that the United States should not get dragged back into another prolonged ground war in the Middle East."

"Local forces on the ground who know their countries best are best positioned to take the ground fight to ISIL, and that's what they're doing," he asserted.

Despite Obama's frequent insistence to the contrary, nevertheless, today there are thousands of American troops on the ground in Iraq.

The New York Times quietly noted in its Jan. 28 article "More Is Needed to Beat ISIS, Pentagon Officials Conclude" that 3,700 U.S. troops have been deployed to Iraq.

President Obama had promised dozens of times that there would be no U.S. troops on the ground in Syria. He then sent scores of Special Operations forces to Syria in late 2015.

In October, Defense Secretary Ashton Carter announced American troops were taking "direct action on the ground" against ISIS in Iraq and Syria. For months, he had denied that U.S. soldiers would partake in the fighting, yet later admitted the opposite. He said the U.S. military expects even greater involvement on the ground in the two countries.

An unnamed government official told the Times that the 3,700 U.S. troops in Iraq were gradually deployed over a year and a half — meaning that, while Obama was pledging to the American public that there would be no boots on the ground, his own administration was simultaneously slowly sending boots on the ground.

The anonymous official also told the Times that the Department of Defense wants to send in even more soldiers, increasing the number to more than 4,500.

"We're looking for opportunities to do more," Secretary Carter explained to CNN. Former Assistant Secretary of Defense Derek Chollet added "With more capacity, you can do more."

U.S. officials want other countries to deploy troops to help them, the Times reported, and have reached out to more than 40 countries.

This news is eerily reminiscent of reports from a decade ago. In mid-2006, AP indicated the U.S. command "was sending 3,700 troops to Baghdad to try to quell the sectarian violence sweeping the capital." The Washington Post likewise reported that 3,700 American troops in Iraq had their stay extended.

The escalation in Iraq and Syria comes at a time when the U.S. military is simultaneously increasing its involvement in both Afghanistan and Libya.

President Obama similarly broke his promise in Afghanistan, where he insisted countless times he would end the war by 2014. He was in fact reelected on this pledge, but announced in 2014 that the U.S. would be expanding its role in the war, and then again declared in 2015 that American troops would remain in the country until 2017.

In recent years, the Taliban has gained strength and seized more territory in Afghanistan. Since ISIS spilled into the South Asian country, some countries have even begun to see the violently repressive Taliban as an uneasy ally.

Just days after announcing the escalation of U.S. military intervention in Iraq and Syria, the New York Times indicated that the Pentagon is also ramping up its military campaign in Afghanistan, in the name of fighting ISIS.

Mere days before this, the Times also revealed that the U.S. is considering another war in Libya — once again, ostensibly to fight ISIS.

It was however the U.S.-backed NATO war in Libya in 2011, which was led by then-Secretary of State Hillary Clinton, that destroyed the government, creating a vacuum into which extremist groups like ISIS and Ansar al-Sharia entered.

Similarly, al-Qaeda was not in Iraq before the U.S. invaded in 2003, and ISIS did not even exist. The U.S. war in Iraq — which the U.N. explicitly said was illegal — destabilized the entire region. American policies, particularly support for Shia death squads based on its Salvador Option counter-insurgency strategy in Latin America, ignited a sectarian civil war, leading to the rise of Sunni extremist groups like ISIS.

The U.S. has militarily occupied Afghanistan for almost 15 years. More than 220,000 Afghans were killed in the first 12 years of the war, according to report by the Nobel Peace Prize-winning International Physicians for the Prevention of Nuclear War. At least 1 million more people were killed in the U.S. war in Iraq, in a conservative estimate in the same report. An additional quarter of a million people have died in the ongoing war in Syria, which is entering its fifth year.