The deck is stacked against Sanders' legislative vision. That doesn't mean his vision isn't of vital importance 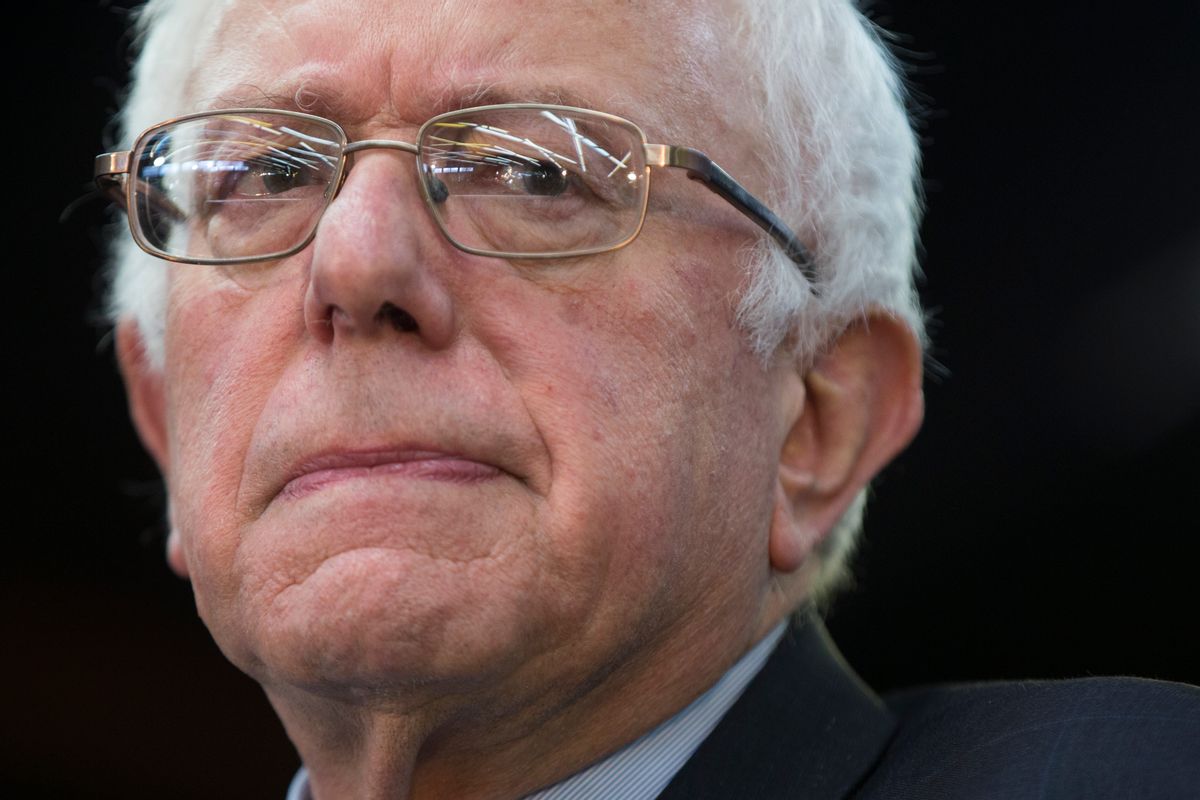 Much has been said and written about Bernie Sanders' ambitious legislative agenda, especially now with his closer second place finish to Hillary Clinton in Iowa. In fact, over the weekend, Clinton blasted Sanders' plan for single-payer healthcare, saying it'll "never, ever come to pass."

Of course, Clinton was being deliberately cynical about the long-term odds. When it comes to a healthcare system that’s already been established in a host of other western nations, never say never. But the fact remains that the reality of achieving even part of the Sanders agenda in the near term is a long shot.

In case you’ve missed it, Sanders’ top-shelf changes include: Building a single-payer healthcare system; breaking up the big banks by reinstating Glass-Steagall; pursuing income equality; and establishing free college tuition. For the left, as well as the millions of Americans who'd benefit from Sanders' agenda, these are all necessary and important goals to pursue. However, insurmountable political reality stands in the way of such sweeping changes.

Yet, other than the "unicorn and rainbow" snark directed at Sanders and his supporters, no one's really talking about exactly what needs to happen to make his agenda politically plausible.

It's easy to brush aside reality -- electoral math, the party divide in Congress and so on -- in pursuit of an awe-inspiring political revolution, and the Sanders campaign is all about inspiration. But it might help his cause to enumerate for his supporters precisely what needs to occur before single-payer and his other agenda items become viable. In other words, the engines in our slow-moving ship of state have to be repaired before there's a course-correction in pursuit of these new destinations.

Sadly, it’d require much more than a Sanders presidency on its own to achieve the Sanders agenda.

The following changes must take place before there's any realistic chance to achieve what Sanders and his voters are endeavoring to accomplish. Simply put: Bernie Sanders’ legislative goals are a nonstarter without the following changes, and these changes likely won’t occur within the term or two terms of a would-be Sanders administration.

In order to manufacture a legislative climate more favorable to the Sanders agenda, the strategic redrawing of congressional districts to artificially and exclusively favor one party or the other has to be eliminated. Finally.

Sanders' agenda requires Democratic majorities we haven't seen since, perhaps, the FDR administration when, at its high water mark, the Democrats held 333 seats in the House. Today, it's nearly impossible to reach that goal given the vast number of virtually uncontested Republican districts, due in large part to gerrymandering. (E.g., check out the funky shape of, say, the Pennsylvania 6th, which has been redrawn to include wealthy mainline Republican voters.) The caveat, naturally, is that gerrymandered Democratic districts would also be tossed into jeopardy and, ultimately, the Dem/GOP split could end up remaining mostly the same, given current events, candidate viability and so forth. However, by neutralizing the district playing fields, there's a greater chance of Democrats, in this case, sweeping to larger majorities than we've observed since 1941.

Bottom line: A massive Democratic majority in the House would allow for moderate and conservative Dems to vote with the Republicans, while leaving enough Democrats in the whip count to vote with a progressive administration.

Word of warning: Nancy Pelosi has already pledged that tax hikes Sanders proposed in his healthcare plan are a nonstarter and wouldn't enjoy the support of the House Democratic caucus.

On the Senate side, the filibuster is easily the biggest process hurdle standing in the way of a Sanders agenda. As it stands today, with the filibuster in place, Sanders would have to possess coattails massive enough -- almost unprecedentedly huge -- to give his adopted party at least 70-to-75 votes. Again, this would allow for blue dog Democrats to filibuster with the Republicans, which they'd surely do if single-payer and the accompanying tax cuts came to a floor vote, with 60 votes left over to break the GOP filibuster. Short of eliminating the filibuster, there's quite simply no way for Sanders to pass most of his agenda. And, to repeat, not since FDR has there been a Democratic Senate majority of more than 70 votes. (Close but no cigar: Presidents Kennedy and Johnson enjoyed Senate majorities with seats in the middle to upper 60s.)

Bottom line: As long as there's a filibuster, and as long as there are blue dog Democrats existing in red states, a progressive slate of changes as proposed by Sanders is practically dead in the water.

Words of warning: 1) Many Democrats would severely regret a loss of the filibuster during Republican majorities in the Senate. 2) If Sanders or a Sanders-like future progressive administration called to eliminate the filibuster would be excoriated as a cynical political move, pursued merely to facilitate a presidential agenda. Those critics would be correct, obviously. None of this is even to mention the fact that the president has no legal authority to challenge the filibuster. Any call from Sanders to influence the elimination the filibuster could be viewed as executive overreach in contravention of the separation of power.

Before any legislative items on Sanders' list are successfully passed, Citizens United has to be overturned by the Supreme Court and, following that, private campaign donations need to be banned, replaced exclusively by government funding of campaigns. Briefly put: With public financing, every candidate would receive a campaign stipend from the federal or state governments. The playing field would be financially uniform, and the influence of special interests would be almost entirely stricken from American politics, save for persuasive lobbying. It’s possible that Sanders could achieve the overturning of Citizens United by appointing Supreme Court justices who loathe that particular decision. Upwards of four seats on the Court could change hands during the next presidency.

Bottom line: The influence of money in politics would absolutely prevent Democrats, especially blue dogs, from voting with the Sanders agenda, given how drastically he intends to change the landscape of the financial and health insurance sectors of the economy. There's no way that Democrats who accept money from Wall Street and Big Healthcare, or candidates who represent states where those industries provide jobs, would support the elimination of the insurance industry and dissolution of Wall Street conglomerates.

Word of warning: Public financing of elections is an extreme but necessary long-shot. It'd also mean that unions and other liberal money would be cut off. It's difficult to know what the repercussions would be with either party.

Seismic changes such as dissolving the filibuster or fairly redrawing congressional districts will all but necessarily require more time than the length of a Sanders presidency. This of course does not mean that such an agenda could never be realized. What Sanders provides in any eventuality is a sense of viability for far-left candidates, moving the Overton Window leftward for the first time in at least a generation. This is important. The Sanders campaign is a crucial first step in a long line of future progressives stepping forward and proposing changes that heretofore were laughed off as impossible.

Bottom line: The results of the Iowa caucuses and the forthcoming New Hampshire primary will surely help facilitate these goals. Sanders’ odds of becoming the nominee have certainly received a substantial boost. The better he does, the easier it’ll be for progressives to win, up and down the ballot. That makes the Sanders campaign vitally important for the future of progressive change. The very nature of talking about single-payer, or talking about overturning Gramm-Leach-Bliley thus reinstating the rules under Glass-Steagall, makes it easier for center-left Democrats to talk about all of it. Even now, Hillary Clinton is adopting much of the Sanders language about Wall Street and income inequality, and Sanders is responsible for making it happen.

To be perfectly clear, accomplishing the above series of changes is an Herculean task in and of itself.

Is it possible for Sanders to miraculously attain once-in-a-century popular support to overcome these hurdles, sidestepping the need to change the landscape? Of course. It's a Lloyd Christmas proposition in which one-in-a-million odds means there's still a chance, but sure. Still, cold hard reality dictates that basic math is the most formidable bulwark against Sanders and the changes he's promising to accomplish as president.

In absence of building a political system and culture more favorable to progressive goals, the Sanders agenda will crash against the shoals of reality. Consequently, Sanders and his supporters would do well to begin to discuss the problems of gerrymandering, the filibuster and money in politics — more so even than they already have. Without those changes, single-payer and the rest of the agenda are dead on arrival.