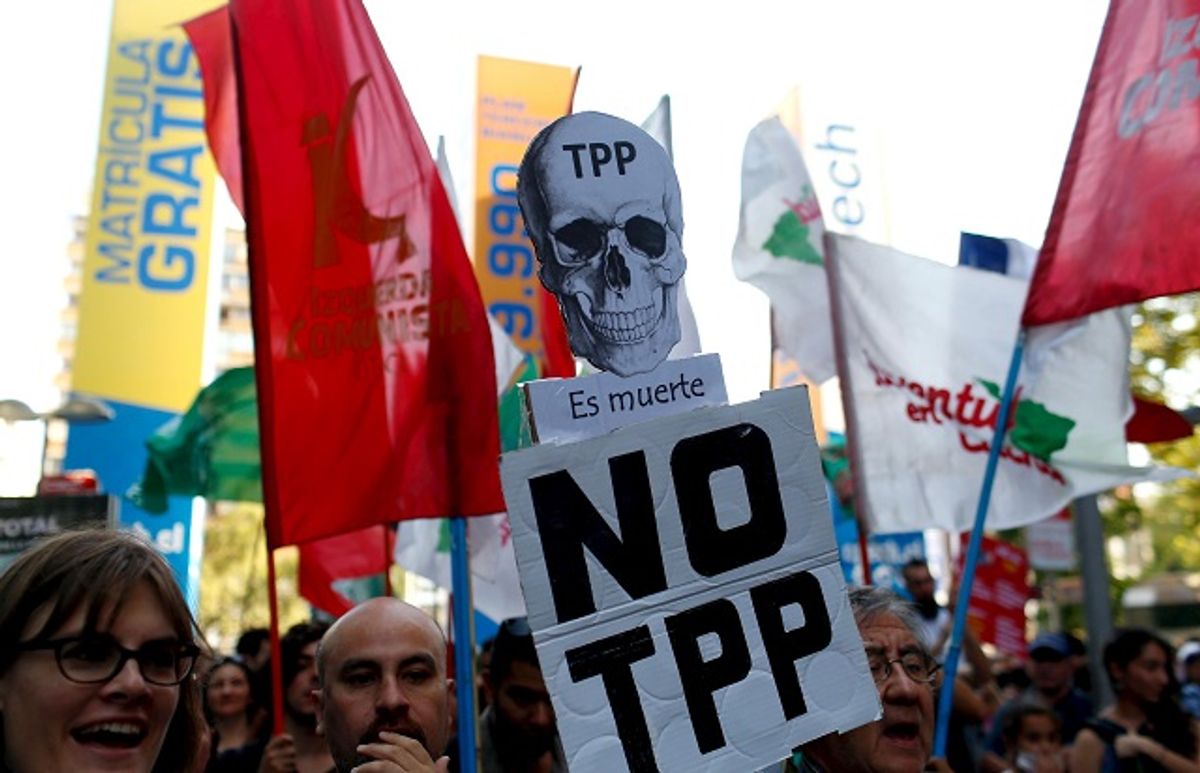 Activists shout slogans during a protest against the Trans-Pacific Partnership and Monsanto in Santiago, Chile on January 22, 2016. The sign reads "TPP is death." (Reuters/Pablo Sanhueza)
--

The massive trade agreement, known as the TPP, involves a dozen countries on both sides of the Pacific Ocean, including the U.S., Australia, Canada, Japan, Mexico, Vietnam and more. Other Pacific Rim nations, such as Indonesia and potentially China, may be able to join the "docking" agreement.

It has frequently been referred to as "NAFTA on steroids," and is based on similar neoliberal, so-called free trade tenets.

Approximately 40 percent of the global economy is represented by TPP nations. The comprehensive deal mandates not just particular trade and economic policies for these countries, but also political ones.

Michael Froman, the U.S. trade representative, joined officials from 11 other countries in the luxurious Sky City Casino in Auckland, New Zealand to sign the deal on Wednesday night (Thursday morning in New Zealand time). The leaders were met with large protests.

Demonstrations were held in numerous cities throughout the world on Wednesday. Thousands of protesters amassed outside of the signing ceremony in Auckland. Activists blocked a major intersection in every direction and recited anti-TPP chants. Large numbers of police amassed, and there were reports of brutality and repression of the peaceful protesters.

The tag #TPPANoWay (in some other countries the deal is referred to as the Trans-Pacific Partnership Agreement, or TPPA) was trending on social media.

Environmental groups warn the TPP — which will boost the trade of oil, coal and natural gas — will encourage and even mandate practices that accelerate climate change and ecological devastation.

"The U.S. trade representative is gambling away our jobs, our clean air and water, and our future by pushing the polluter-friendly Trans-Pacific Partnership, so it only makes sense that it was signed in a casino," remarked Michael Brune, the executive director of the environmental group the Sierra Club in a statement.

"Signing the TPP is Russian roulette for our economy and our climate," he added. "Today's trade rules are rigged, like a bad game of blackjack, to favor powerful big polluters and other greedy corporations.

Brune cited the fossil fuel company TransCanada's lawsuits against the U.S. government. After the Obama administration rejected the corporation's proposed Keystone XL Pipeline on environmental grounds, it filed legal action under NAFTA and demanded $15 billion for not just the cost of the pipeline (which was estimated at just $3 billion), but also for the profit it thinks it could have hypothetically made in the future for the lifetime of the pipeline had it been allowed.

In order to try to get this $15 billion from U.S. taxpayers, the Canadian corporation will be going not to a U.S. court, but rather to an extrajudicial forum, the investor-state tribunal established by NAFTA. In essence, this is a separate corporate pseudo-court that allows foreign companies to bypass the democratic justice system — and the TPP will only make these undemocratic corporate tribunals more prevalent.

Many activist groups are calling on their countries to renegotiate or even reject the deal, which they say is bad for workers, the environment and the economy.

Congress could still potentially reject the agreement, and is divided on it. Some leaders in both the Democratic and Republican parties are critical of the TPP.

Environmental organization Friends of the Earth likewise cautions that the "TPP will deregulate protections for peoples and environments and force governments to pay corporations and wealthy investors for the cost of complying with environmental and public interest safeguards."

Despite the fact that the TPP is more than 6,000-pages long, addresses a wide variety of issues and mandates pro-fossil fuel economic and political policies, it does not mention the words "climate change" once.

"The TPP contains all the worst elements of previous so-called 'free trade agreements,' plus new provisions for dirty energy companies that care little about the existential threat posed by climate change," remarked Friends of the Earth President Erich Pica in a statement.

Labor groups have joined environmental groups in condemning the neoliberal trade agreement, which they say will undermine workers' rights, hurt unions and organized labor, lower wages and lead to more outsourcing of jobs.

"It's a corporate dream but a nightmare for those of us on Main Street," Chris Shelton, president of the Communications Workers of America union, said of the agreement.

Other, less traditional groups have mobilized against the TPP as well. The American Friends Service Committee, a Quaker peace and social justice organization, has been particularly outspoken about the TPP, which it warns "will endanger our environmental protections, deepen inequality and hand more power to multinational corporations."

The TPP is modeled on former neoliberal trade agreements like NAFTA. The American Friends Service Committee stresses that NAFTA led to "economic devastation" in much of Latin America, and the TPP will only "perpetuate the same disastrous policies."

"Over 600 corporate advisers participated in the negotiations, shaping the agreement to benefit themselves," said Kathryn Johnson, the policy impact coordinator for the organization. " This pact put corporations firmly in the driver's seat for creating health, environmental and economic policies around the globe."

She added, "It's little wonder that the TPP is practically a corporate wish list."